As he came out of the temple, one of his disciples said to him, ‘Look, Teacher, what large stones and what large buildings!’ Then Jesus asked him, ‘Do you see these great buildings? Not one stone will be left here upon another; all will be thrown down.’

When he was sitting on the Mount of Olives opposite the temple, Peter, James, John, and Andrew asked him privately, ‘Tell us, when will this be, and what will be the sign that all these things are about to be accomplished?’ Then Jesus began to say to them, ‘Beware that no one leads you astray. Many will come in my name and say, “I am he!” and they will lead many astray. When you hear of wars and rumours of wars, do not be alarmed; this must take place, but the end is still to come. For nation will rise against nation, and kingdom against kingdom; there will be earthquakes in various places; there will be famines. This is but the beginning of the birth pangs.

‘As for yourselves, beware; for they will hand you over to councils; and you will be beaten in synagogues; and you will stand before governors and kings because of me, as a testimony to them. And the good news must first be proclaimed to all nations. When they bring you to trial and hand you over, do not worry beforehand about what you are to say; but say whatever is given you at that time, for it is not you who speak, but the Holy Spirit. Brother will betray brother to death, and a father his child, and children will rise against parents and have them put to death; and you will be hated by all because of my name. But the one who endures to the end will be saved.

‘But when you see the desolating sacrilege set up where it ought not to be (let the reader understand), then those in Judea must flee to the mountains; someone on the housetop must not go down or enter the house to take anything away; someone in the field must not turn back to get a coat. Woe to those who are pregnant and to those who are nursing infants in those days! Pray that it may not be in winter. For in those days there will be suffering, such as has not been from the beginning of the creation that God created until now, no, and never will be. And if the Lord had not cut short those days, no one would be saved; but for the sake of the elect, whom he chose, he has cut short those days. And if anyone says to you at that time, “Look! Here is the Messiah!” or “Look! There he is!”—do not believe it. False messiahs and false prophets will appear and produce signs and omens, to lead astray, if possible, the elect. But be alert; I have already told you everything.

‘But in those days, after that suffering,the sun will be darkened,
and the moon will not give its light,and the stars will be falling from heaven,
and the powers in the heavens will be shaken.Then they will see “the Son of Man coming in clouds” with great power and glory. Then he will send out the angels, and gather his elect from the four winds, from the ends of the earth to the ends of heaven.

‘From the fig tree learn its lesson: as soon as its branch becomes tender and puts forth its leaves, you know that summer is near. So also, when you see these things taking place, you know that he is near, at the very gates. Truly I tell you, this generation will not pass away until all these things have taken place. Heaven and earth will pass away, but my words will not pass away.

‘But about that day or hour no one knows, neither the angels in heaven, nor the Son, but only the Father. Beware, keep alert; for you do not know when the time will come. It is like a man going on a journey, when he leaves home and puts his slaves in charge, each with his work, and commands the doorkeeper to be on the watch. Therefore, keep awake—for you do not know when the master of the house will come, in the evening, or at midnight, or at cockcrow, or at dawn, or else he may find you asleep when he comes suddenly. And what I say to you I say to all: Keep awake.’ 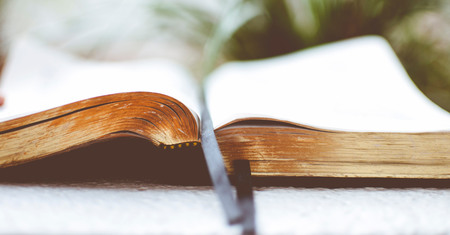