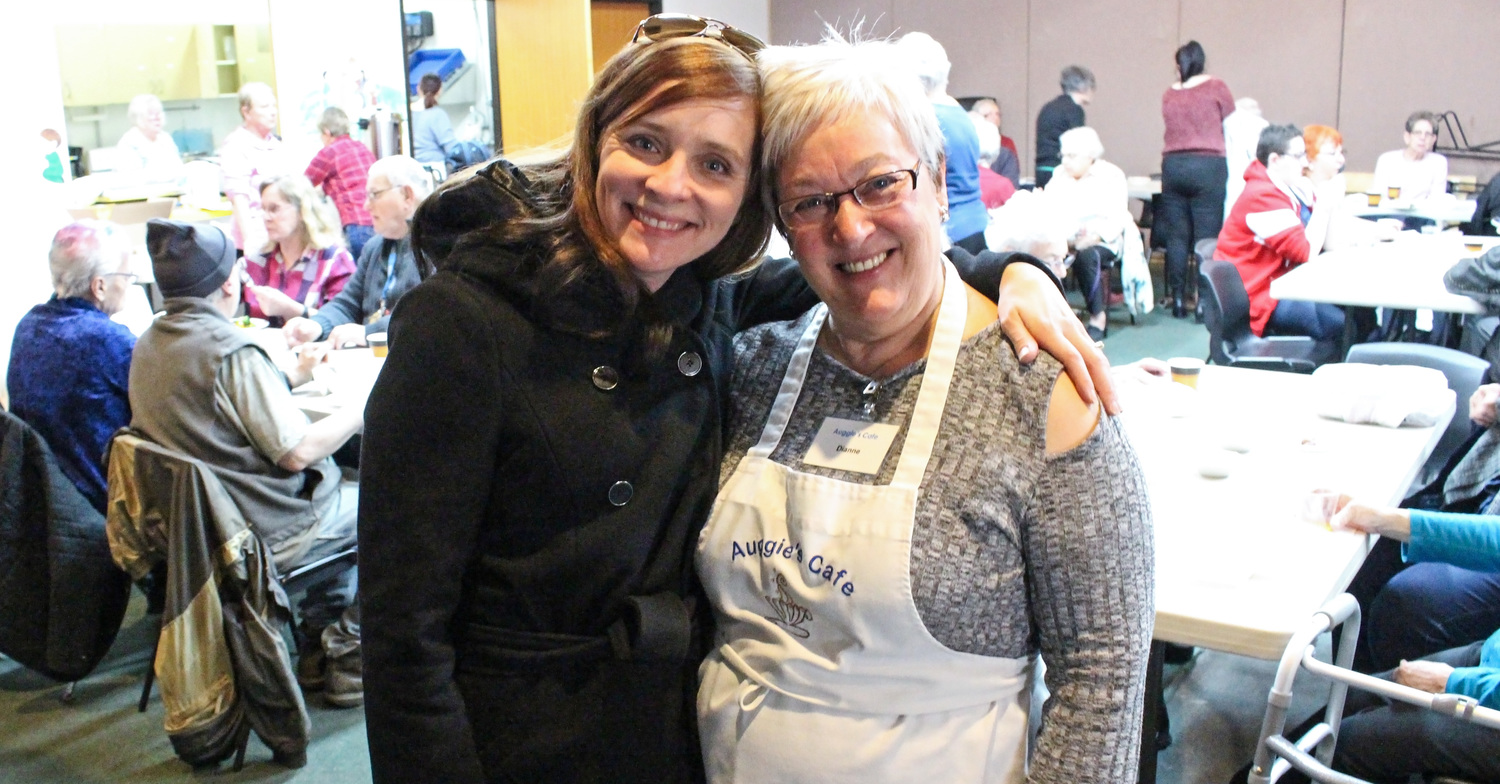 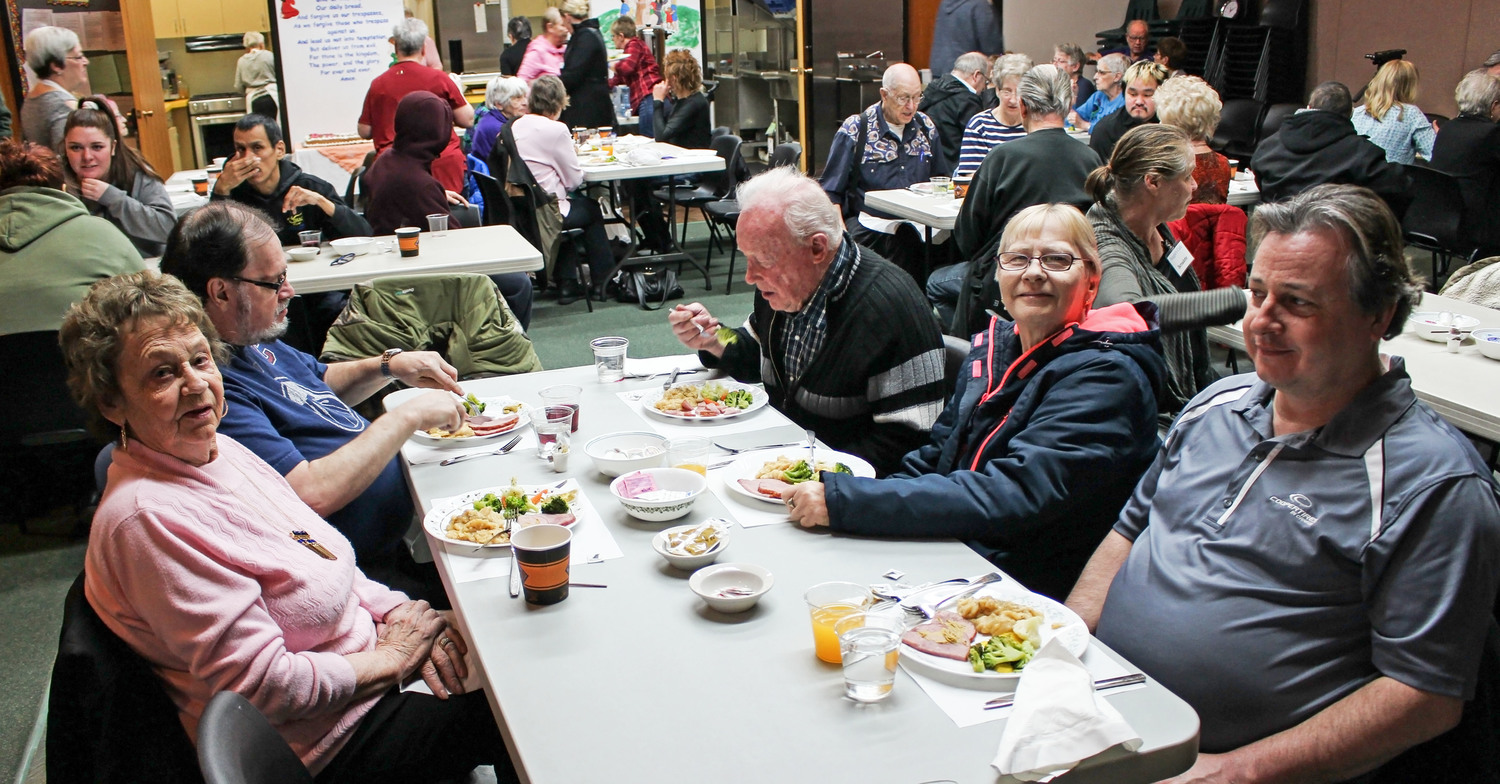 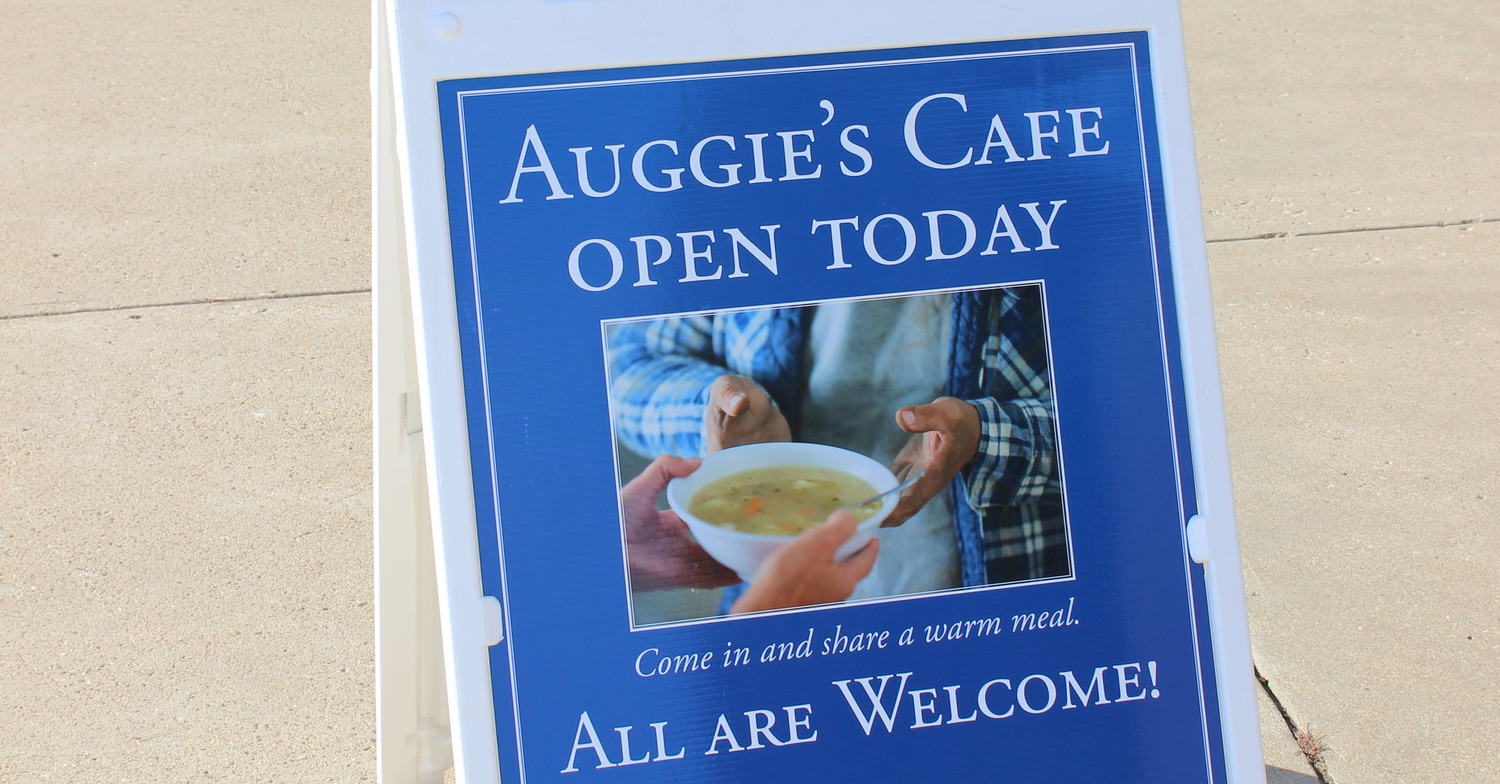 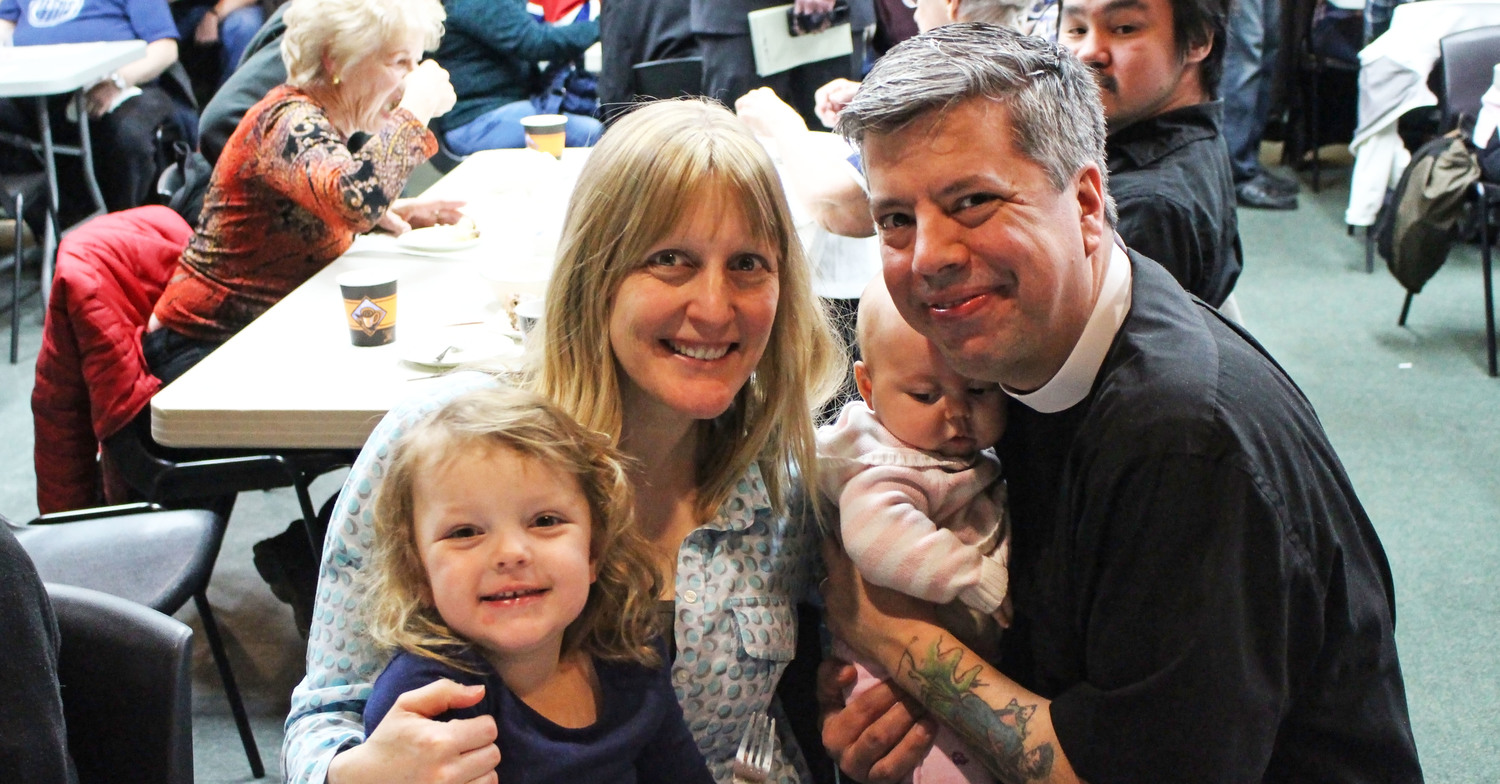 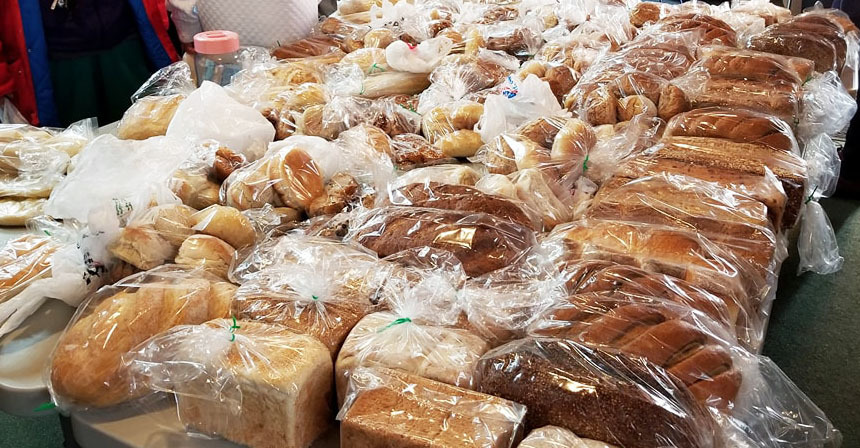 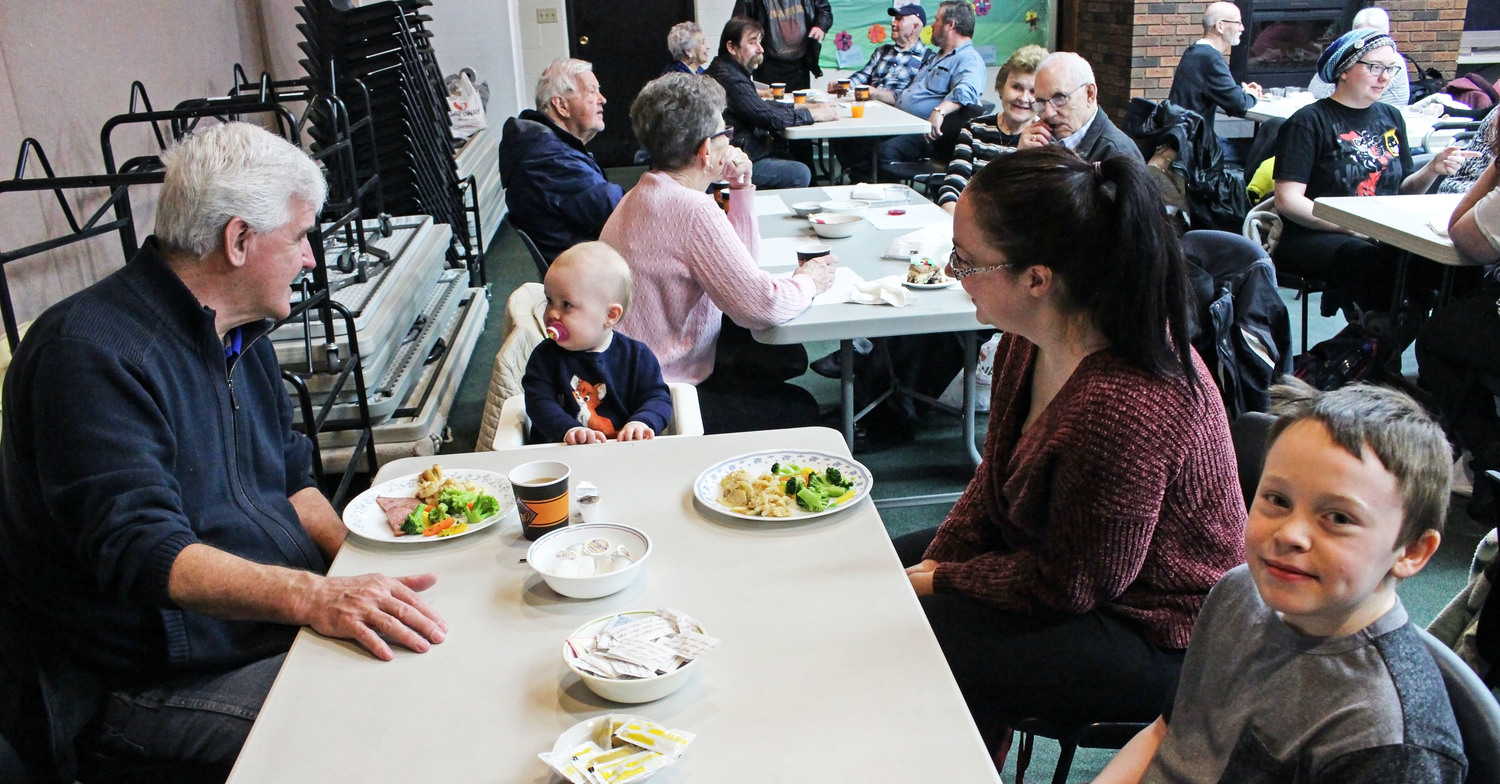 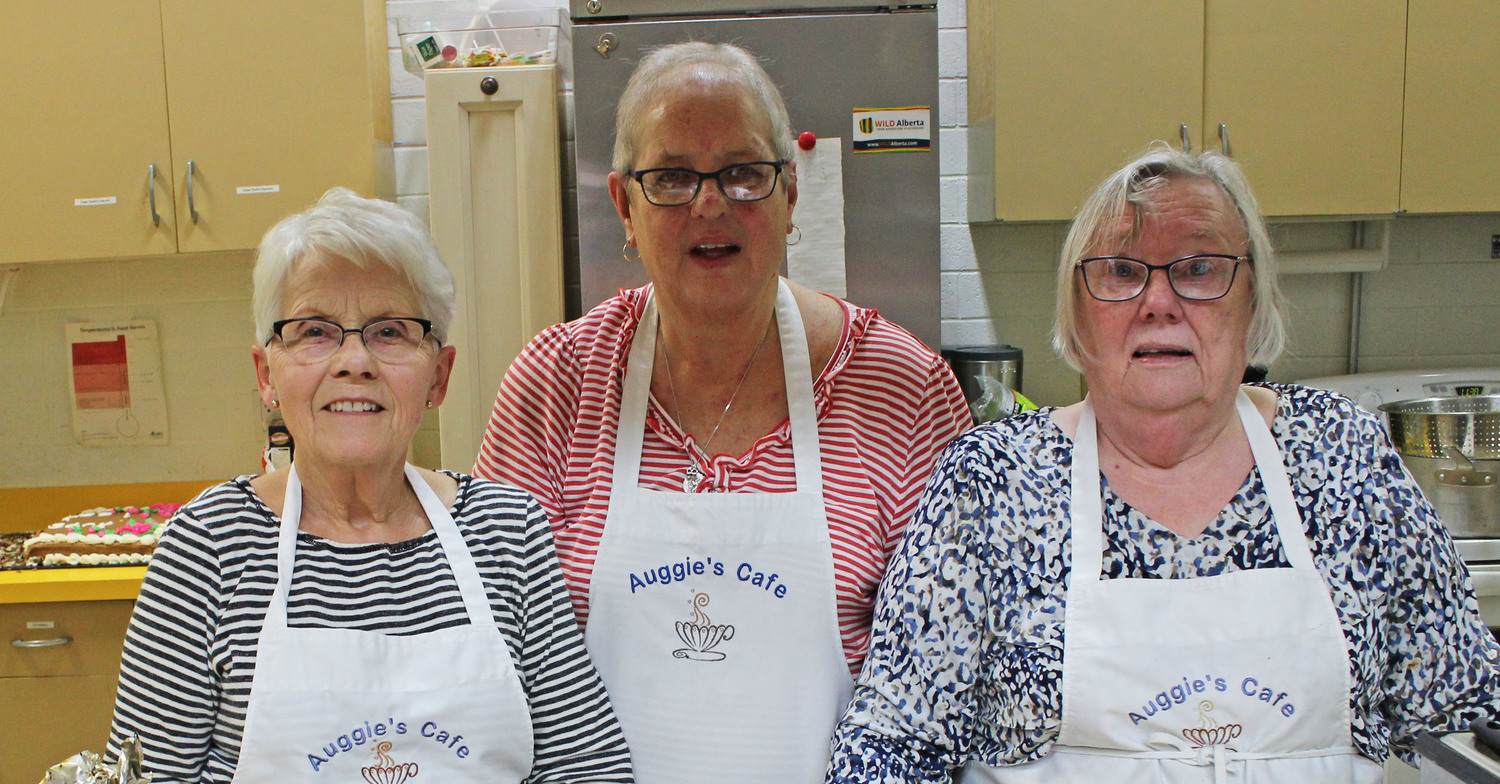 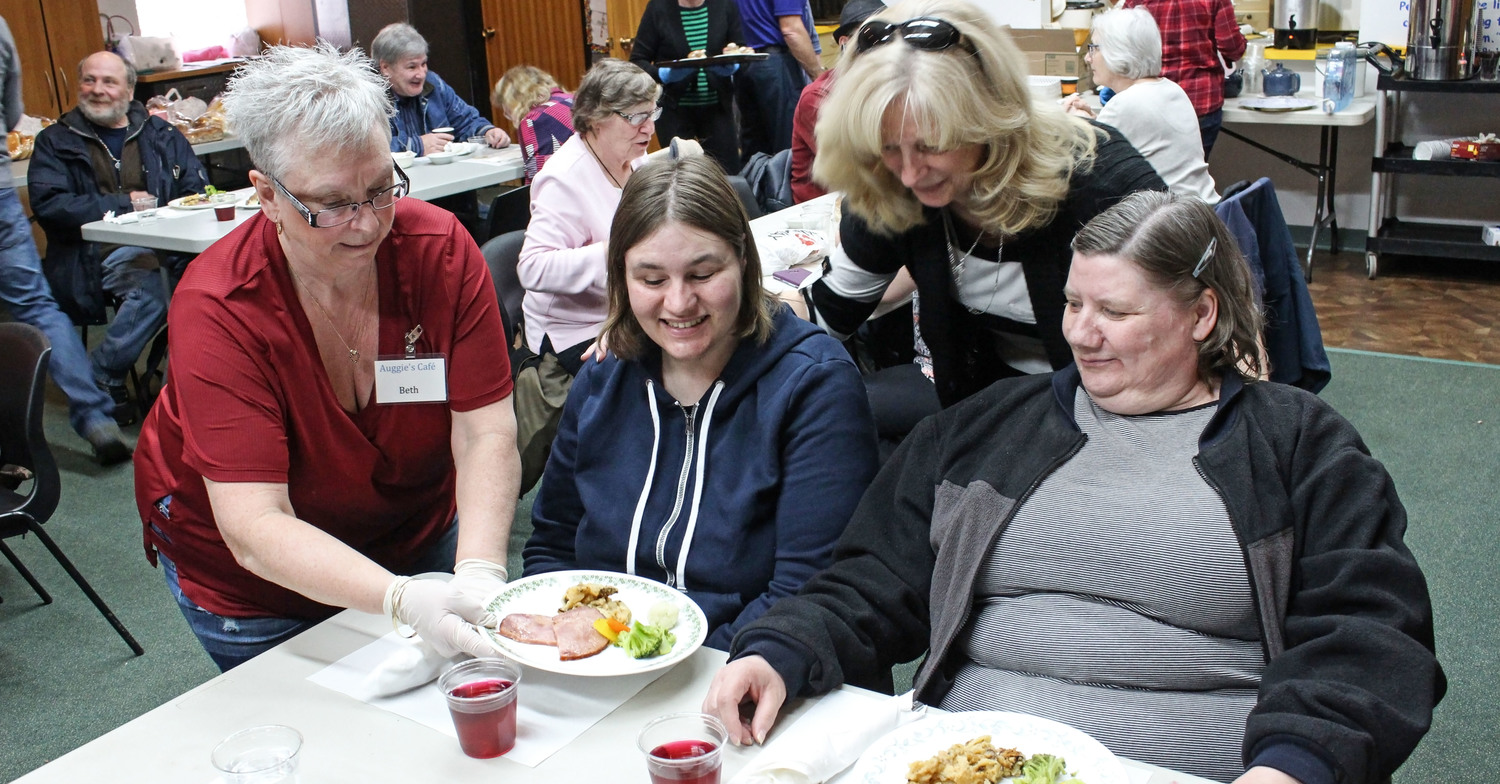 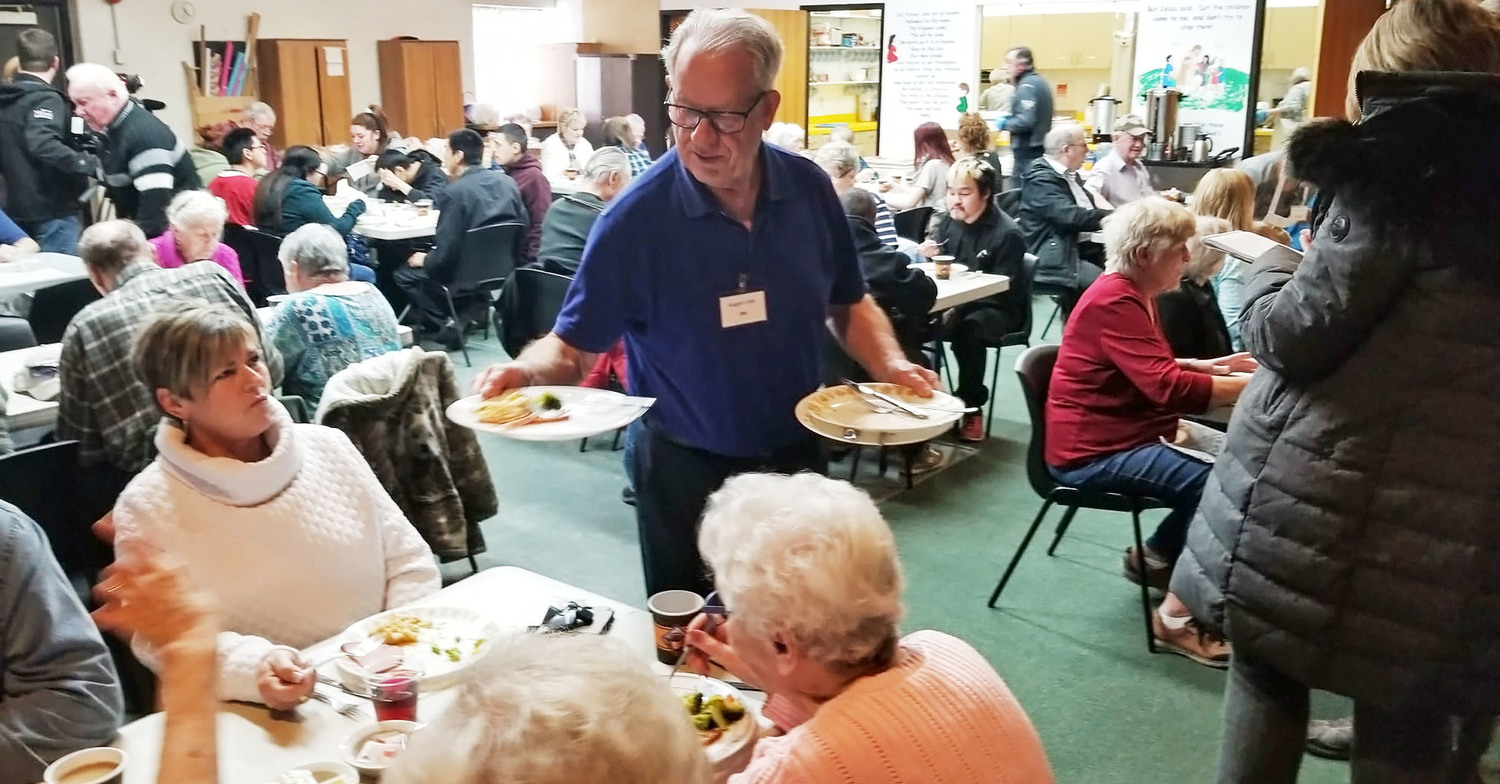 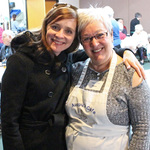 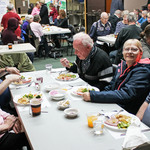 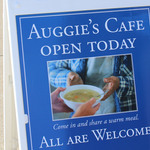 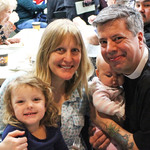 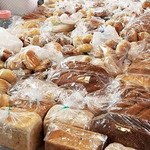 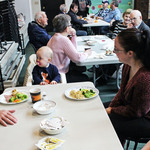 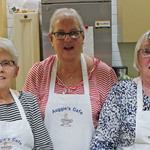 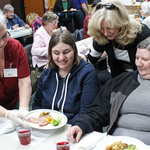 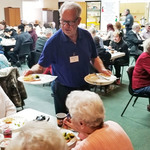 Among the 140 guests who were welcomed with a warm hug for lunch at Auggie’s Café Tuesday, March 13, was a man named Paul Lenny.

Lenny became the focus of several news stories, when Amanda Wilhauk wrote a Facebook post about her encounter with Paul, a homeless man, on the back doorstep of the Spruce Grove business she runs with her husband Trevor. The post to Wilhauk Beef Jerky’s page was shared more than 10,000 times by people around the world.

“We made a post last week, asking for help for Paul and other homeless people in our area, and you literally spread that EVERYWHERE!!” said Amanda in an update March 17.

The story has helped bring awareness to the existence of homelessness and poverty beyond the boundaries of large urban centers like Edmonton, in rural communities like Spruce Grove, Stony Plain and Parkland County.

The Wilhauks started a collection for Paul and others in need. After seeing the news stories, people stuffed the collection boxes with giftcards and money. As of March 17, donations totalled more than $11,300, which the small business will match best it can. “It may take a bit longer than we thought!” said Amanda. “We will make sure all of your donations going forward are given directly to the people that need them the most,” she said.

“We want to let you know that we have seen Paul again since that post went viral. We took him to Mark’s Work Warehouse and said he could pick out whatever he wanted. He went straight to the sock section and we said…You can have more than just socks.”

There is no homeless shelter in Spruce Grove and the donations will be shared amongst four Parkland County agencies and organizations, including Neighbourlink, Homeless Link Alberta, the Parkland Foodbank and Auggie’s Café, a ministry of St. Augustine’s Parkland Anglican Church.

More than a soup kitchen, Auggie’s is a community made up of people of all ages, from all walks of life. In March, 2011 Auggie’s began welcoming its Spruce Grove neighbours for a free lunch meal every Tuesday. Over the last seven years the number of guests seeking food and fellowship at Auggie’s each week has grown from six to 120.

“This is a very good place to come and meet people,” said Ken Lindstrom, He and his wife Mary started attending regularly two years ago after they noticed an ad on the bulletin board in their apartment building. “The atmosphere is lovely and the food is great.”

Auggie’s ministry is supported by a strong network of community partnerships. Local businesses donate food and volunteer to help in the dining room. Not long ago, Amanda and Trevor from Wilhauk Beef Jerky, located “about 20 steps from the church,” helped in the kitchen.

“My husband and I believe at the end of life what we have left is what we’ve given away,” says Amanda.

“This is really an extension of our relationship with God - the mission and discipleship of the church,” said the Rev. Billy Isenor, who was asked to offer thanks at 11 o’clock for the Auggie’s ministry. “For some people this is church. If you look around,” he says motioning to the crowded room abuzz with conversation, “this is fellowship – a gathering of community in a primal way – where people call each other by name.”

Violet Holden comes to Auggie’s to see her friends. A member of St. Augustine’s Parkland, she remembers when the ministry began. “Our parish was volunteering at the Mustard Seed in Edmonton, when someone said, ‘why don’t we do this in our community? There must be a need.’” In honour of her birthday in April, Violet has donated the meat for an upcoming Auggie’s lunch. “For the last five years, rather than have my kids take me out for dinner, I’ve asked them all to contribute,” she says.

Auggie’s Café Volunteer Coordinator, Dianne Brown, works with a network of 100 supporters from the church and community-at-large. In addition to those who have a role on Tuesday (either by cooking, setting up, cleaning up, greeting, bussing tables, or serving guests) another group of volunteers – Dianne’s Bread Angels” - pick up unsold bread from Cobs bakery every Monday evening. Whatever is not used for lunch or taken home by Auggie’s guests, the team delivers to nearby outreach high schools, along with the jam, peanut butter, Cheese Whiz and honey, the parish has been collecting during Lent. “Today we had three new volunteers walk through the door and fill out applications,” says Dianne.

Jan Vanderbij began helping out at Auggie’s when he was searching for a meaningful way to spend his retirement. “A few of us volunteer,” said Jan, a member of the local Rotary Club, one of the many organizations that supports Auggie’s Café.

“Although we gather people around the table, the most important part of what we offer is hope, trust, dignity and joy,” says Dianne. “Every single person in this room willingly gives and shares of those things. We live in a society where community is a rare commodity. Whenever I’m having a tough day,” she says, “I think of the laughter and voices we’re hearing today in this place.”

“Auggie’s is an institution, it’s been around so long,” said Bill Almdal and Marlene Dalgleish of Neighbourlink Parkland, one of the ministry’s 40 service club and business partners.

“To be able to tell our clients that they can get a free meal at Auggie’s right across the street is a great resource,” says Marlene, who is Ministry Director. “There’s no stigma and no cost.” It is difficult to know how many people are homeless in Parkland County (at last count the figure was around 135). “Homelessness can mean someone sleeping beside a bin, someone sleeping on a couch, or someone living in their car. They all have their own story and not everyone comes to us for help,” she says. “But today I’ve reconnected with 12 former clients.” Marlene works with one part-time assistant and many volunteers (the organization has its annual fundraiser on April 7) to connect people in need with transportation, food, clothing and temporary shelter, “but we are not a shelter.”

Together Auggie’s Café, Wilhauk Beef Jerky, Neighbourlink and the Parkland Foodbank will continue to serve their neighbours in need.

To meet Paul – the man who inspired Amanda and Trevor Wilhauk to take action, watch the stories on CTV and Global.