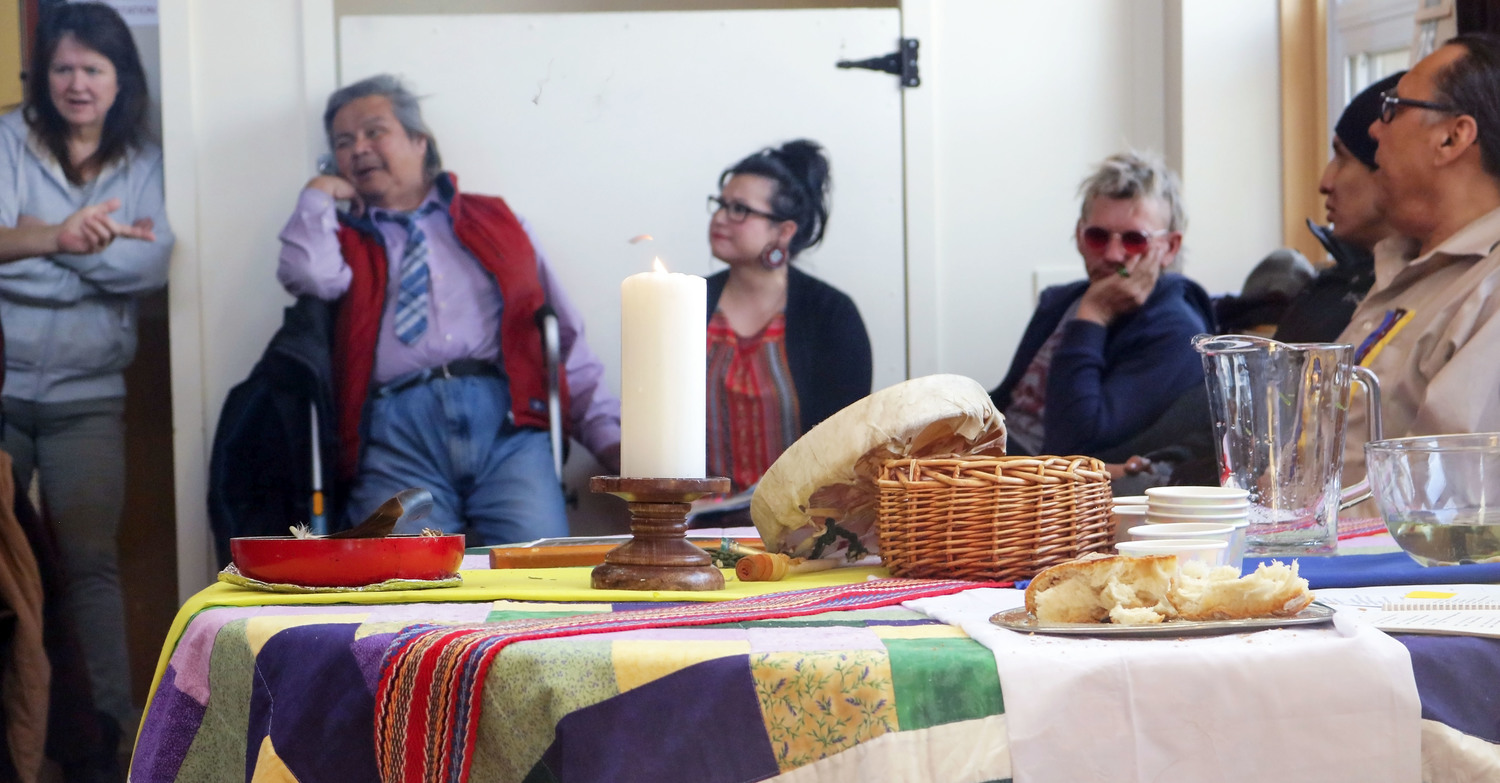 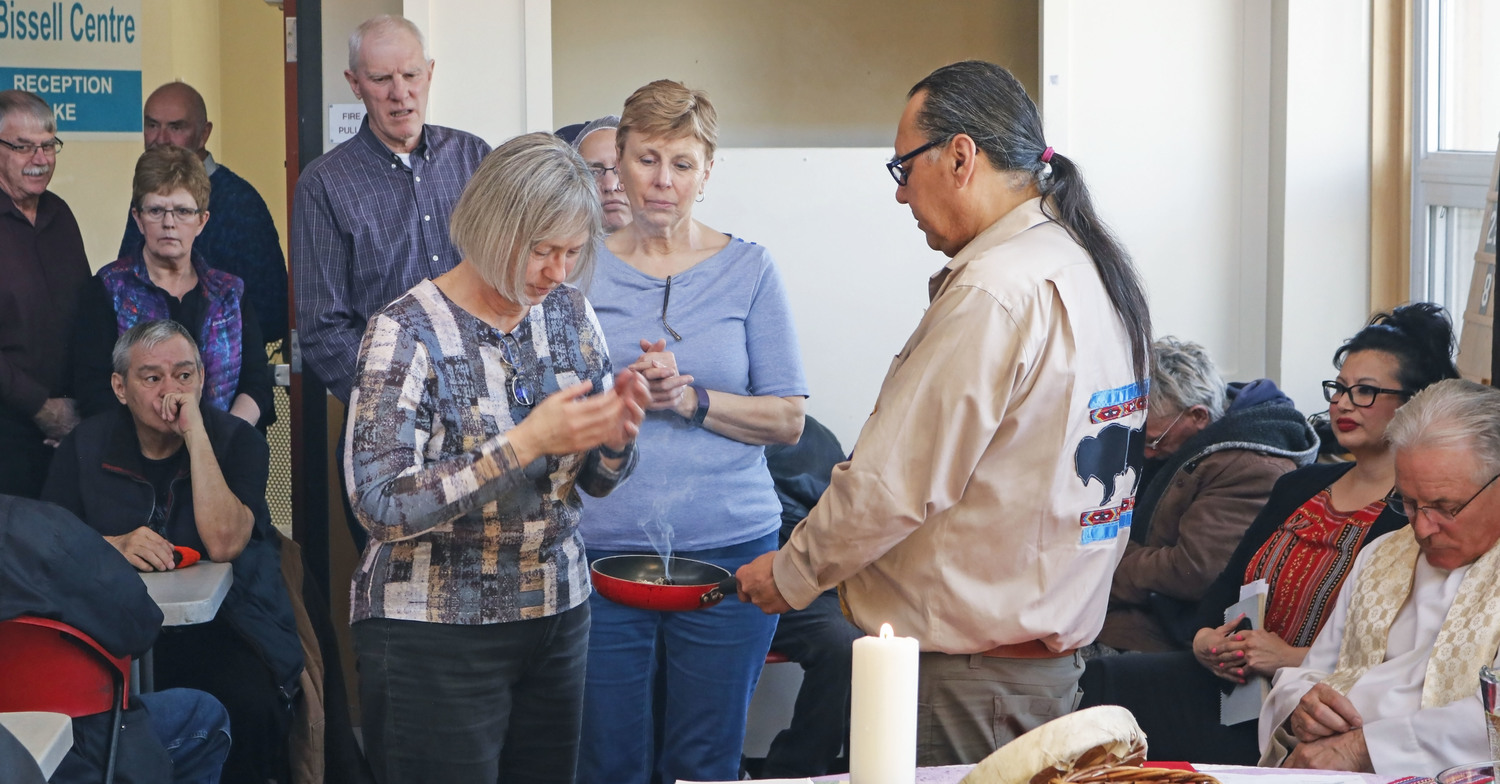 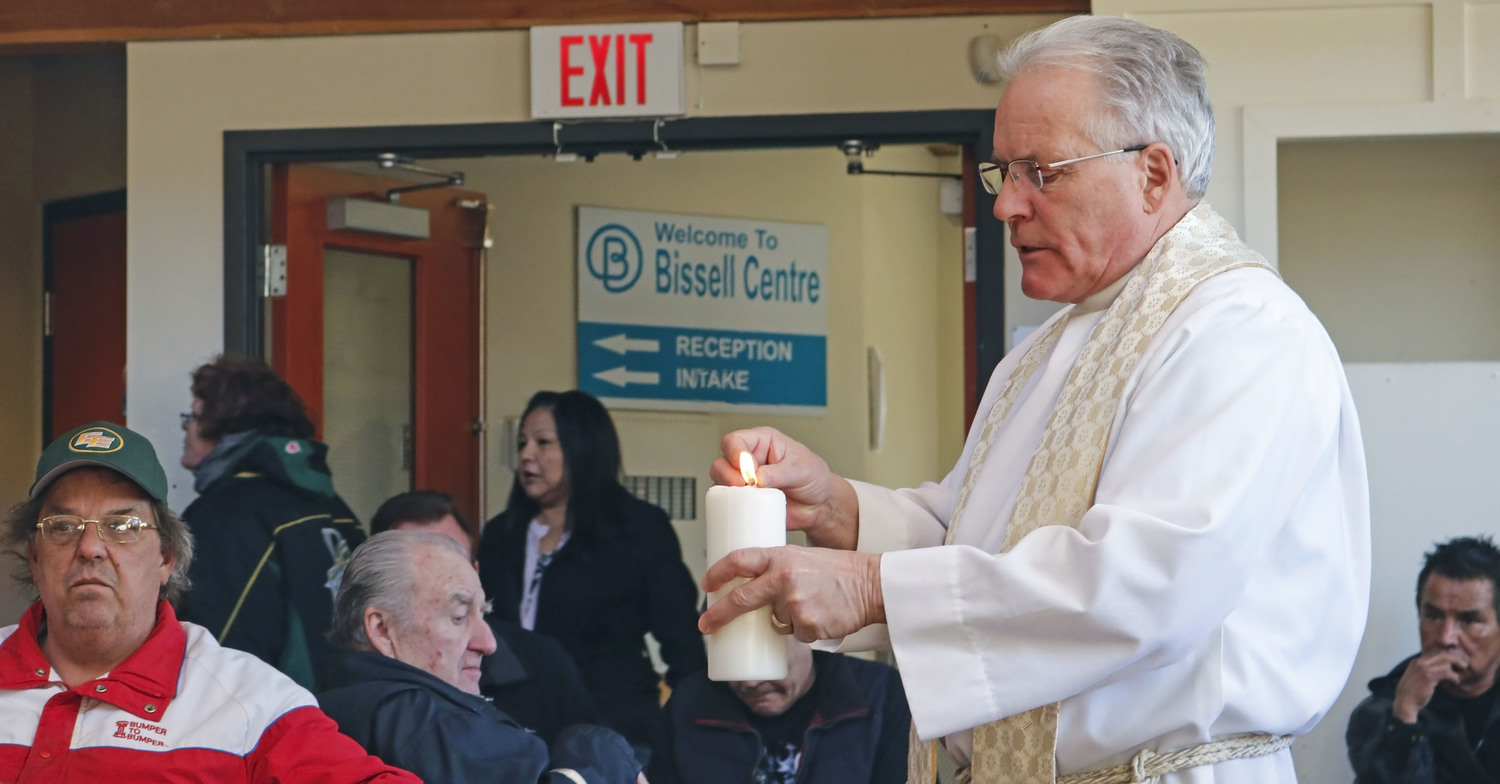 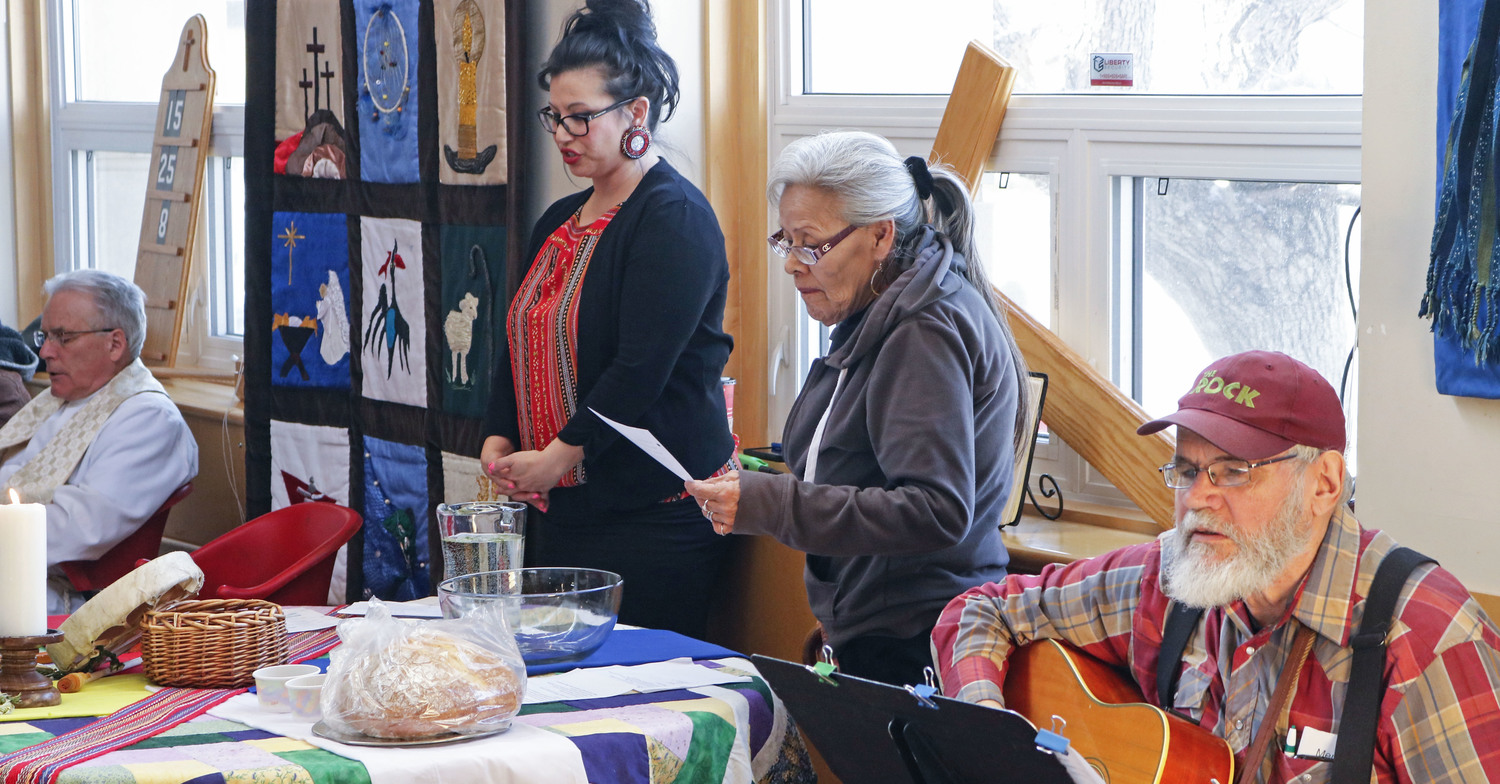 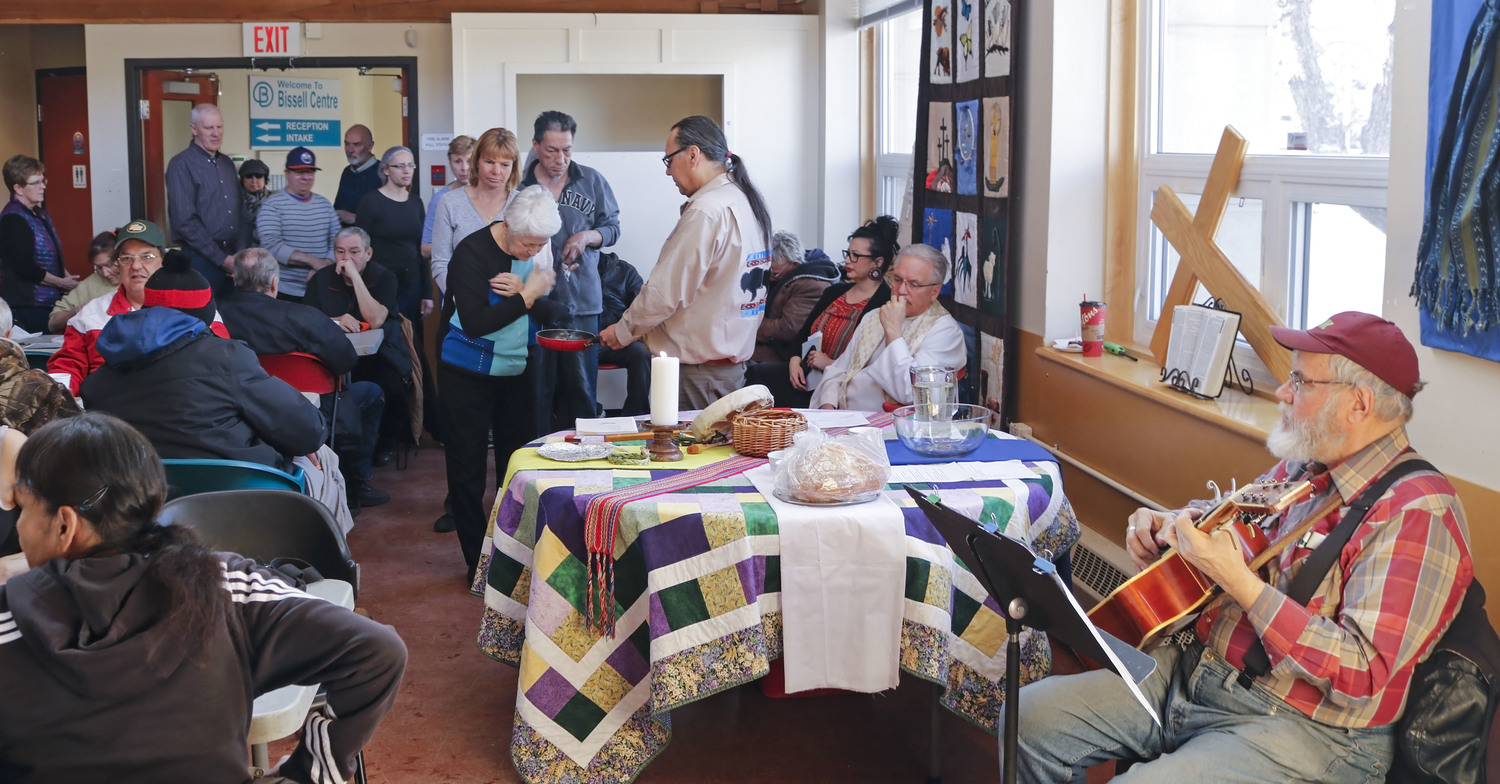 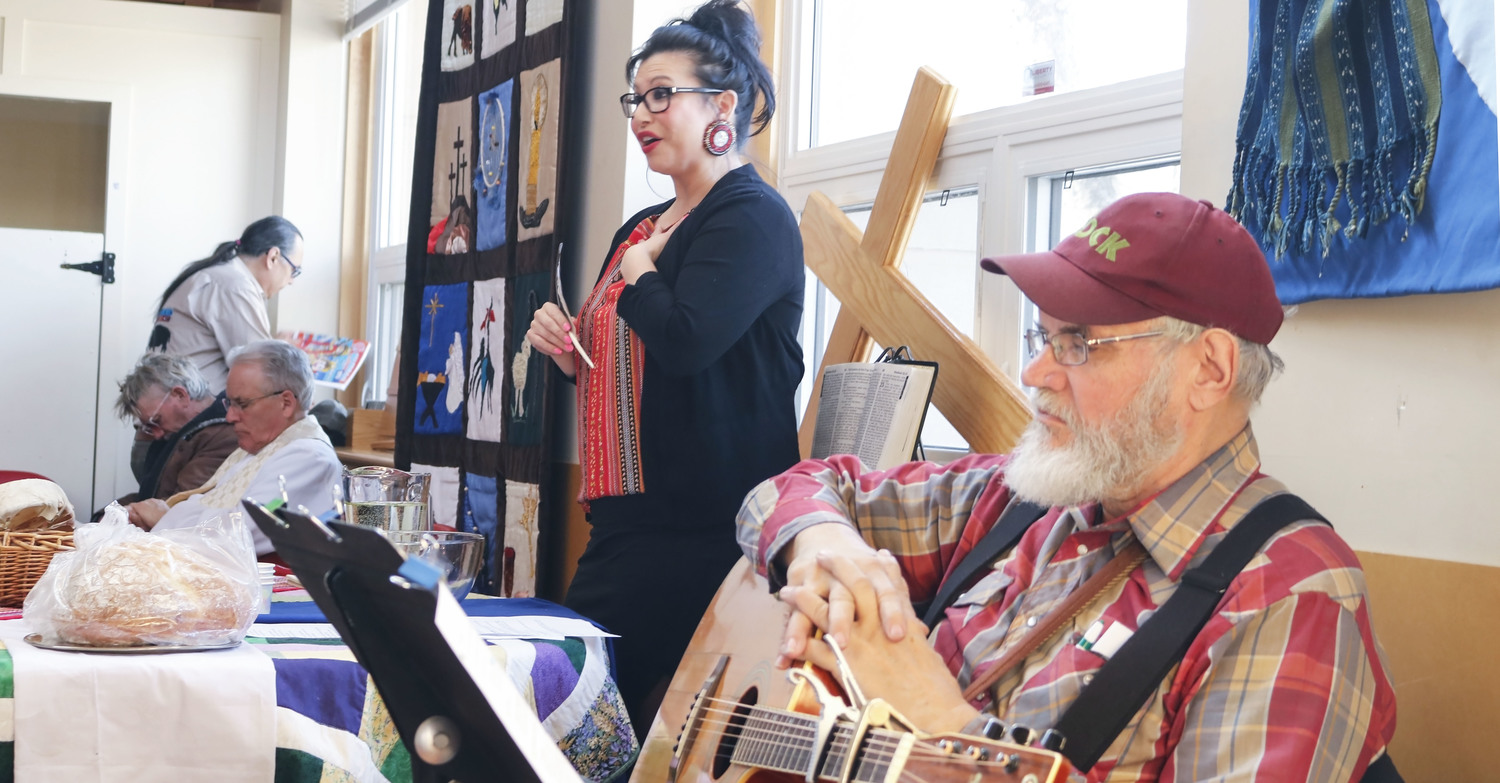 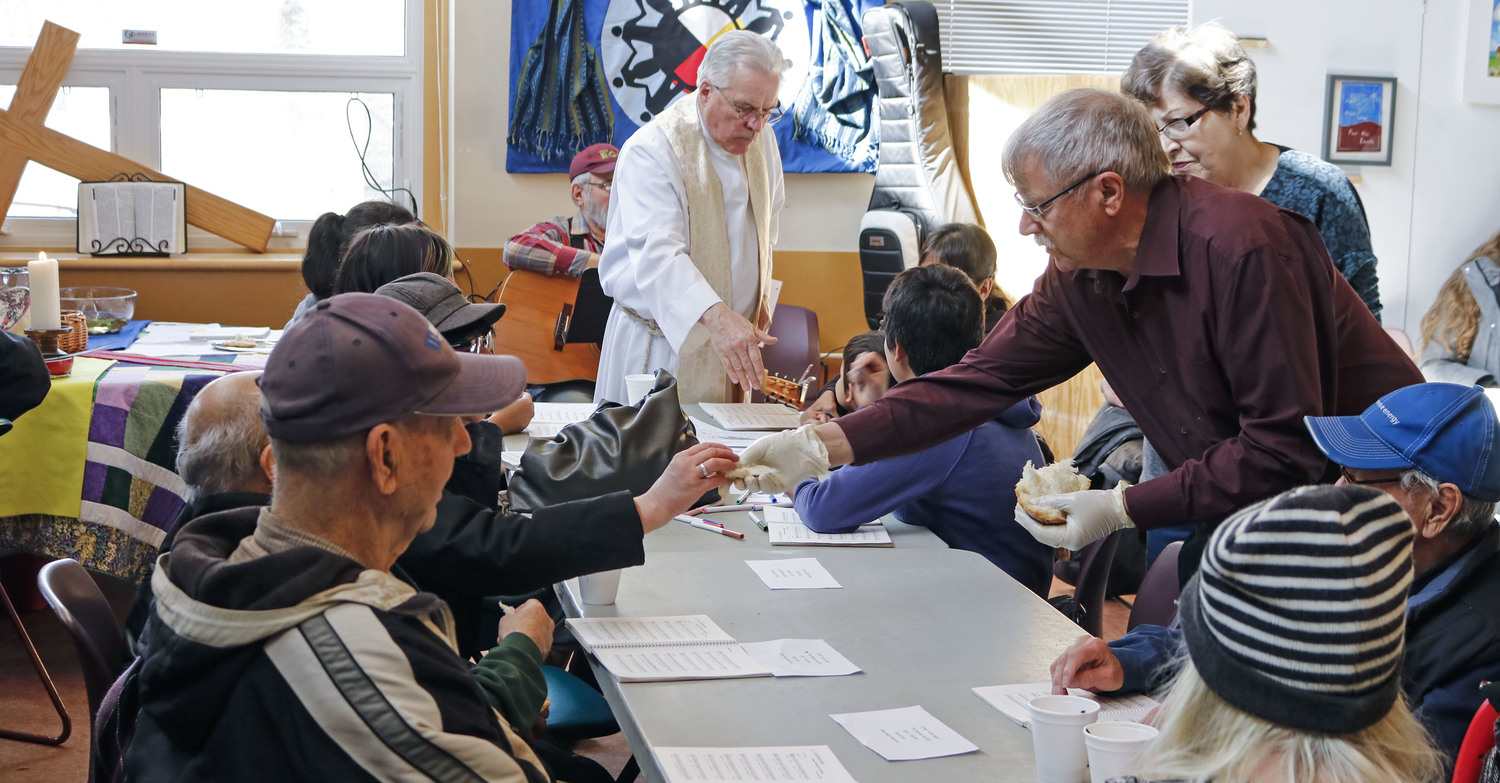 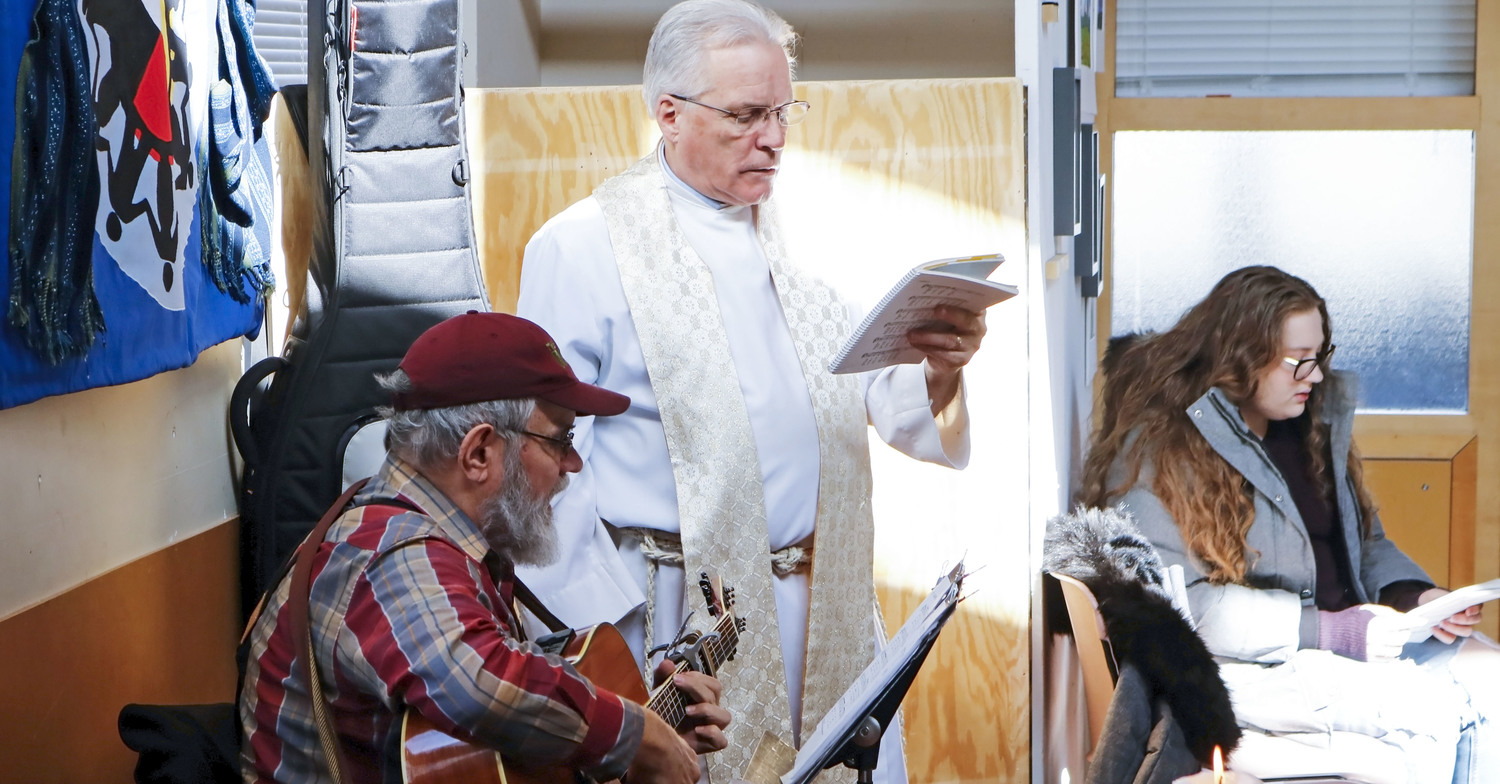 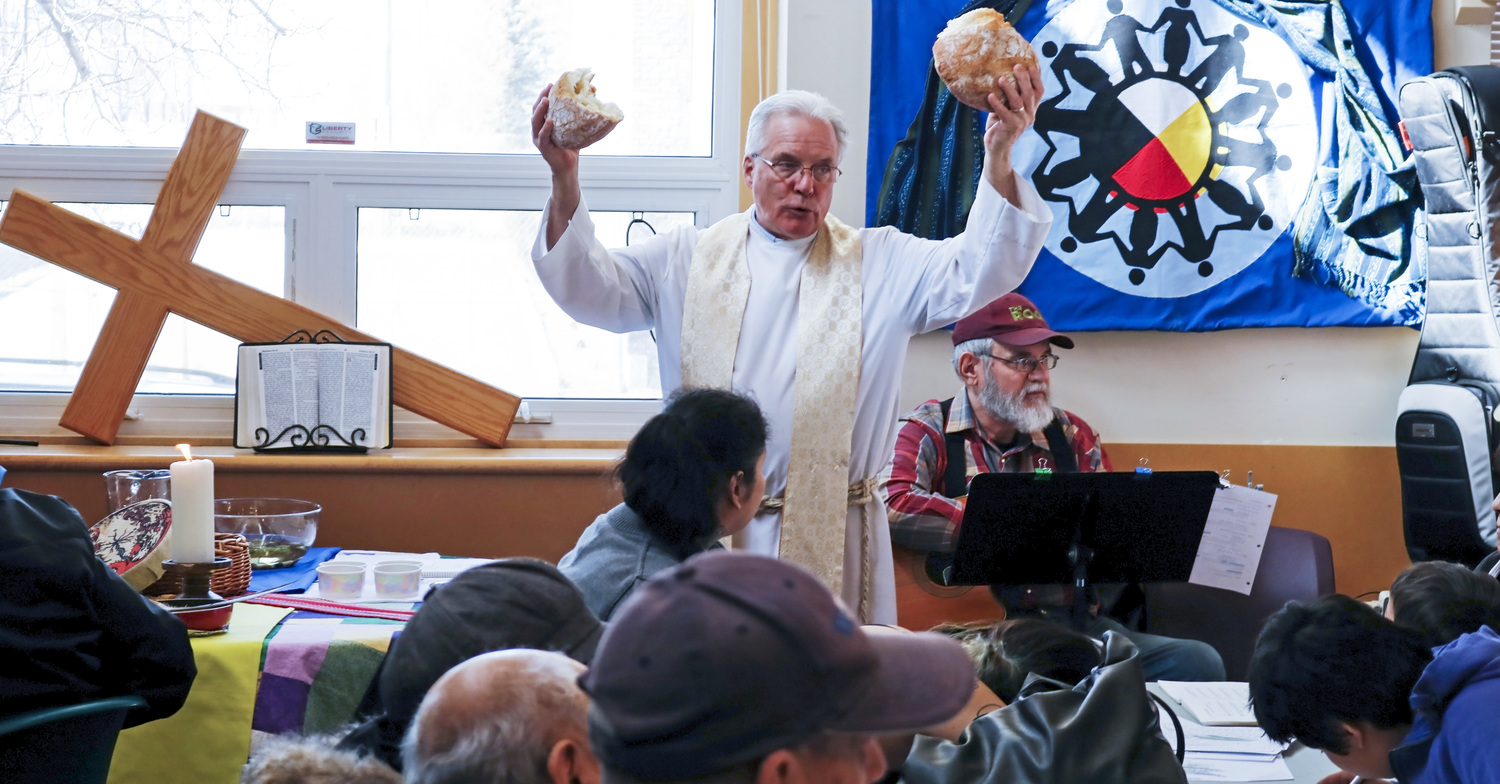 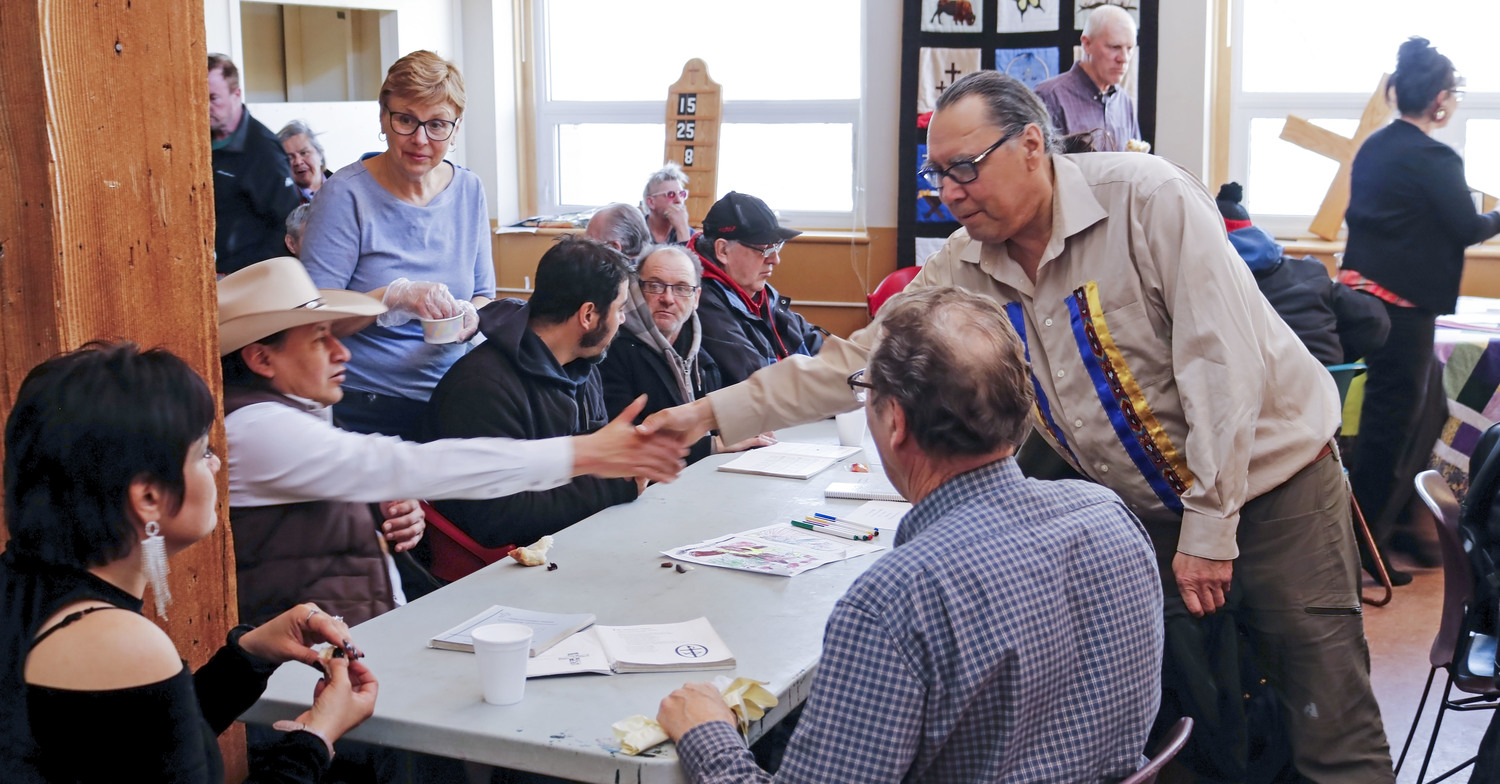 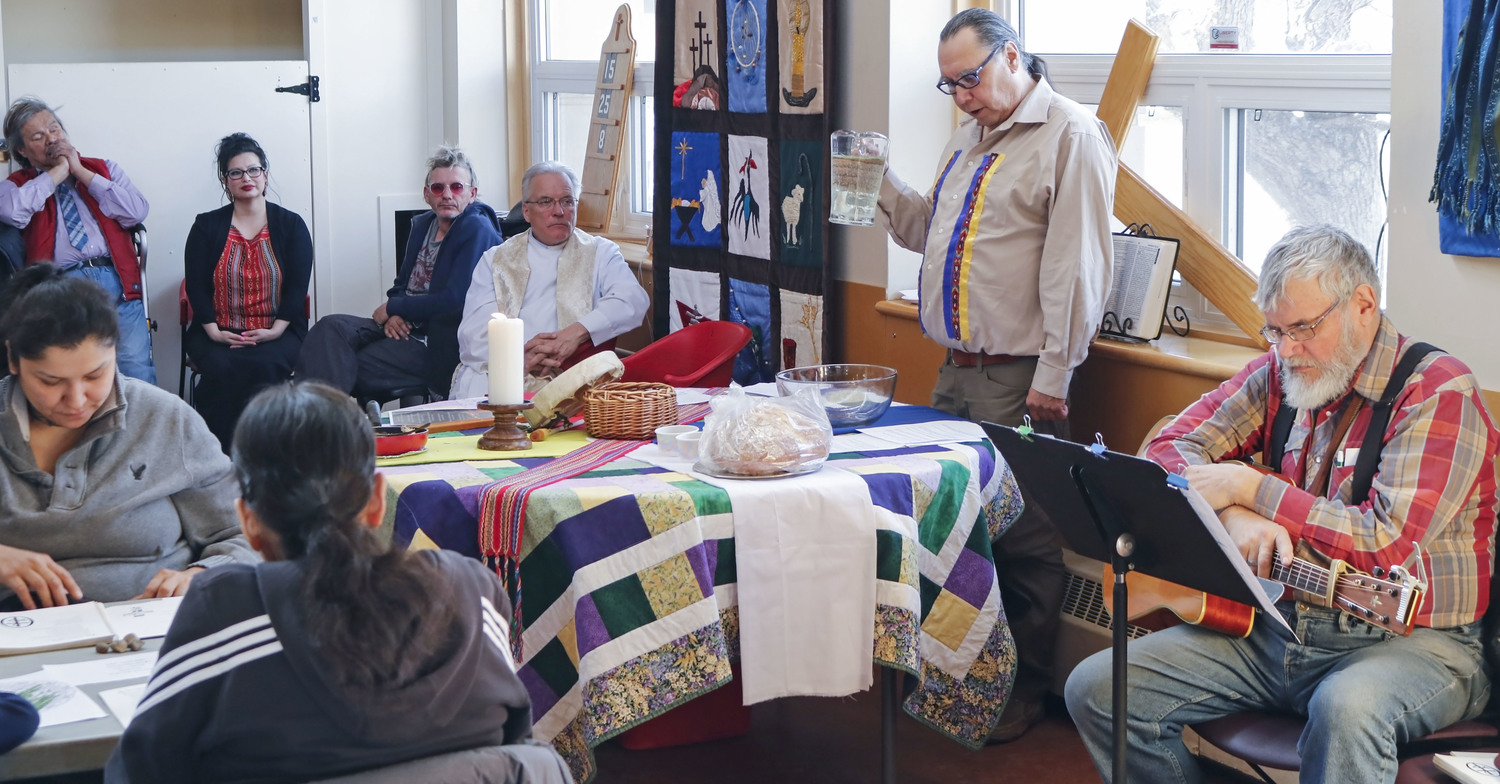 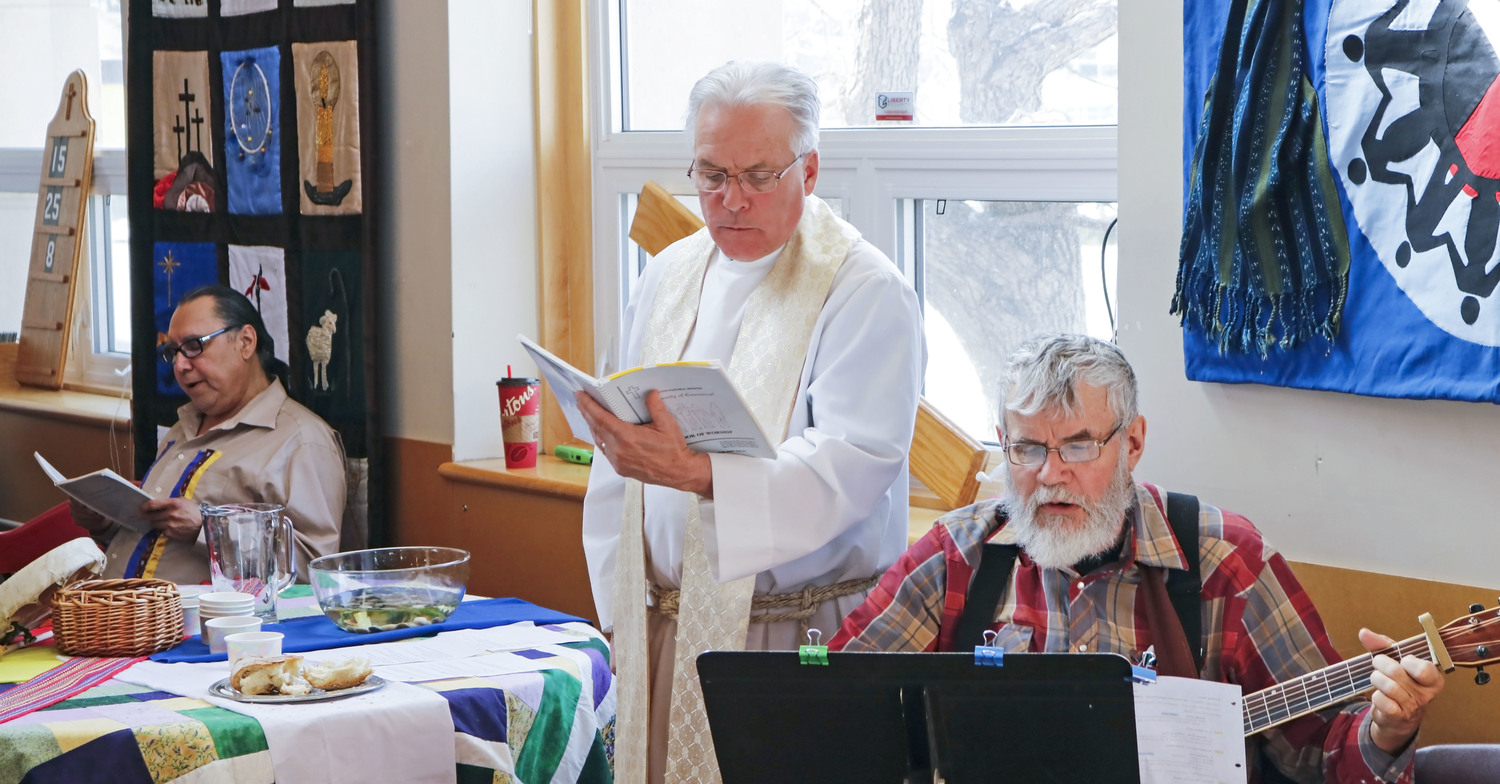 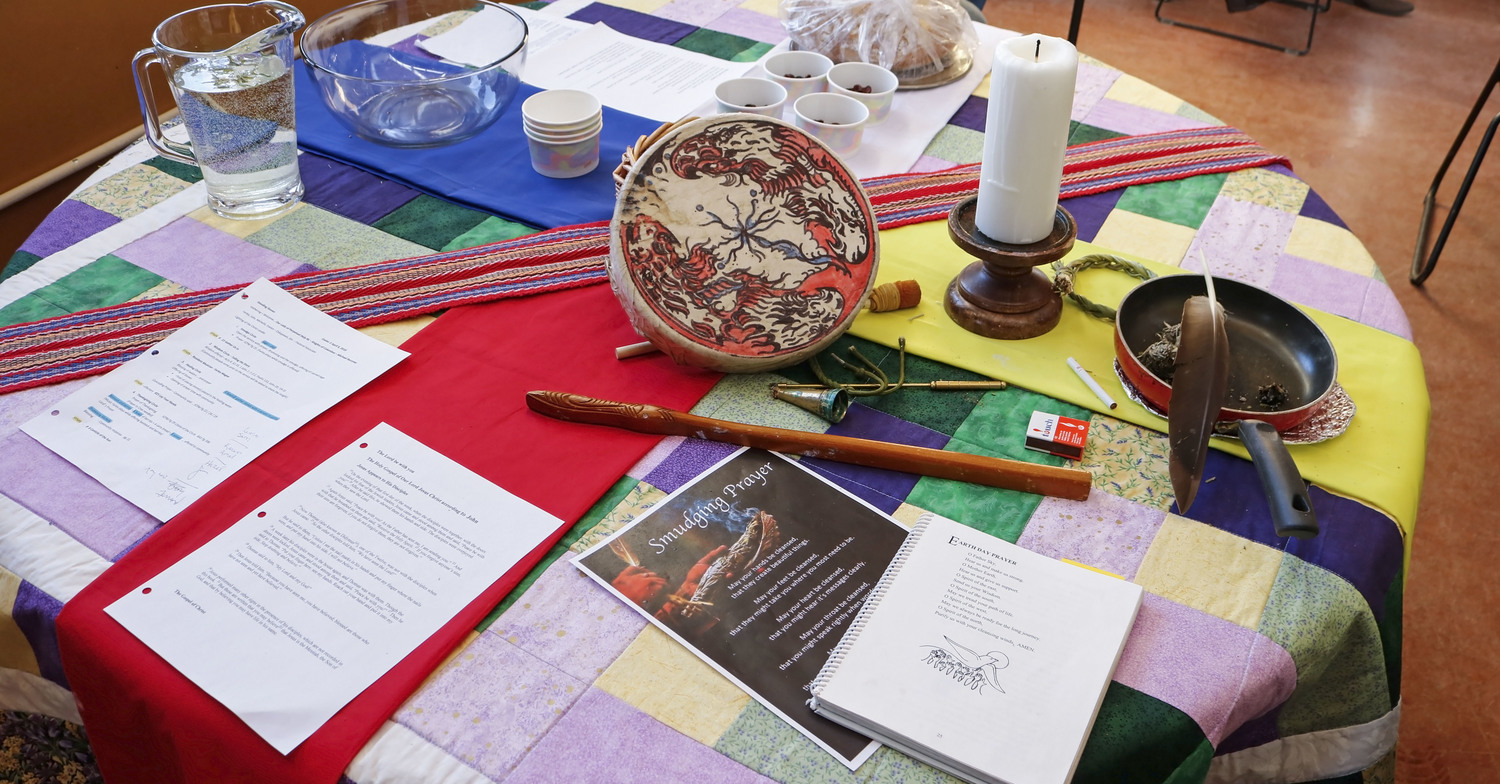 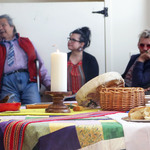 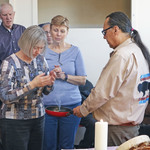 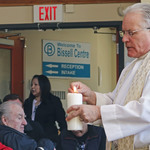 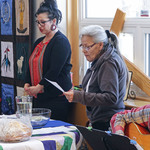 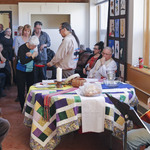 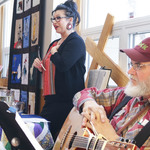 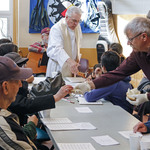 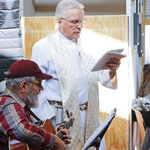 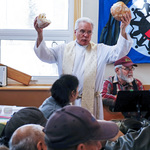 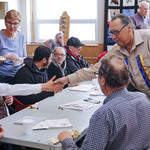 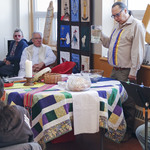 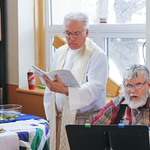 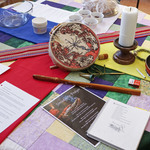 Created by Indigenous Ministries Archdeacon Travis Enright, Standing Stones blends traditional Indigenous spiritual practices (approximately 46% of the population of the inner city is of Indigenous heritage) with traditional Anglican liturgies. Part of the regular worship schedule at the Bissell Centre, Standing Stones is offered on the second Sunday of each month. It is also offered by other Christian worship communities such as the Anglican parishes of St. Faith and All Saints' Cathedral.

The service began with a smudge offered by ICPM Indigenous Helper Gord Holub, a practicum student from NorQuest College. Songs were sung from the Community of Emmanuel Book of Worship, accompanied by Farley Magee on guitar. Elder Dorothy Delorme read the gospel of John 20: 24-29 – the story of Jesus and Thomas.

“As human beings we have doubt and, at times, I have carried doubt,” said Nieviadomy in her homily. “But, we are blessed because we believe in God.” She spoke about attending the funeral of her dear friend Kokum Donna Enright (mother of Archdeacon Travis Enright). “We heard stories of a woman who endured the pain of residential school and, in spite of all she had gone through, had incredible faith. She made sure that the songs sung at her funeral honoured her maker,” she said. “In those moments that doubt seems to overcome our faith, our elders would say, ‘pray a little harder, dig a little deeper, we are blessed people.’”

As sunbeams streamed down from the rafters, the Rev. Rick Chapman lit a candle and asked the community to pray for the Humboldt SJHL hockey team, which was involved in a tragic bus accident two days before the service on April 6; and “those who are no longer with us, especially our friends from the street.”

A large network of churches and service groups support the Emmanuel worship community by providing food and volunteers for the Sunday lunch meal. On April 8, volunteers from Our Lady of Perpetual Help Roman Catholic Church of Sherwood Park and a local chapter of the Knights of Columbus participated in the service by collecting sacred stones (symbolic of our hurts and doubts), from members of the congregation and leaving them at the altar. They also helped distribute bread and berries during communion before serving sandwiches for lunch. This upcoming Sunday (April 22), St. Matthias Anglican and Our Savior Lutheran churches are scheduled to volunteer.

This year, ICPM is celebrating its 40th anniversary as an ecumenical Christian ministry of presence serving the people of the inner city of Edmonton. The ministry was founded in 1978 and today is jointly sponsored by four denominations: Anglican, Lutheran, United and Roman Catholic. In 2017, ICPM helped organize four successful community education and celebration events in response to the TRC’s Calls to Action. The Our Common Ground gatherings focused on prayer, wisdom, healing and thanksgiving. The events were co-hosted with the Anglican Diocese of Edmonton, United Church Edmonton Presbytery and the Moving Forward with Reconciliation group of the United Church.

Michelle Nieviadomy, along with ICPM and Moving Forward with Reconciliation, are continuing the reconciliation dialogue during a Saturday morning small group gathering, "Living the 8th Fire." Upcoming dates are: May 5,  June 2, Oct, 6, November 3 and December 1. See the Indiginews section of the Synod Scene for more information, and watch the September issue of The Messenger for a feature on ICPM, including an article by current Board Chair John Campbell.

To learn more about ICPM, visit their website: www.icpmedmonton.ca or watch this video about Emmanuel Sunday morning ministry .