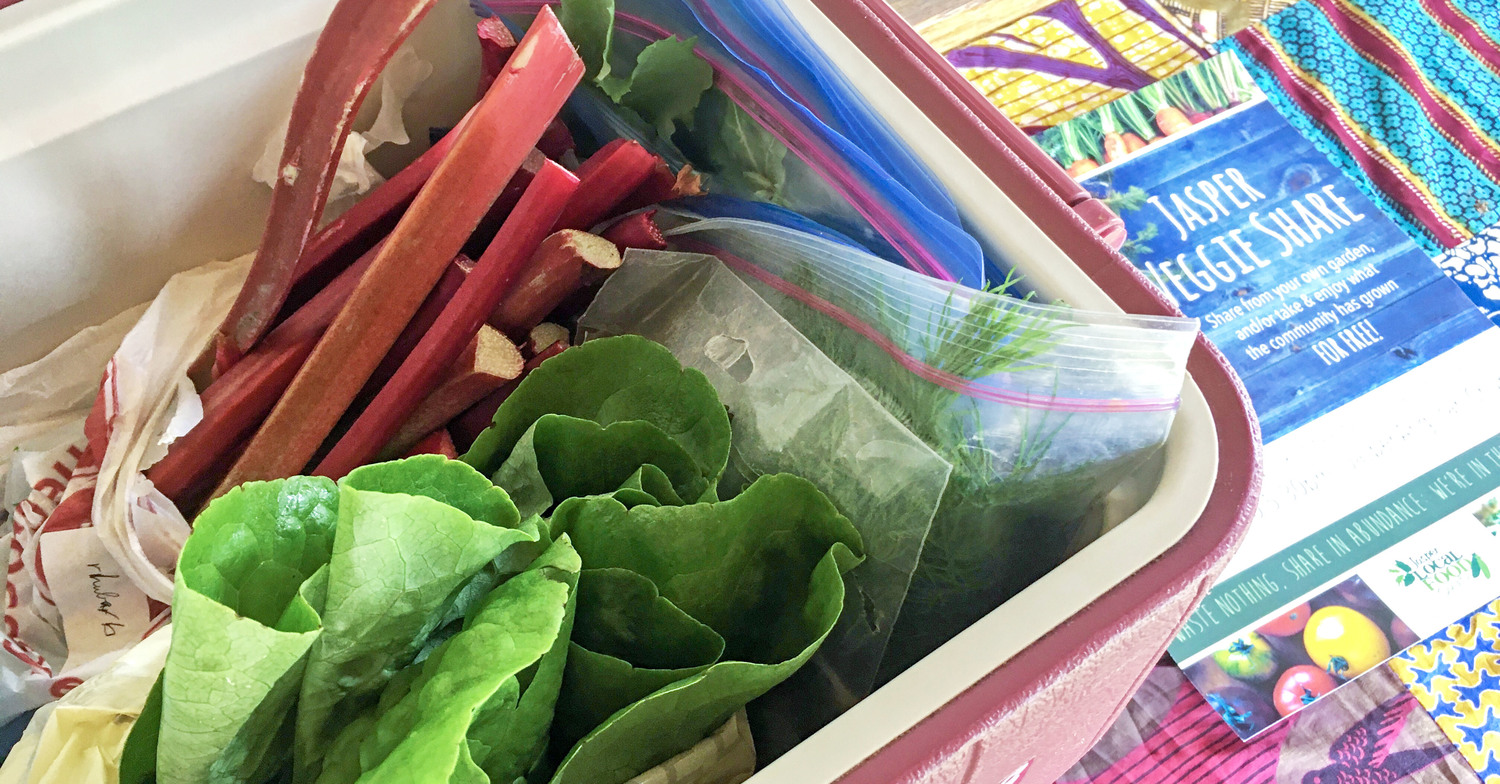 Together a community organisation dedicated to helping people access locally grown food and the Anglican parish in Jasper are encouraging neighbours to share the fruits of their labour.

“It’s been fantastic to collaborate with Andreas,” says Marissa Kidd, vice-president of the Jasper Local Food Society, who recently partnered with the Rev. Andreas Sigrist, rector of St. George’s and St. Mary’s, to offer the Jasper Veggie Share program. The concept is simple: growers and seekers of fresh produce are invited to the church on Thursday afternoons to give or take fruits and veggies.

As much as she is able, Kidd, who is mother to two children ages one and three, works to ease general apprehension about sharing and encourages communities to take control of their food system to “begin to build the future we’d like to see.”

“There should be no stigma in sharing what we have or need,” she says.

Since joining the board four years ago, Kidd has helped start a seed library and has volunteered with the school gardens project. Jasper’s three schools share one large schoolyard where the students are encouraged to help plant and grow gardens.

“Helping our kids connect with nature can be a real challenge in Jasper,” says Kidd who is completing a masters degree in environmental sustainability education with a focus on children’s literature.

“We live in this beautiful, amazing place but the problem with most national parks, certainly this one, is that there are so many regulations founded in the idea that humans are separate from – not an inextricable part of – nature. Our kids are taught not to forage - to be hands-off, as if nature is a living museum, rather than a part of our extended family. The intimacy and interdependence pieces are lost.”

It is this same colonial viewpoint that “underpins the forced removal of Indigenous people whose territory the park now occupies,” she says. “Colonial ways of thinking couldn’t, and still can’t, conceptualise a way of being with nature that doesn’t involve exploitation and destruction.”

Sigrist adds that “as long as we remain distant and lack intimacy with the places where we live (contemporary way of being human), we are prevented from making positive change in regards to sustainability and our use/abuse of creation.”

Jasper Veggie Share is intended to be a small step in the direction of “bringing people closer to the food they eat, to the people who grew it, to the land it was grown on and, hopefully, to greater conversations about equity and justice as it relates to land, food, community interdependence and resilience,” she says.

Kidd draws further inspiration for building community connection through nature and locally-sourced food from grassroots initiatives like Loving Spoonful, based in Kingston, ON, where she once resided. Many Alberta-based community initiatives also share the common belief that everyone needs to eat, and everyone deserves to eat well. In Canmore, the Food Recovery Barn works with restaurants to save food from the landfill by redistributing it to the community at large, farm animals, or people willing to compost at home. In Edmonton, the Food Bank’s Plant, Grow, Share a Row program encourages gardeners to plant an extra row and donate their surplus produce.

The Jasper Veggie Share program invites people to drop off or pick up fresh garden produce on Thursday afternoons, between 2:30 and 5:30 pm, at St. Mary’s and St. George’s Anglican Church on the accessible porch between the church and hall.

The Jasper Food Bank runs out of the church’s lower hall on Thursdays, between 6 and 6:30 pm.

Sigrist, who serves on the board of the food bank which is operated independently by volunteers from the wider community, hopes the community organisations operating in close proximity to one another may offer an additional benefit of convenience to families.

“Recently some of the families accessing the food bank also took home rhubarb from veggie share,” he says.