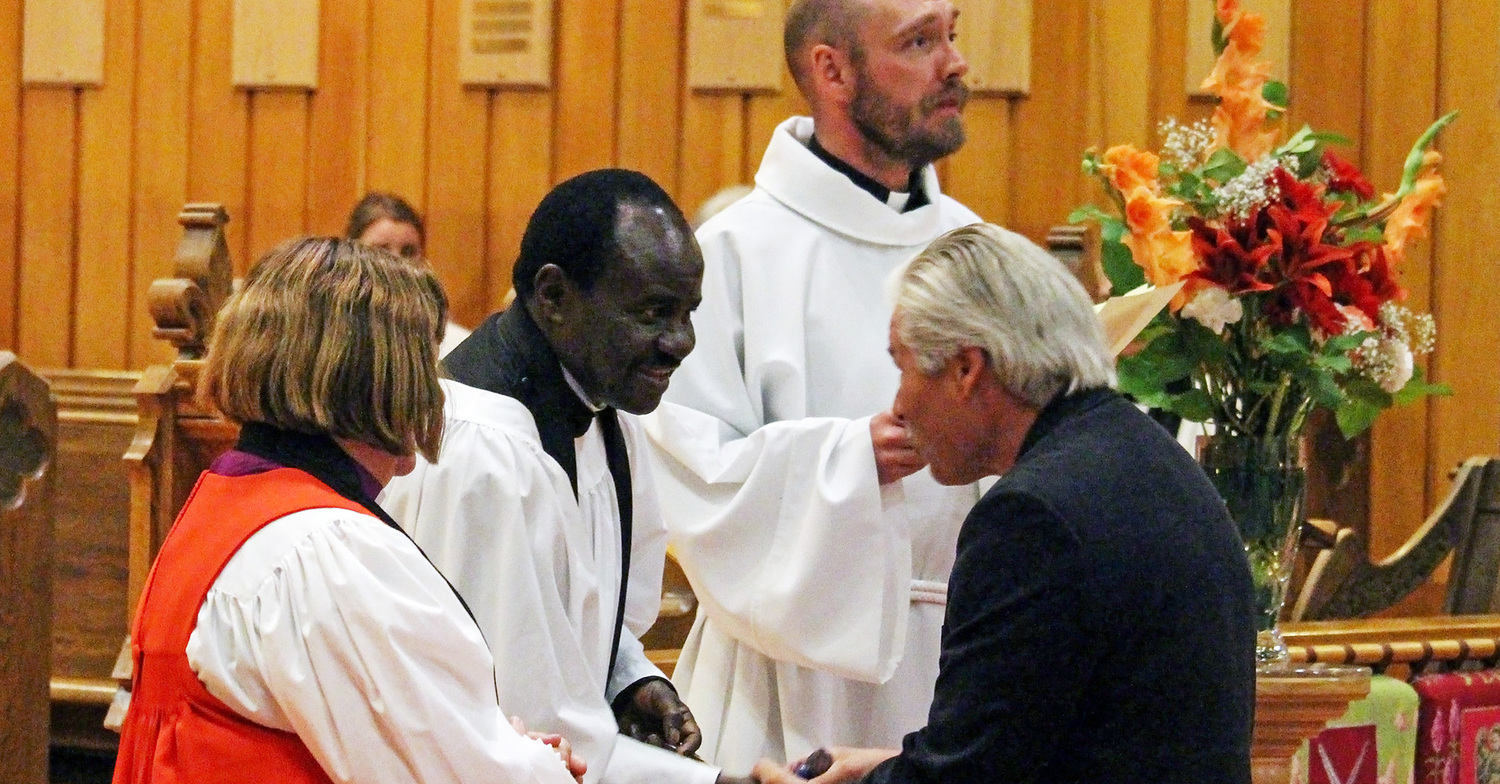 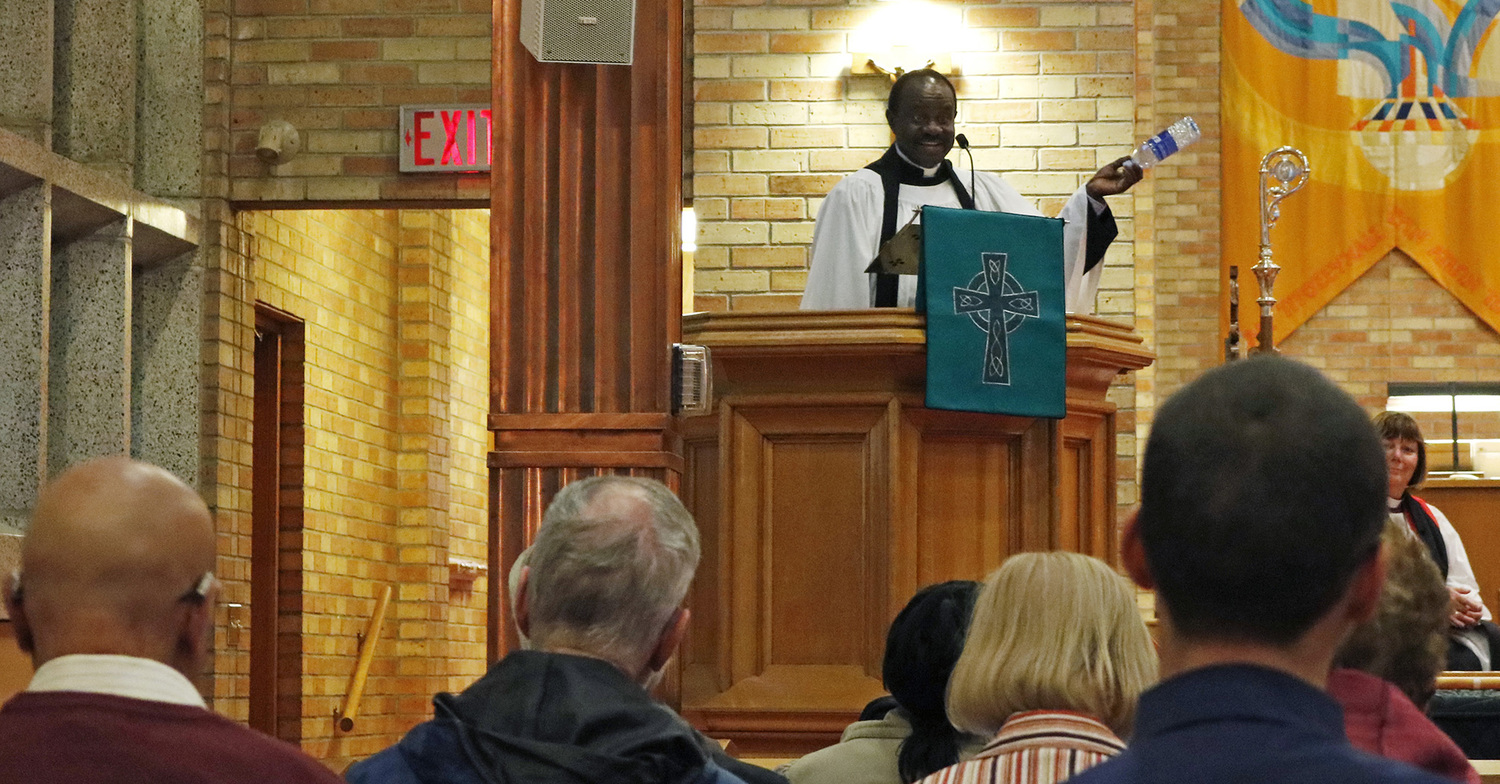 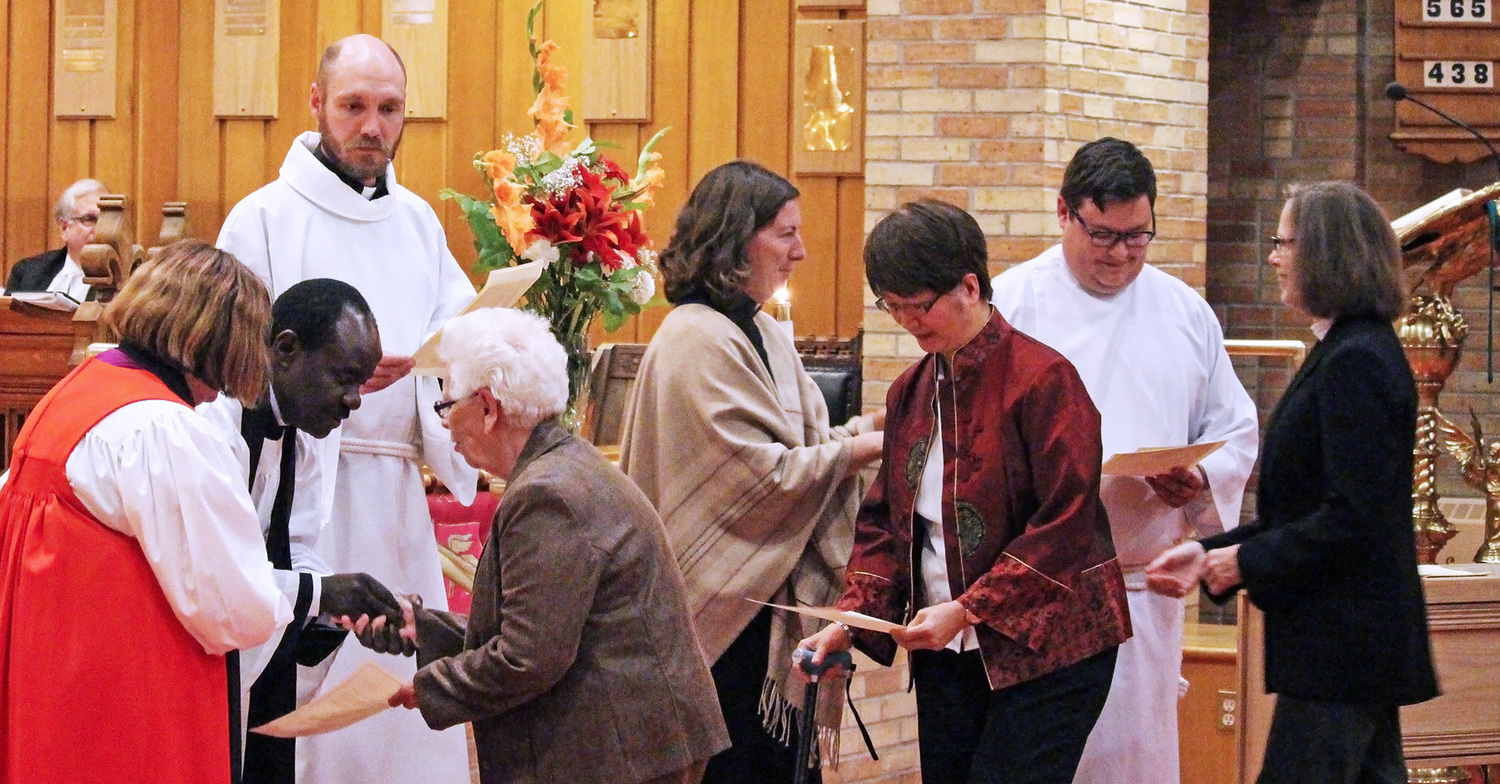 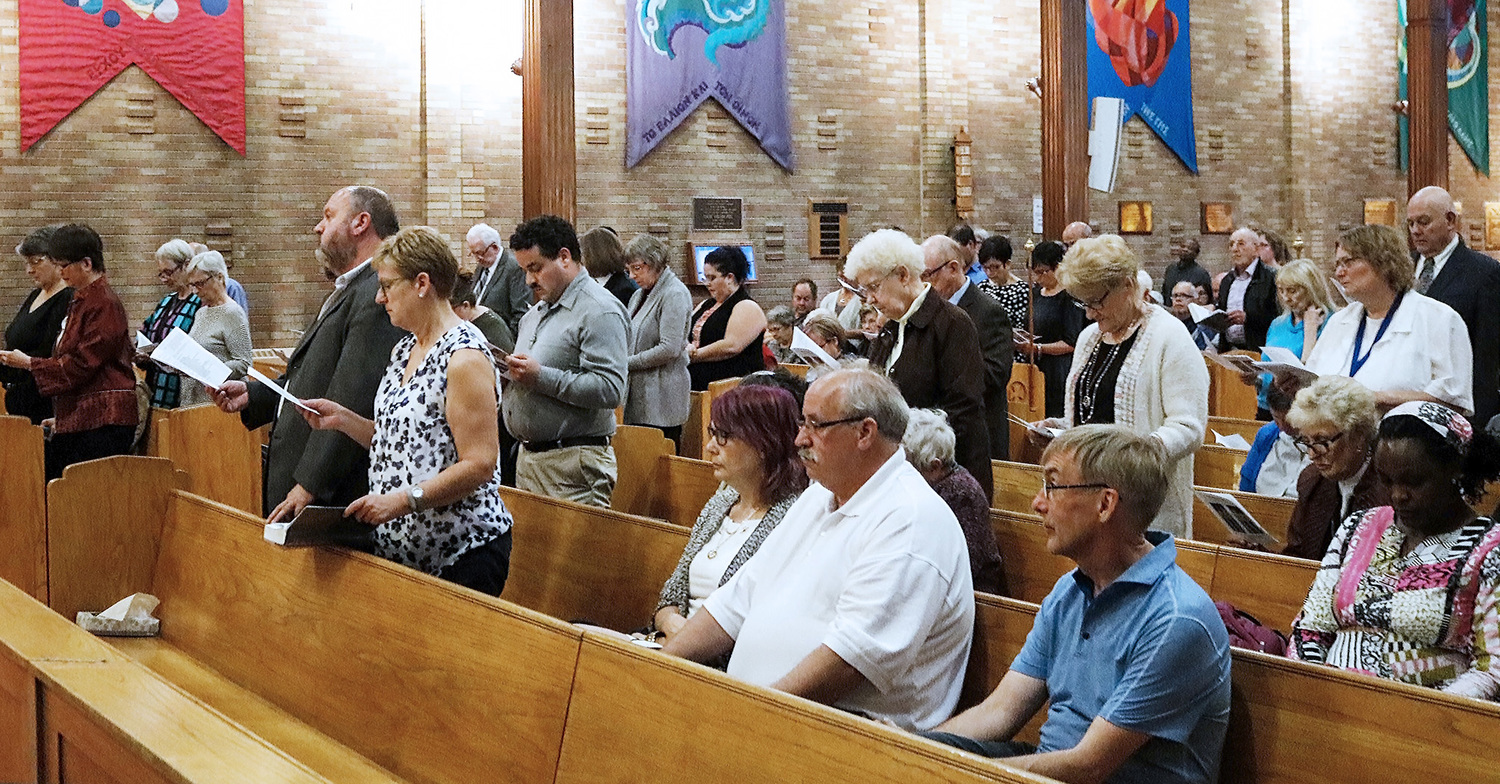 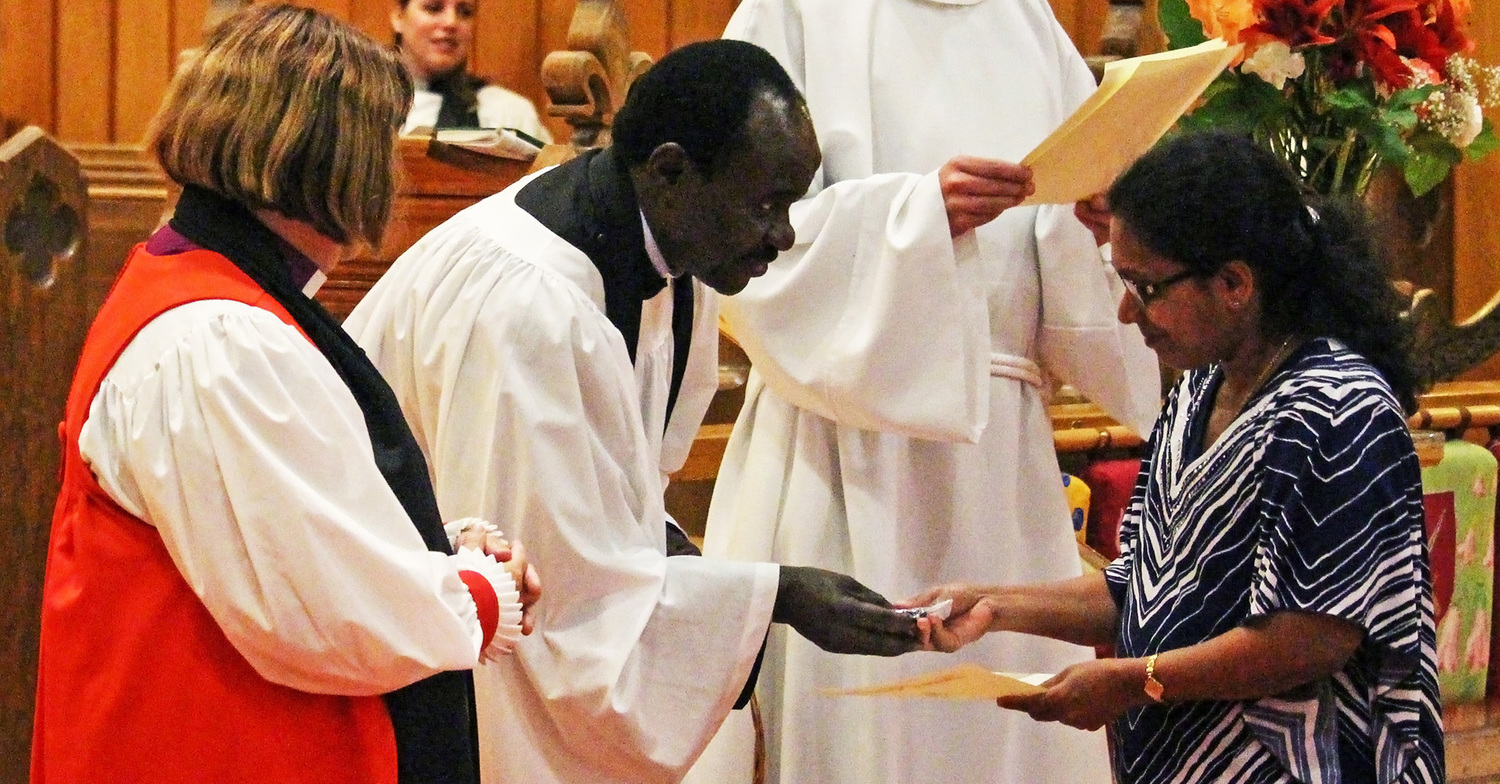 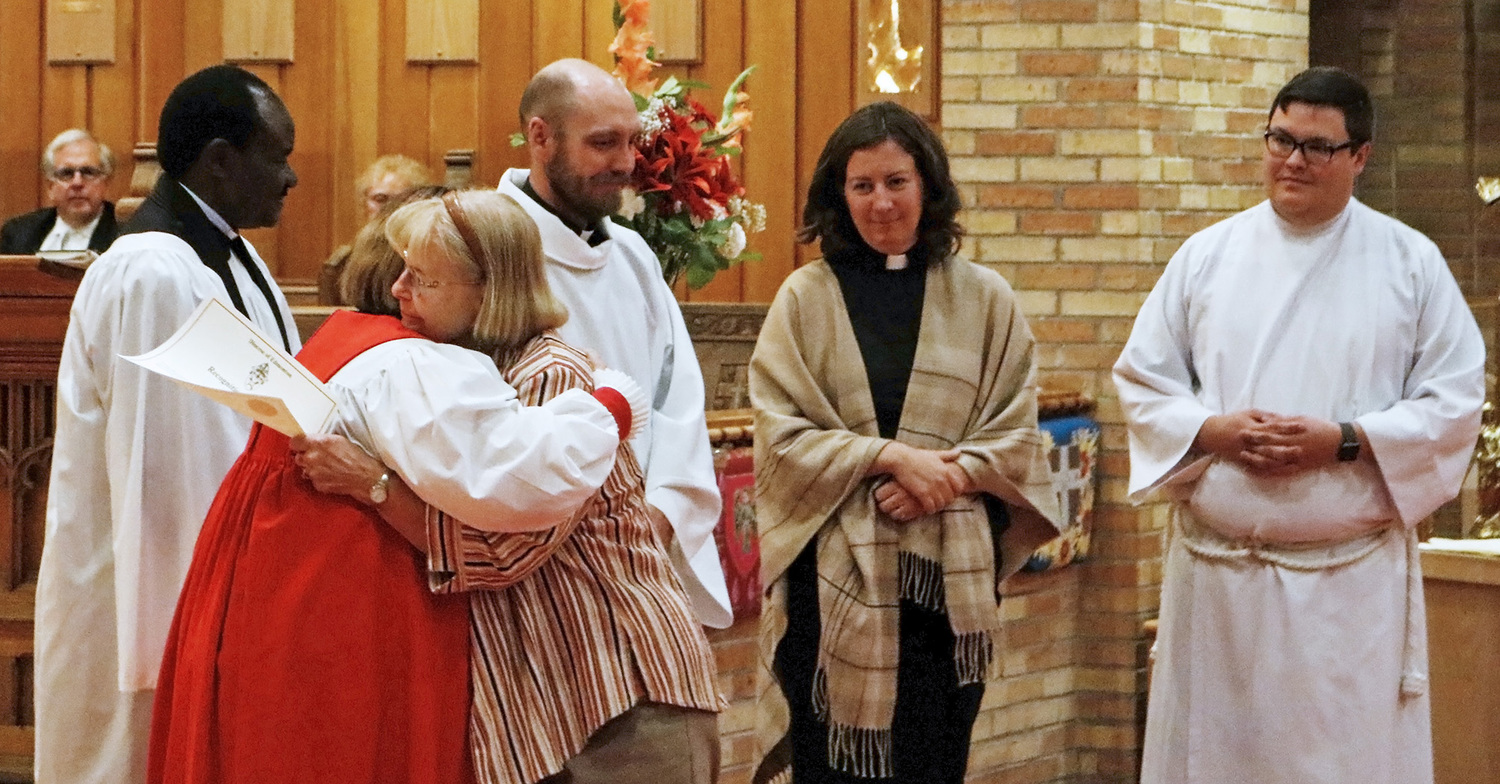 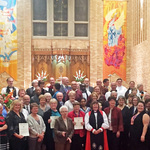 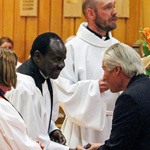 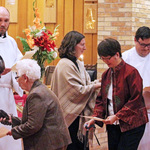 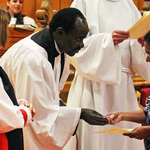 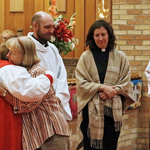 A beautiful service of Evening Prayer recognizing the discipleship of lay leaders from parishes throughout the Edmonton diocese (see attached list) was held Sunday, September 17, 2017 at All Saints’ Cathedral, concluding a joyous and celebratory week that also included the ordination of three priests and seven deacons.

One-by-one, All Saints’ vicar the Rev. Quinn Strikwerda called forth from the congregation more than 60 lay readers and hospital visitors to be commissioned by the Rt. Rev. Jane Alexander, Bishop of Edmonton, who said that to do so was an “absolute delight.” Assisting Bishop Jane with the medallion and certificate presentations were the Rev. Canon Grace Kaiso, general secretary for the Council of Anglican Provinces in Africa (CAPA); the Rev. Alex Meek, coordinator of hospital visitors; and the Rev. Aaron Parsall-Myler, All Saints’ deacon.

Canon Kaiso began his homily address with a message of friendship: “In Africa, in old days, people walked everywhere; no cars, no phones. If you needed to see your friend you had to walk for miles. Hence the saying that ‘The feet are the hoe that ploughs the path of friendship,’” he said.

Canon Kaiso was visiting the Edmonton diocese (his home is in Nairobi, Kenya) as a member of the CAPA delegation which arrived in the Niagara diocese in mid-September and is making visits to several provinces across the Anglican Church of Canada.

“Perhaps, in our times, we could say that cars (and planes) and mobile phones are the hoes that plough the paths of friendship,” he continued. “Three years ago, Bishop Jane reached out in love to CAPA (which coordinates mission for the Anglican Provinces of Africa). As you are aware, Africa has a fair share of problems and challenges, so the Church has a responsibility to give refuge and shelter to those displaced by conflicts of war,” he said describing the Church’s role in supporting peace-building efforts and giving hope to those who live with questions that seem not to have answers. “The support of Edmonton in the area of capacity-building has been invaluable,” he said. “We express our deep appreciation for this opportunity to explore how we can continue to partner in mission.”

“Your sense of mission and commitment to equipping men and women for mission and ministry is also reflected in this service - a real sign of a growing diocese equipping itself to respond to the diverse needs around it… We are living in times where there is growing skepticism about God. What He does or can do and what we ‘Christians’ who follow Him are all about. This skepticism exists not only among the ‘unchurched,’ but also among those within the Church often living with unanswered questions that push us to disillusionment and despair.”

He explained that “the passages we read today (Peter 2:4-10) spoke very clearly into our current situation. Peter, in his first letter, was writing to the Gentiles and Jews who had become exiled Christians.” Cut off from Jerusalem, the City of God, the early Christians were in a state of displacement, estrangement and disillusionment. They were in a crisis of faith. Peter seeks to address the critical questions of: Who are we now? What are we called to do? Where are we going? What does the future hold for us?”

“If the Church today is to overcome its state of disillusionment and estrangement; and regain its relevancy to society to become a transformed community empowered to transform; it needs to be clear about what it is and what it is called to do in Christ,” said Canon Kaiso.

“This starts with men and women who embrace Christ as the cornerstone; men and women who have experienced the forgiveness of God and His life-giving spirit.” Critical to the mission of the Church are a belief that Jesus and His sacrifice are precious and a burning desire to share Christ with others, he said.

“The missionaries that brought the Gospel to Africa illustrate this very clearly and powerfully. Having been consumed by the love of God in Christ they willingly left the comfort of their homes and the security of their jobs and came to Africa; undeterred by the limitations of language and culture; nor the stories of wild animals, savage tribes and tropical diseases; nor the politics of mission agencies.”

“Why is it that 21st century Christians appear disillusioned as if we have nothing to offer to the complex problems facing the human family?"

"Why is it that our participation in God’s mission is usually regarded a task that does not flow naturally out of our indebtedness to God’s love, shown to us every day, and the hope He sets for us in the resurrection of Christ?!"

"Unless we open our lives to Christ and begin to live our lives and serve out of gratitude, then the Church will continue to appear like an army whose supply chain has been cut while in enemy territory.”

Canon Kaiso said he was honoured to be asked to preach and to be involved in the commissioning service. Read all about the rest of the CAPA delegation’s visit to Edmonton Diocese and some of our many creative and outreaching ministries in next week’s Synod Scene. In the meantime, visit our Facebook page to view the pictures.