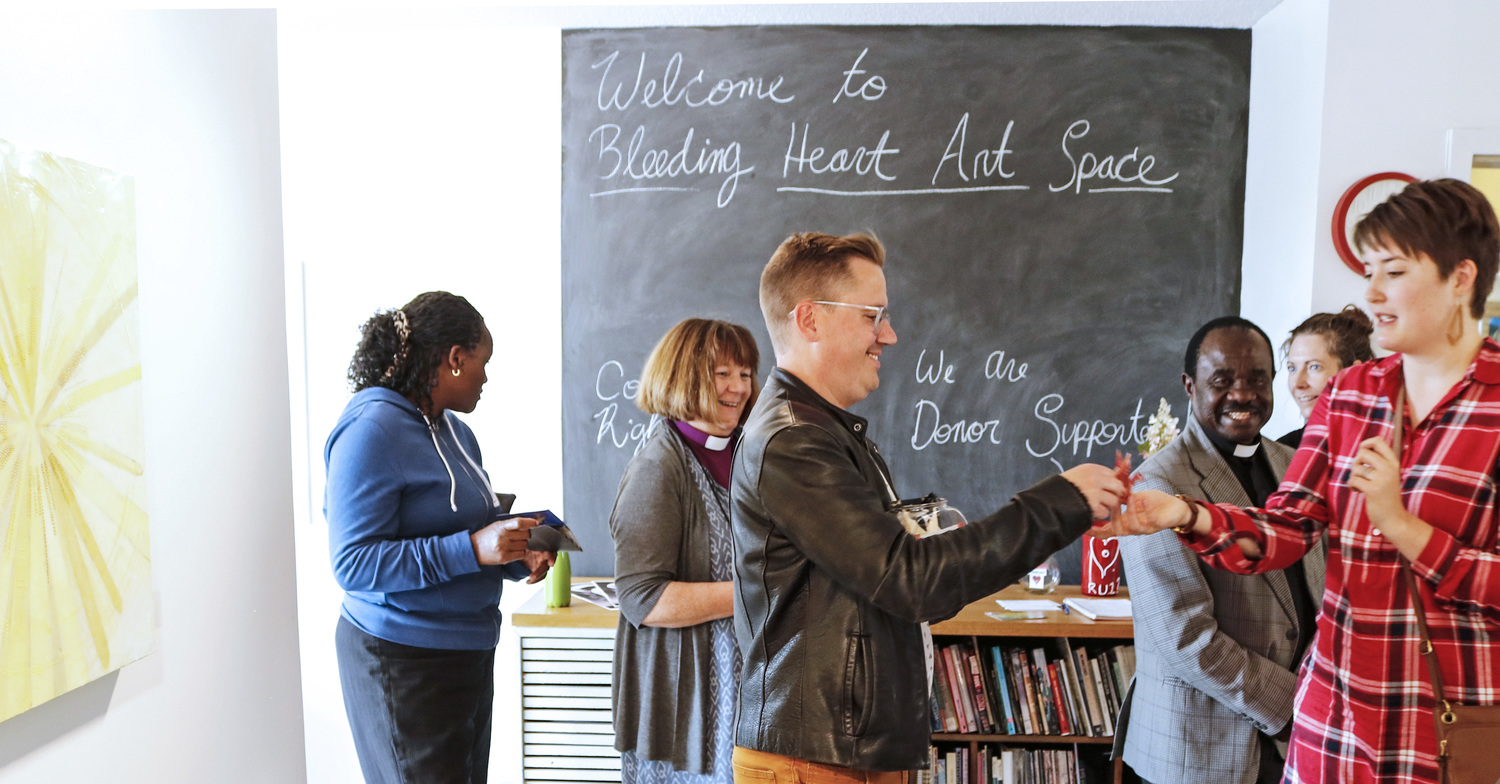 In May, Edmonton faith and arts community-builder Dave Von Bieker announced publicly on the Bleeding Heart blog that, as of June 30, he has resigned from Bleeding Heart Art Space and St. Faith’s Anglican Church where he served as Arts Chaplain.

“Today, I need to rest, recharge and refocus. I’ll be putting more energy into growing my music career and being good to my family. I’ll also be looking for some part-time work that I can disconnect from when I go home,” writes Dave.

“I will step back for at least a year. I may then have the time, capacity and desire to return, but those decisions are for another time and context… There’s a history with me and this Space that I cannot ‘reset’ in any other way than by my departure, so I’m stepping aside. I trust that this will lead Bleeding Heart toward new strength, new ideas, new life, and growth.”

Bleeding Heart grew out of the smaller “I Love Artists” project Dave started in 2009, inspired by his dream to weave together art and faith.

“I had a theory that supporting people’s creativity would give them a natural space to open up spiritually,” says Dave. “This has proven to be true time and again.”

The ArtLuck evenings Dave began hosting in his home about four years ago, which are now held at the Bleeding Heart studio, have yielded several “deeply spiritual experiences.” A theme often emerges during these informal gatherings of creatives invited to share a potluck meal and their work. On one such occasion, by sharing their poems and photo collages, several mothers revealed to one another their struggles with overcoming creative blocks as a result of postpartum depression.

“One of the main gifts of those nights is that you start to see people paying attention to, encouraging and caring for one another,” says Dave. “Often by the end of the evening artists who have been listening to others’ stories have their own breakthrough.”

Founded in 2011, Bleeding Heart has evolved as a faith-centered community arts studio on Alberta Avenue and a ministry of St. Faith’s. The church is located across the avenue from the studio.

“We’ve existed in many forms, from pop-ups to a few different physical locations, with two different church families offering support and oversight. Bleeding Heart Art Space has a past and I believe it has a future,” says Dave.

Adopting a team-led approach, St. Faith’s will continue to oversee the Bleeding Heart ministry under the leadership of the Ven. Travis Enright working in partnership with Bleeding Heart Artistic Director Pam Baergen who has lined up a full slate of exhibits until the spring of 2019. In June, Bleeding Heart held its first Town Hall meeting to gather input and ideas into creating sacred, art and community space.

“As Bleeding Heart Art Space continues, my hope is for those in leadership to feel freed to spread their wings and those ‘waiting in the wings’ to step up and join them,” says Dave.

Behind Dave’s decision to step aside is his belief that in order for Bleeding Heart Art Space “to survive and thrive, it must be a team-led, community-driven, supporter-funded movement disconnected from any one person.”

“Bleeding Heart is a space our city and even our nation needs. I’ve done the research to know how rare the ground is where art and faith dance. This is a vital dream, and I am not the only dreamer,” he says.

Dave’s farewell blog post has been viewed more than 1,000 times and, he has received “heartening” feedback. “It’s been really inspiring to learn of our acceptance from the arts community. Bleeding Heart is very meaningful to a lot of people,” he says.

For the time being, Dave and his family including his wife Christie and their two children plan to continue worshipping at St. Faith’s and support the new Bleeding Heart leadership team as best they can.

“I’ve always had a heart to connect with artists, who are often very real people who don’t hide their brokenness. Building community among creative people will remain a focus for me,” says Dave. “In a year’s time, I hope I can look at Bleeding Heart and see the new life it’s taken on. That will make me really happy,” says Dave.

To learn more about how you can support Bleeding Heart, either by volunteering at the community art studio or by making a financial donation, please visit: https://bleedingheartart.space/

What We Do
Bleeding Heart Ministry