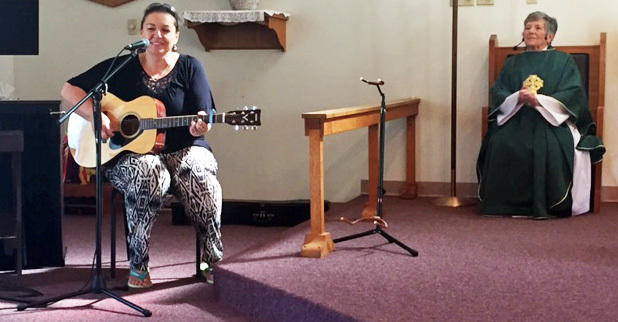 On the 23rd of July, a hot, mid-summer Sunday in rural Onoway, the parish musicians were all away and music was to be sung acapella. This fact alone does not make for an extraordinary situation. But with an interim priest running the show, this Sunday at St. John’s would turn out to be anything but typical.

Saturday evening, I received an email from peoples’ warden Vicki Van Zanten. While waiting for their dinner at the local Burger Baron, Vicki and her husband Norman listened to a little boy seated nearby as he enthusiastically sang along to Christian kids’ songs. As most moms would do, Braxton’s mom Yvonne asked him to turn down the volume so as not to disturb anyone.

Our Vicki, a true disciple, said that they were not bothered by the music, in fact, they were enjoying it. As often happens when we respond to God’s invitation to speak out, this exchange between strangers became a conversation between Braxton’s mom, Vicki and Norman.

The family was passing through Onoway en-route to the annual pilgrimage at Lac. St. Anne. Vicki invited them to church the following morning and they said they would like to come. Yvonne even volunteered to sing if someone would lend her a guitar, as her own instrument had a broken string.

We later learned that Yvonne is an award-winning Gospel singer, who has appeared on 100 Huntley Street to share her miraculous story of healing at a previous Lac St. Anne Pilgrimage. In 2006, she humbly shared with us before offering her first song, she was a cocaine addict. She prayed for relief from her addiction and has been sober ever since. For the members of St. John’s congregation who minister to men in recovery (some of whom regularly attend services) at a nearby addiction treatment centre, Yvonne’s witness was especially powerful.

When Yvonne played guitar and led us in our closing hymn “How Great Thou Art,” we proclaimed the reality of those words in loud, authentic voices.

We are all richer because of Vicki’s desire to speak the Gospel love to a stranger in a small-town restaurant. If she had not initiated conversation, we may have missed an opportunity to revel in God’s presence among us by the Angel sent to raise our Spirits and our voices in worship and witness to God’s love. Thanks be to God! Alleluia!

Story and photo by the Rev. Sheila Hagan-Bloxham, who serves as a member of the Edmonton diocese’s interim ministry team.