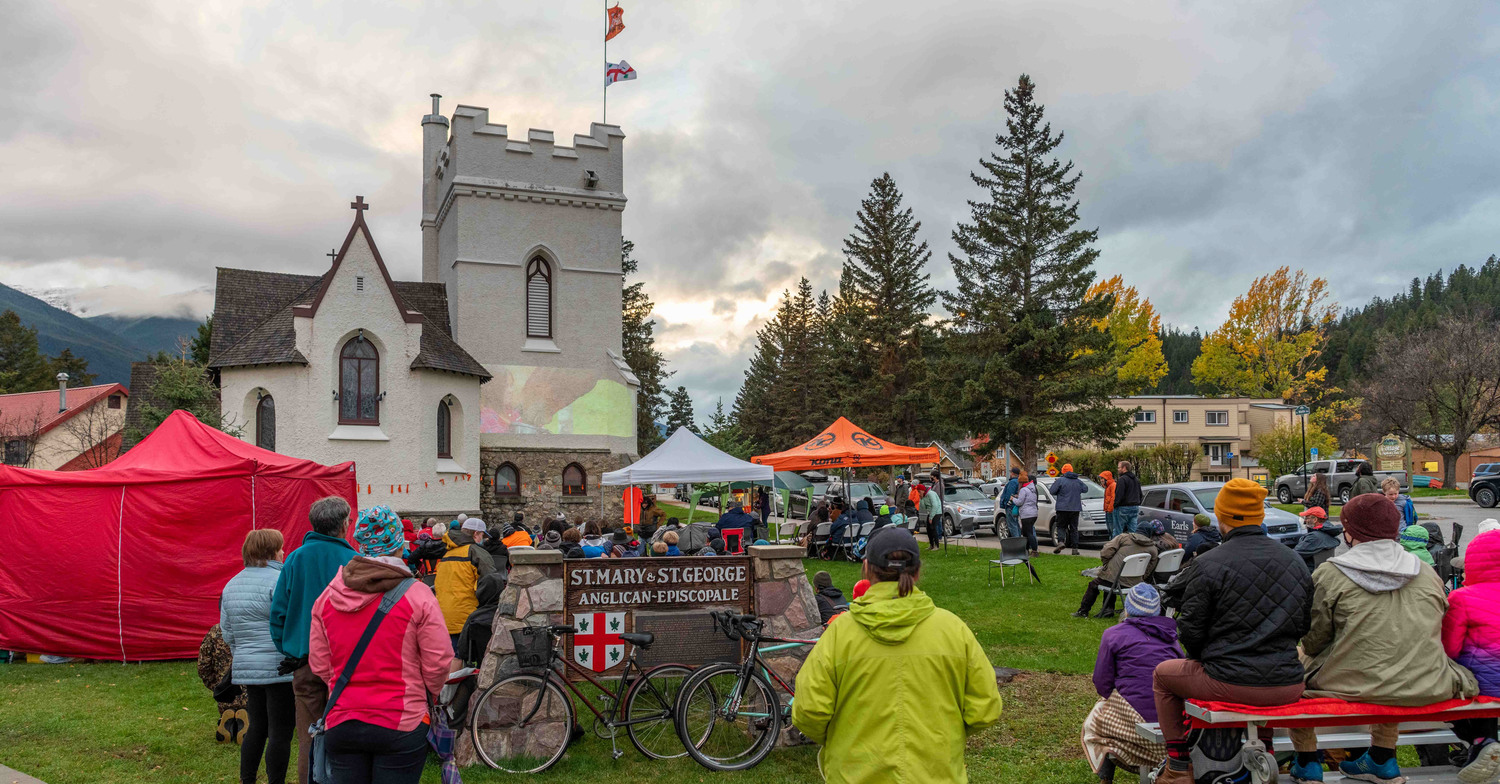 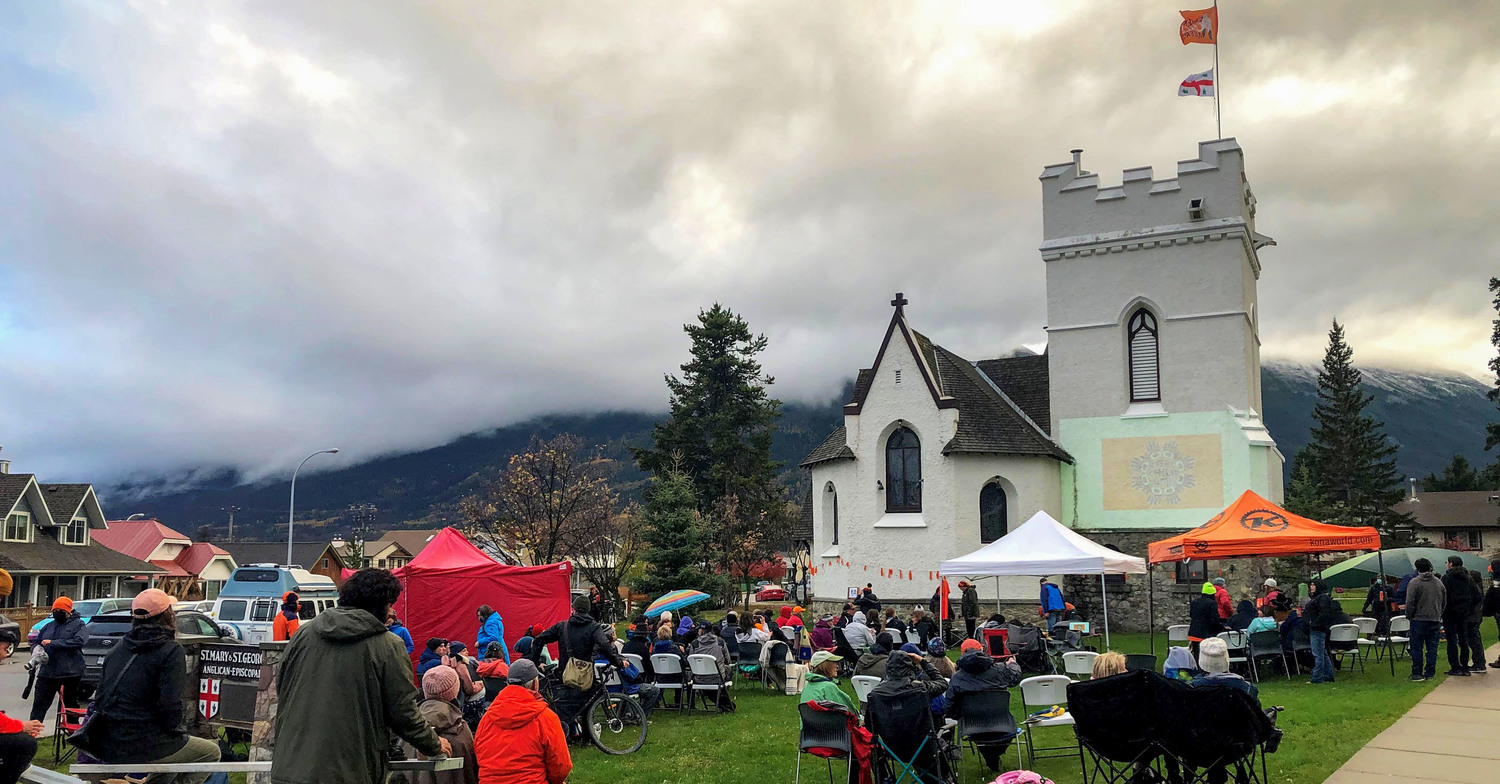 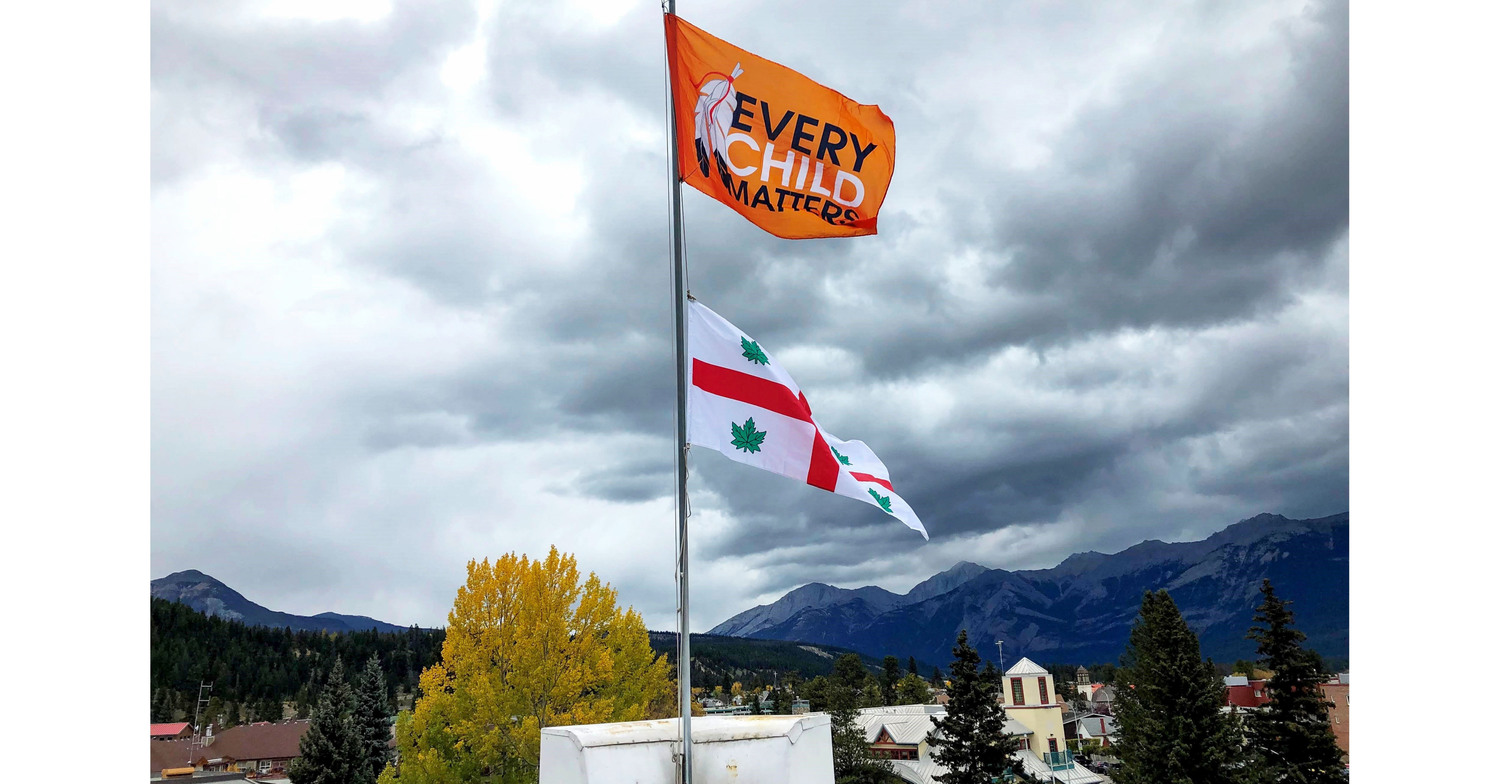 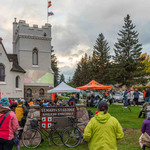 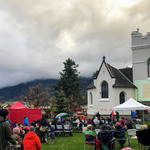 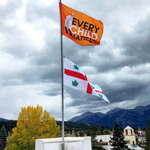 On the National Day for Truth and Reconciliation the whitewashed walls of a church building, with everything those walls represent, became the place to see and listen to the story of the Indigenous families who were forced out of what we know today as Jasper National Park.

“This may have been the most important thing our church has ever done,” said Nancy Addison, people’s warden at St. Mary’s and St. George’s Anglican Church, following a community screening of the Indigenous documentary Resilient: The Aseniwuche Winewak Story.

“My mind was blown by this amazing film with so many local connections,” said Bob Covey, editor and publisher of The Jasper Local and president of the Jasper Film Club. Covey had seen the film when it debuted in Grande Cache on June 21, National Indigenous Peoples Day.

Covey met with Aseniwuche Winewak Nation (AWN) to ask if he could screen the film in Jasper on the National Day for Truth and Reconciliation, as an opportunity for members of the community to learn about the Indigenous history of the area.

“They were really excited,” he says. But showing the film to a large audience in an indoor venue was out of the question due to COVID-19 restrictions. While mountain biking with the Rev. Andreas Sigrist, Covey wondered if a solution might be to project the film on the Edith Cavell Memorial Tower of St. Mary’s and St. George’s church.

Sigrist was both “generous and progressive” in his response. "People have stopped coming to church not because they wanted less, but because they were looking for more. Working for truth and towards reconciliation is that more," he says.

Covey says the AWN also viewed the outdoor, community film-screening as an opportunity to learn and grow together.

“They were our honoured guests,” he says. “We brought them from Grande Cache to Jasper, hosted them in a local hotel, took them out to dinner and drove them to the screening in a vintage 1939 van donated by SunDog Tour Company.”

On the afternoon of September 30, children gathered around the church to watch and celebrate the raising of an orange flag imprinted with the words “Every Child Matters” up the flagpole atop the church tower.

In the evening, although it was overcast and cool, approximately 150 people gathered with warm blankets and lawn chairs on the church lawn. “Right around 6:45 the clouds parted,” says Covey.

While offering opening remarks, an Indigenous community member suggested the screening of Resilient: The Aseniwuche Winewak Story is a land acknowledgment.

“The coming together and collaboration of various stakeholders from the community to make this event happen were simply remarkable,” Sigrist says. “Throughout the evening and in conversations, the significance of relationships and “reconcili-action” really stood out.”

According to Sigrist the meaning and significance of what happened in his community on this first National Day for Truth and Reconciliation are “beautifully captured in the following story shared by an Indigenous Jasperite” (author requested to remain anonymous):

“Bird Woman flew to the top of the tower, a place she was often alone in her true and easy form, as a crow. There she saw two men, carrying large thick ribbons. One of these ribbons looked familiar - she had seen it before in that place. She read its story to be sure: yes, same story, the story that calls many old and some young people to that building on a rhythm she didn’t completely understand but knew to be predictable. The second ribbon was brightly coloured. She recognised feathers drawn onto it, feathers just like her own. She was surprised to see these two men and the colours - for a moment she considered taking the form of a hawk, ready to attack, or of a sparrow, blending in and hiding in non-threatening gentleness, noticed and found beautiful usually only by children and the people who have become so old that they are children again. But she decided to keep her crow form - perhaps she had no more energy to shift or perhaps she found courage to stay; no one but the Creator knows this. Bird woman circled in the sky as a group of small children came, and she was joined in short order, high above, by other crow people, who circled together and watched. They watched as the children sang and howled, like Makoyi the wolf - and they watched as the two ribbons were lifted toward the sky. This was new; these ribbons told a new story, added a new chapter to the old story.  Even the ribbon that told the old story was new and had been healed - it had been tattered and faded - and frankly, she thought, quite ugly - for a long time. As the children danced and played, as the adults worked their busy work with equipment and talk, as day turned to night, as the children left and the adults came, as lights and words and music filled the space, as the night became empty, as the light arrived again, all this time she watched the ribbons fly together. A new story was being told. She didn’t know what the story was yet, but she knew it was good. The next time she was on the tower, alone, she noticed the tobacco and heard its prayers. She would carry the prayers to the Creator. She was alone there in that tower still, in one way of perception, perhaps - but also, for one of the first times she had been there on that tower in her real, easy and free crow form, she was not alone.”

“God is on a mission bringing people together to work towards the day when and where all of creation can flourish,” says Sigrist. “May we have open hearts and minds to discern what the Spirit is doing so that we may faithfully partner with what the divine is doing with, in, and around us.”

You can watch Resilient: The Aseniwuche Winewak Story on YouTube