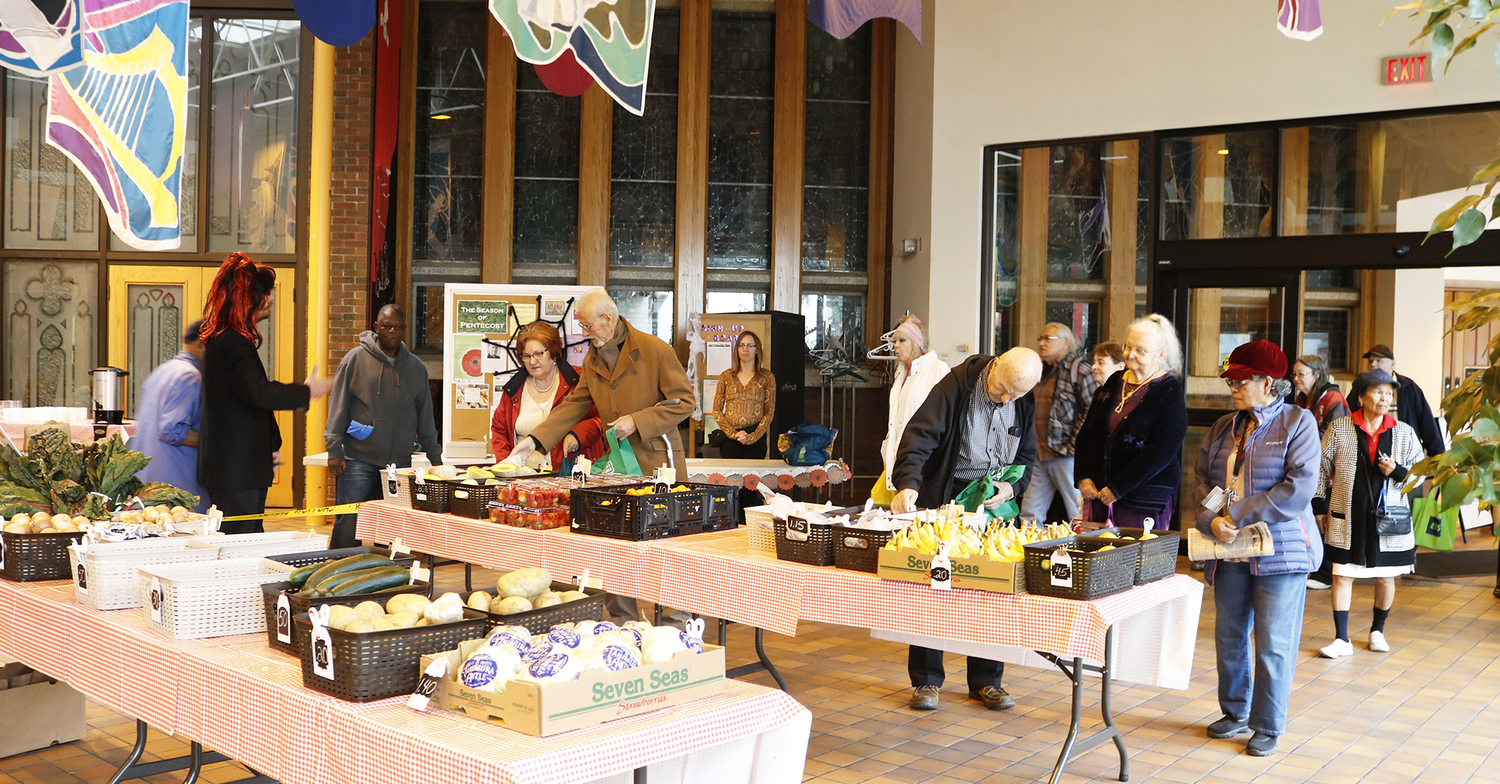 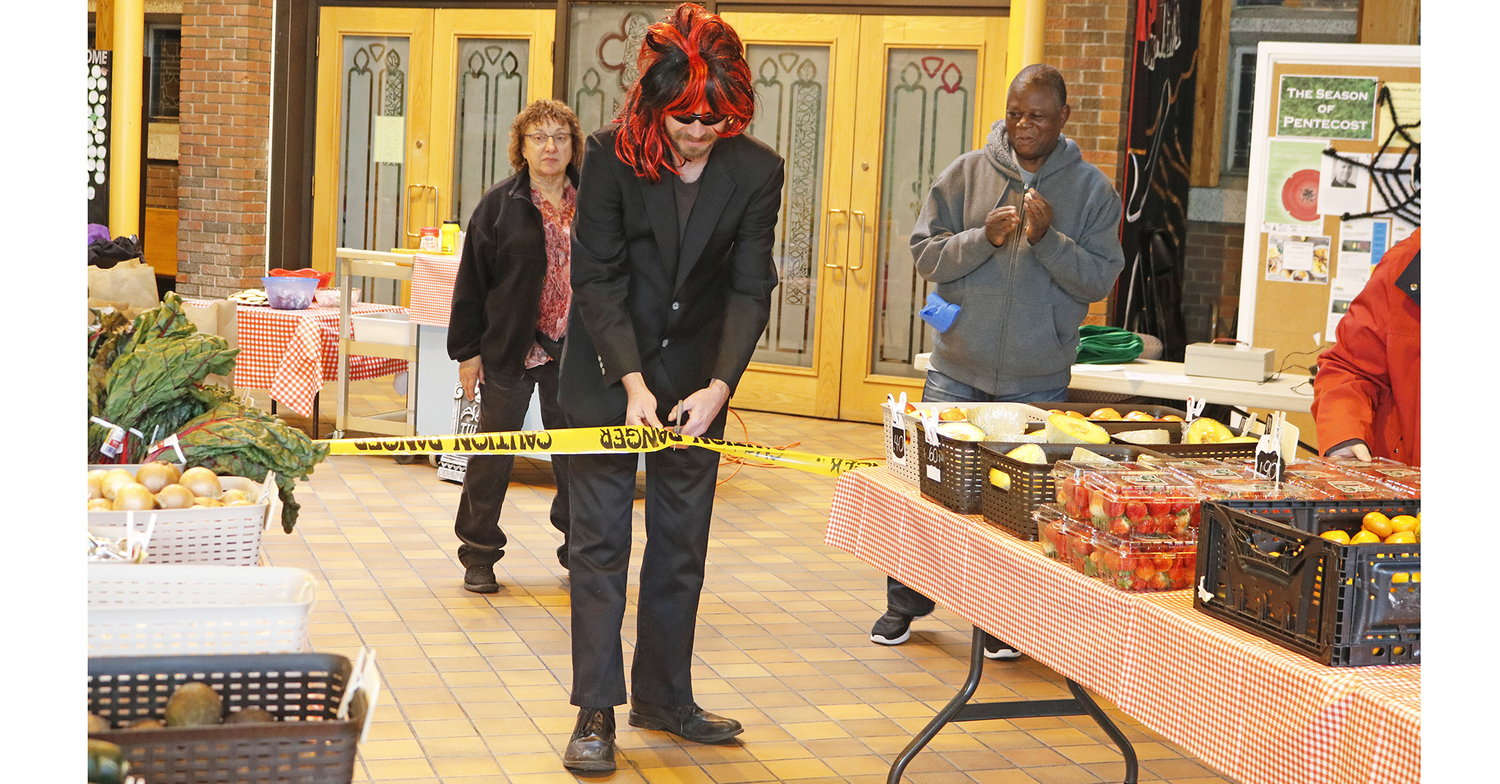 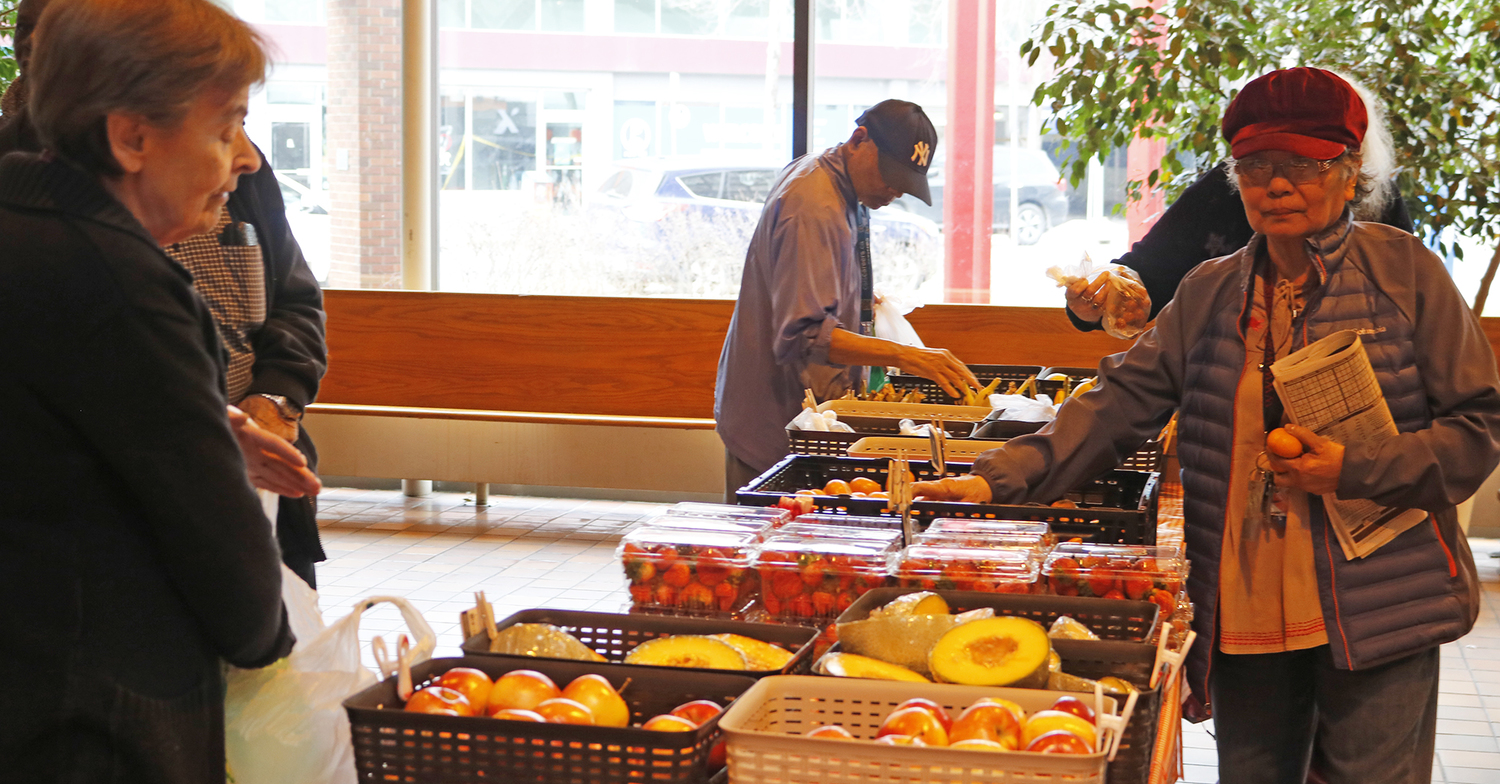 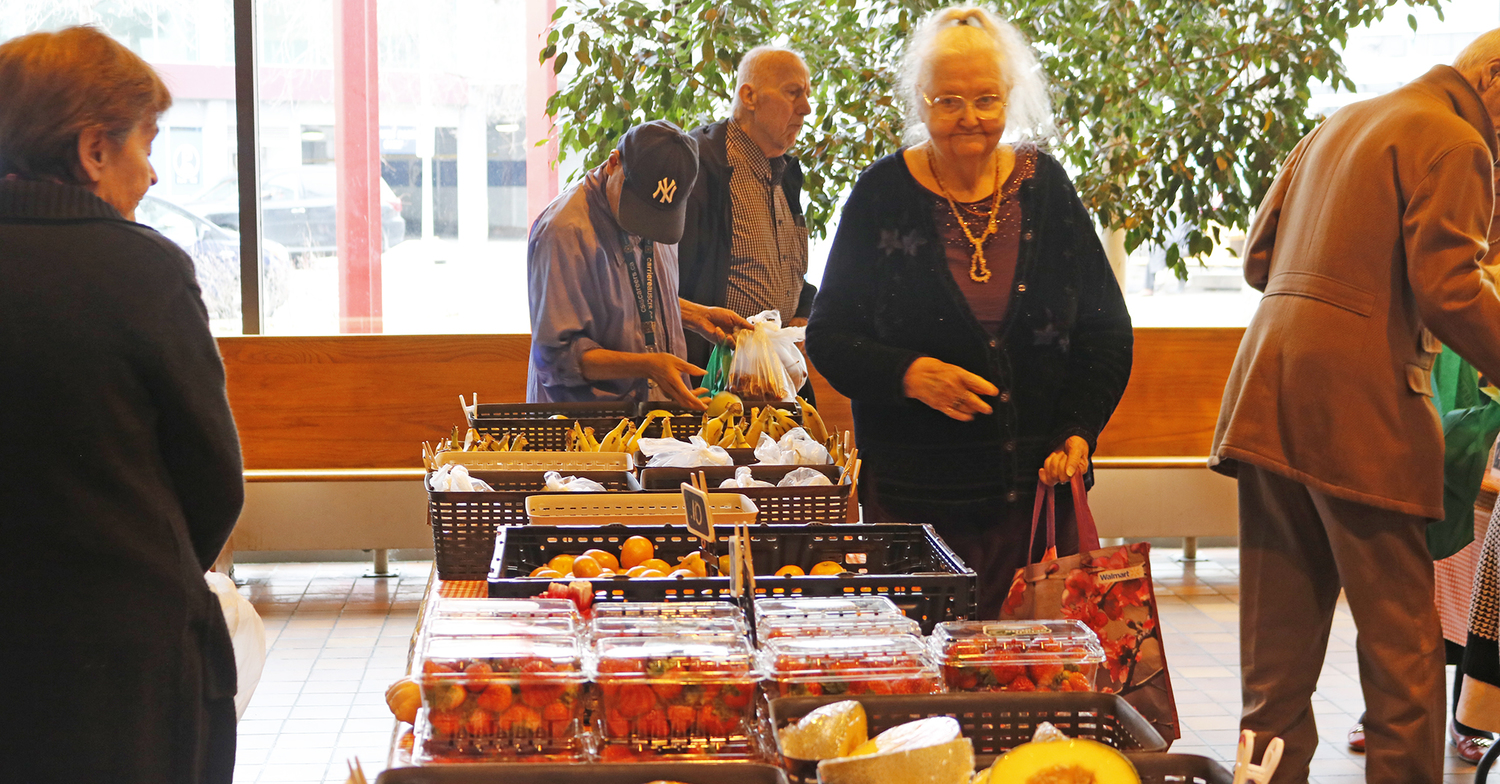 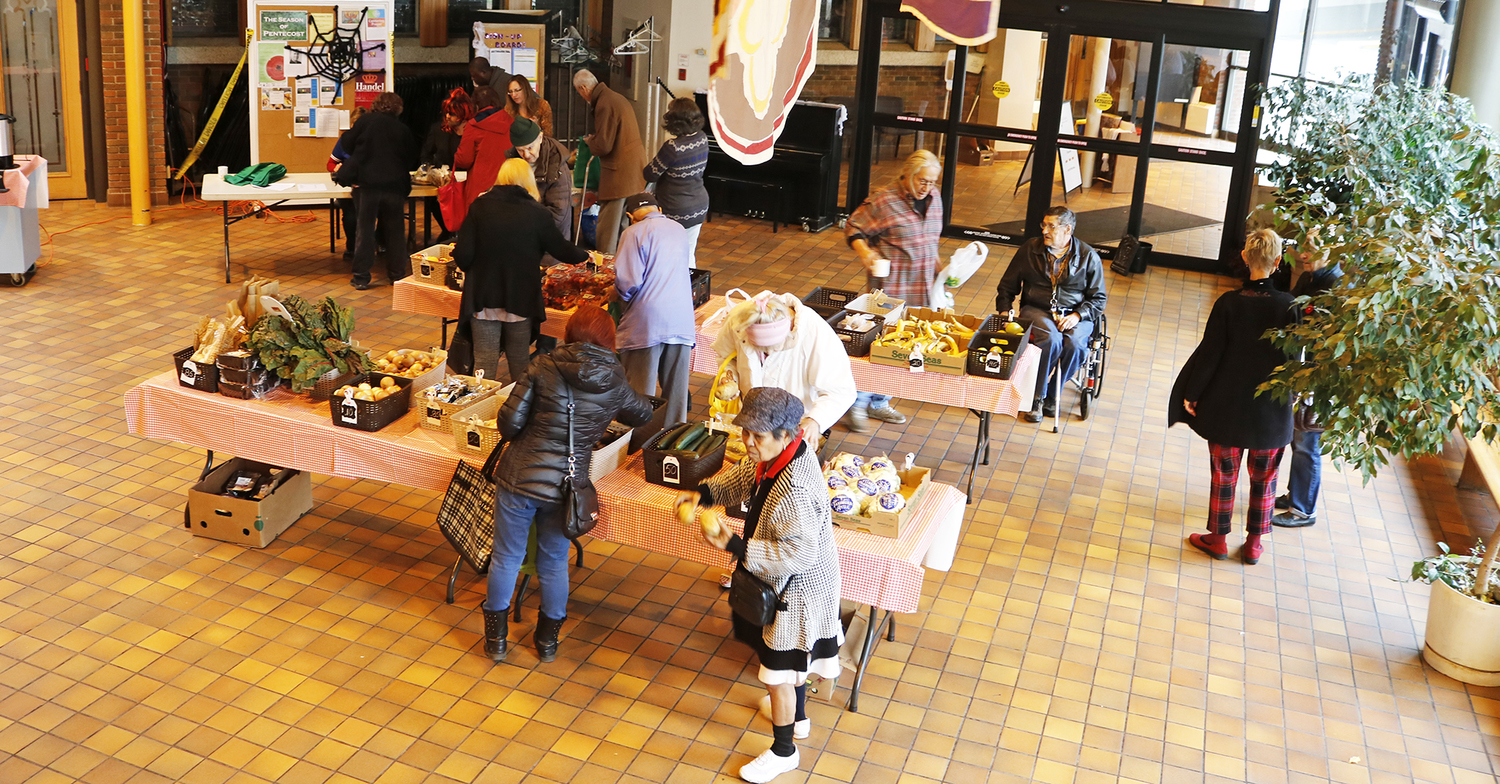 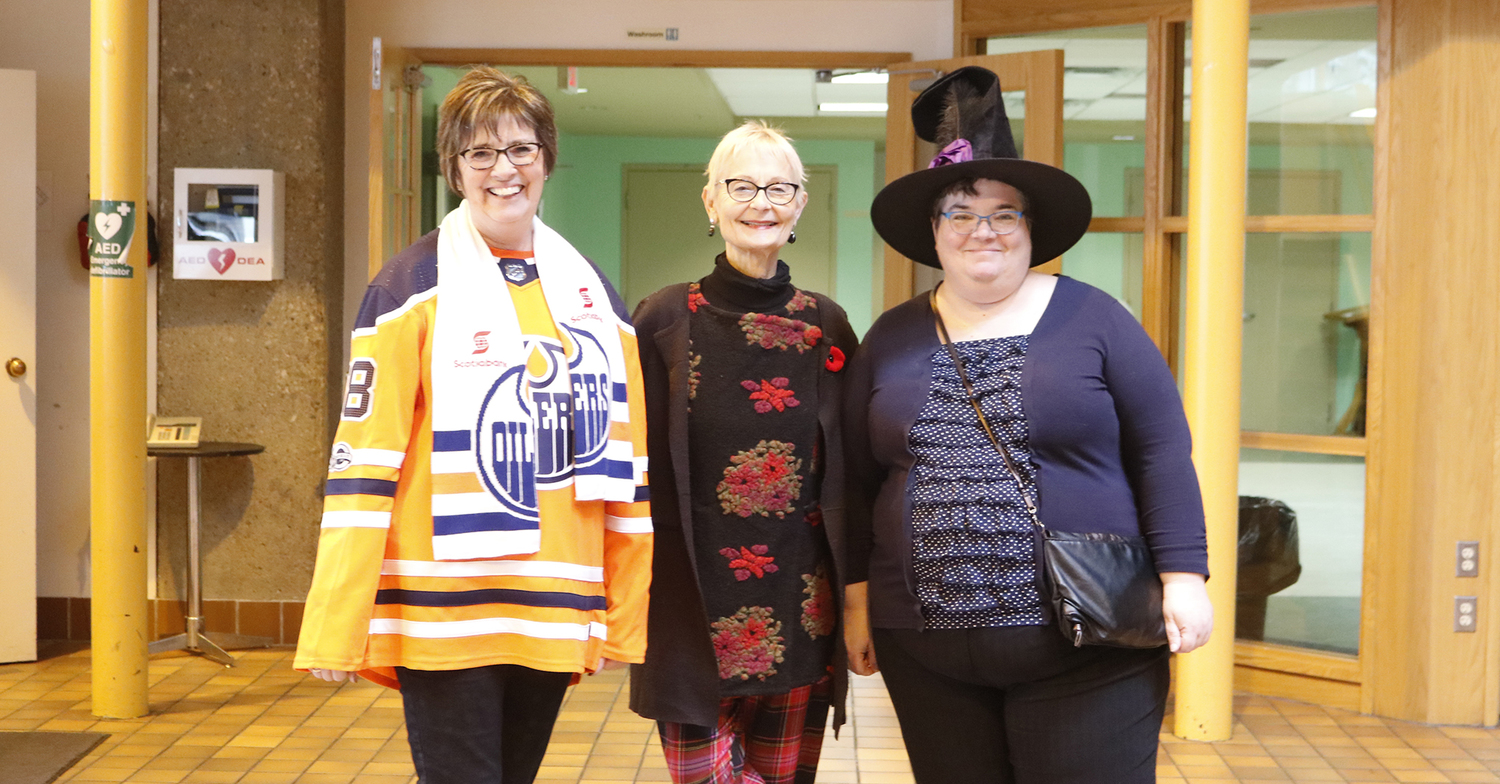 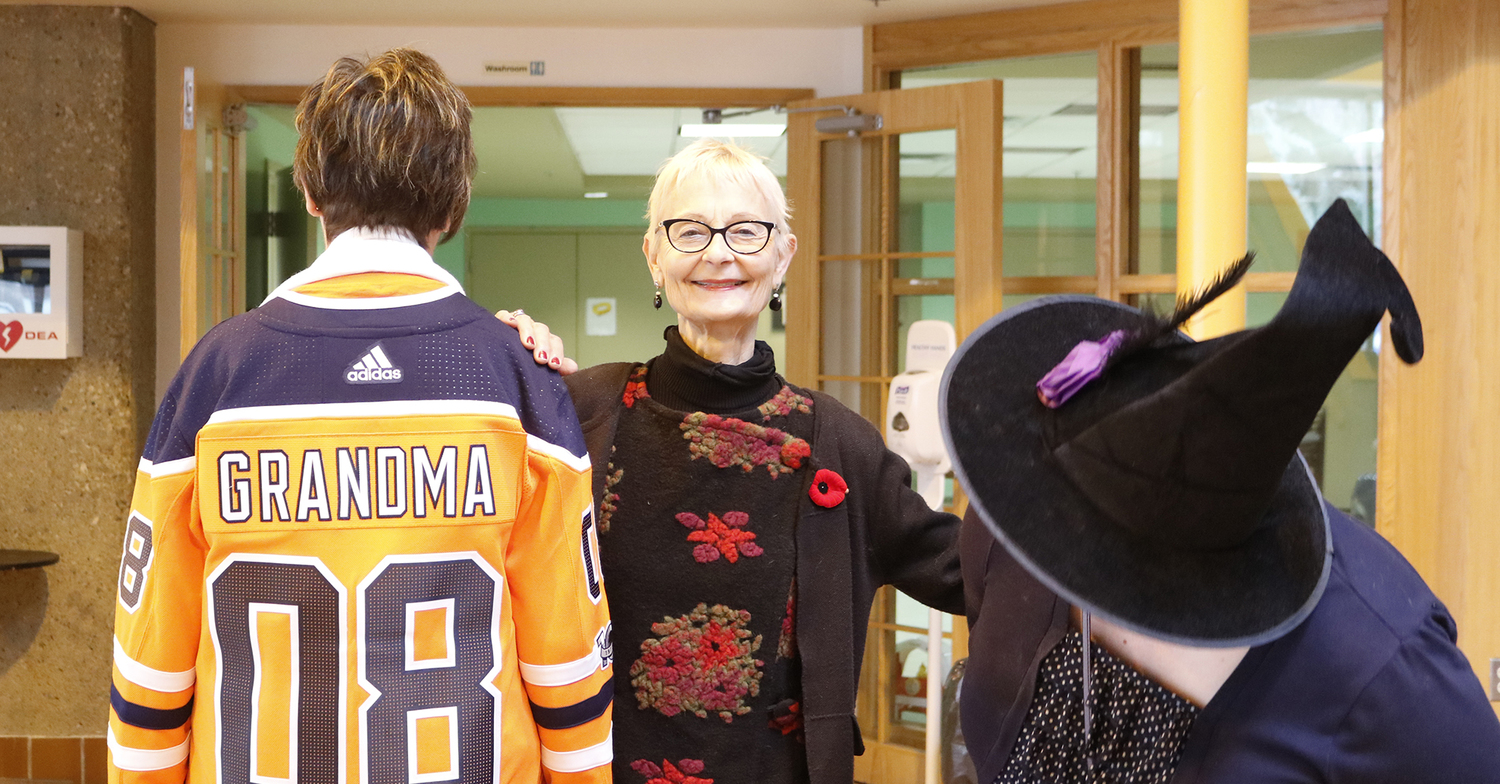 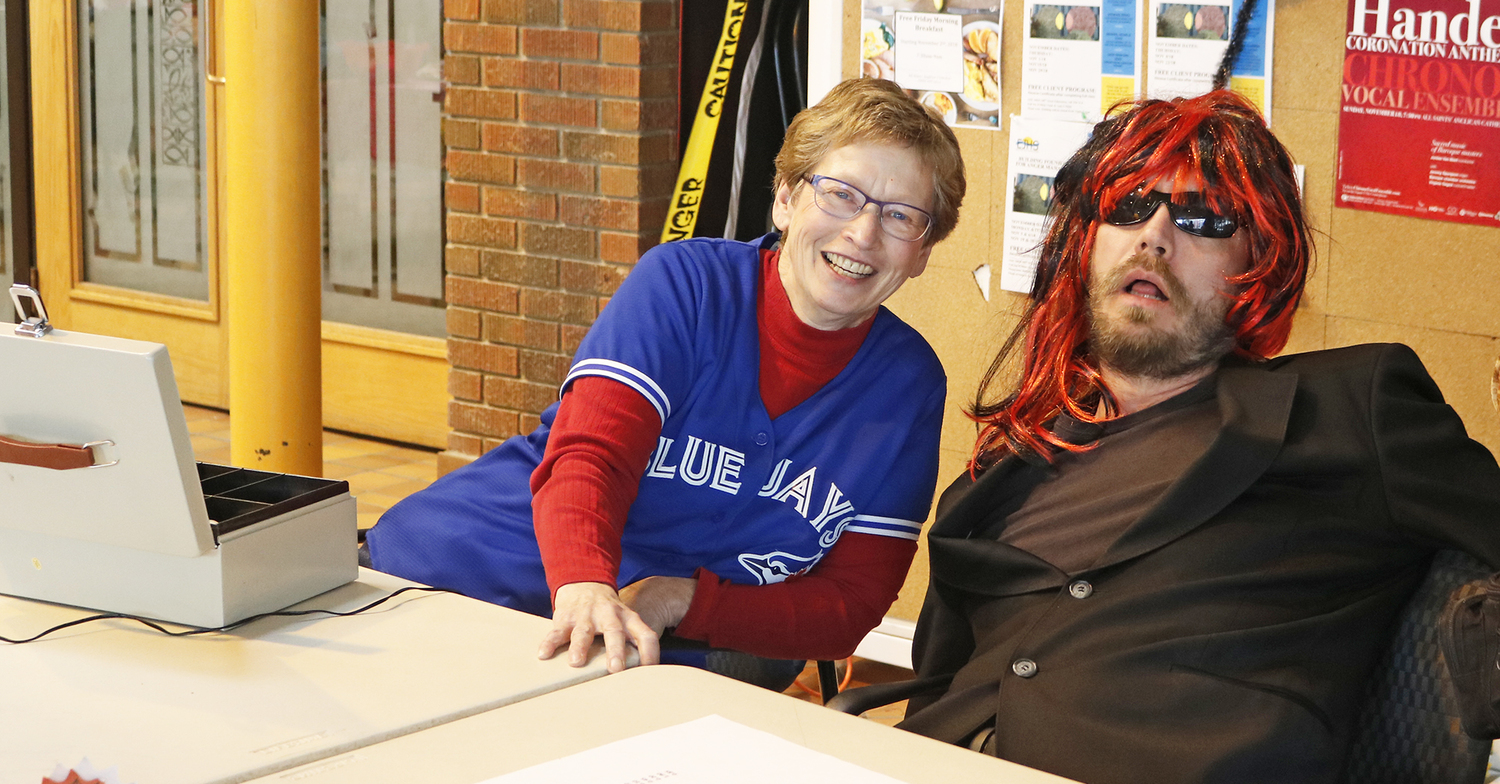 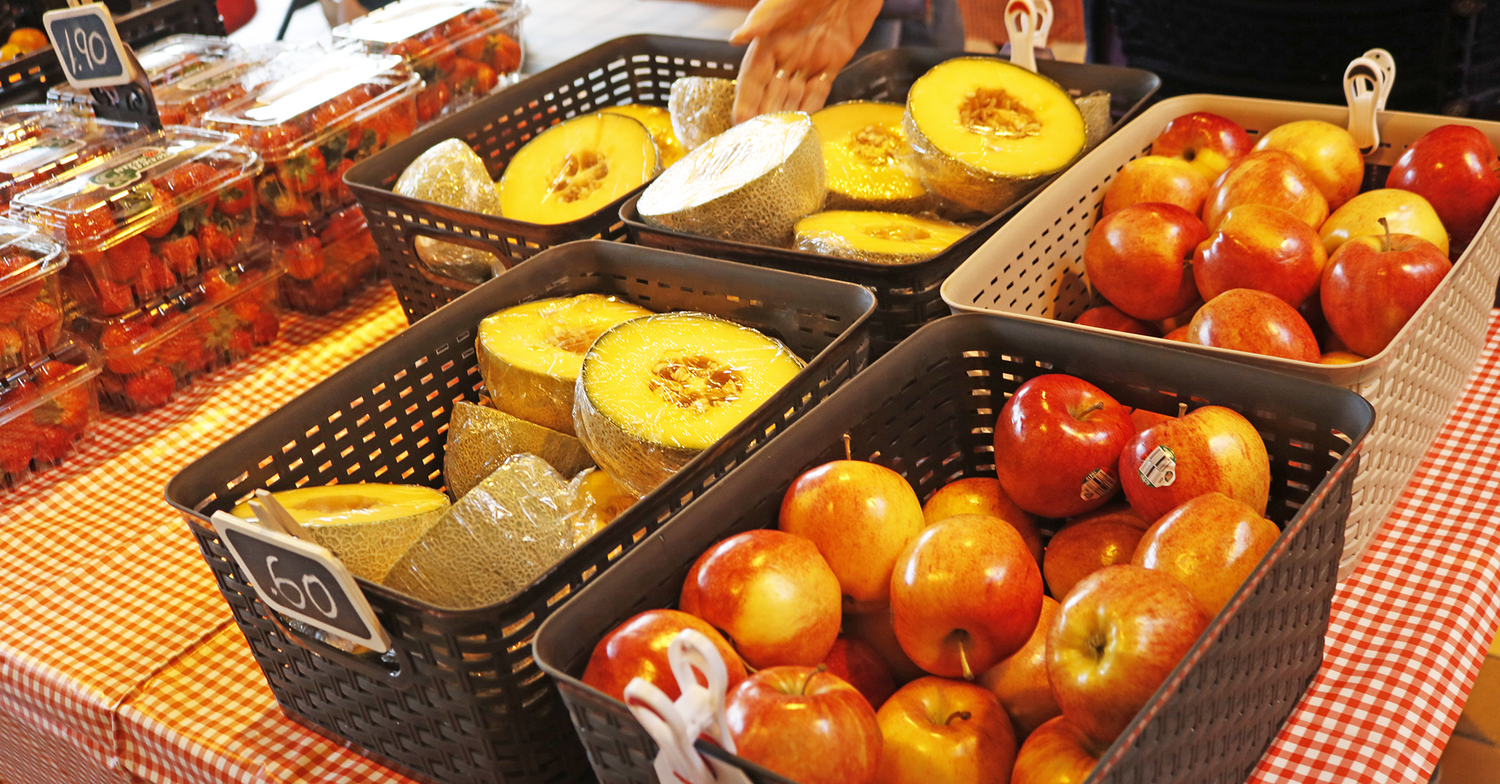 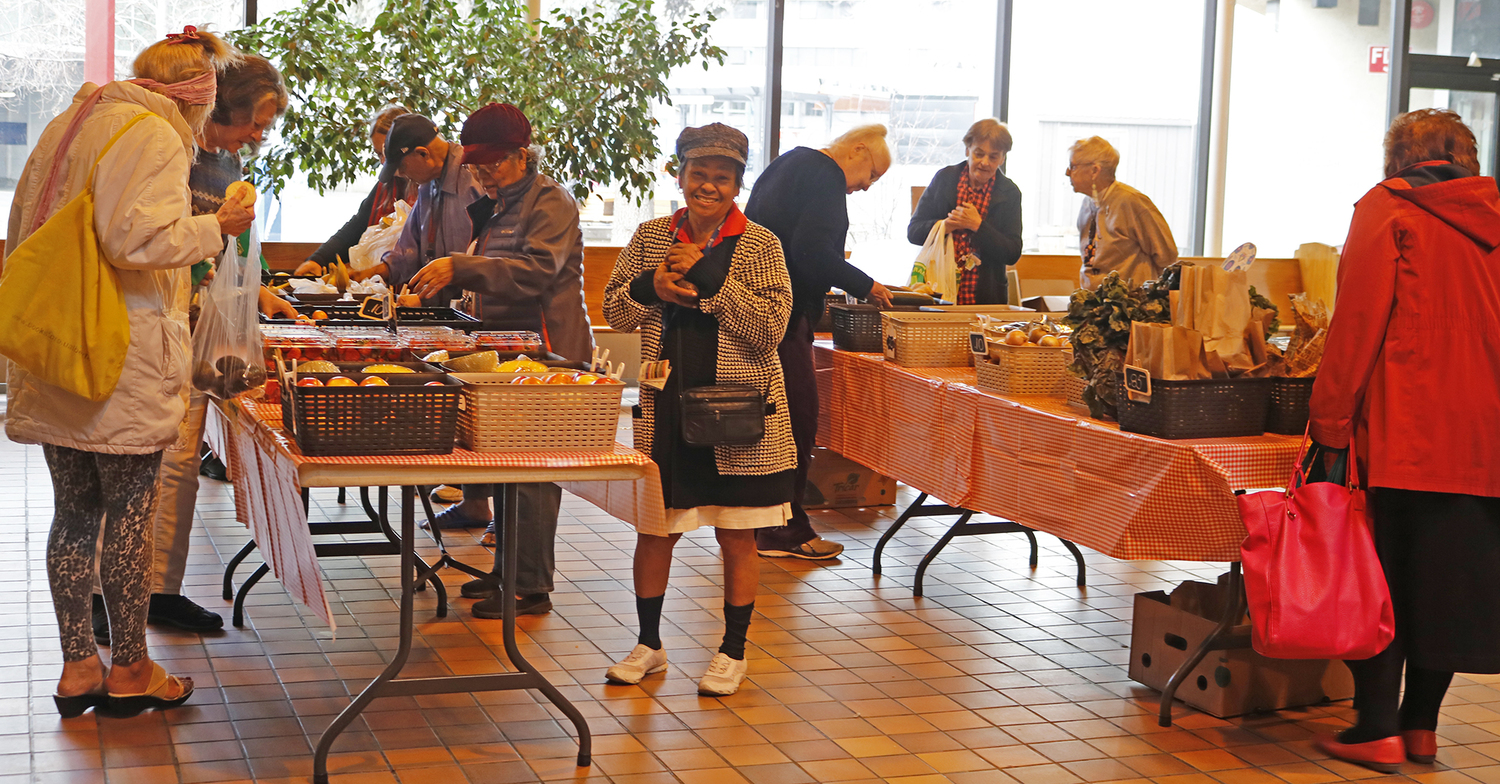 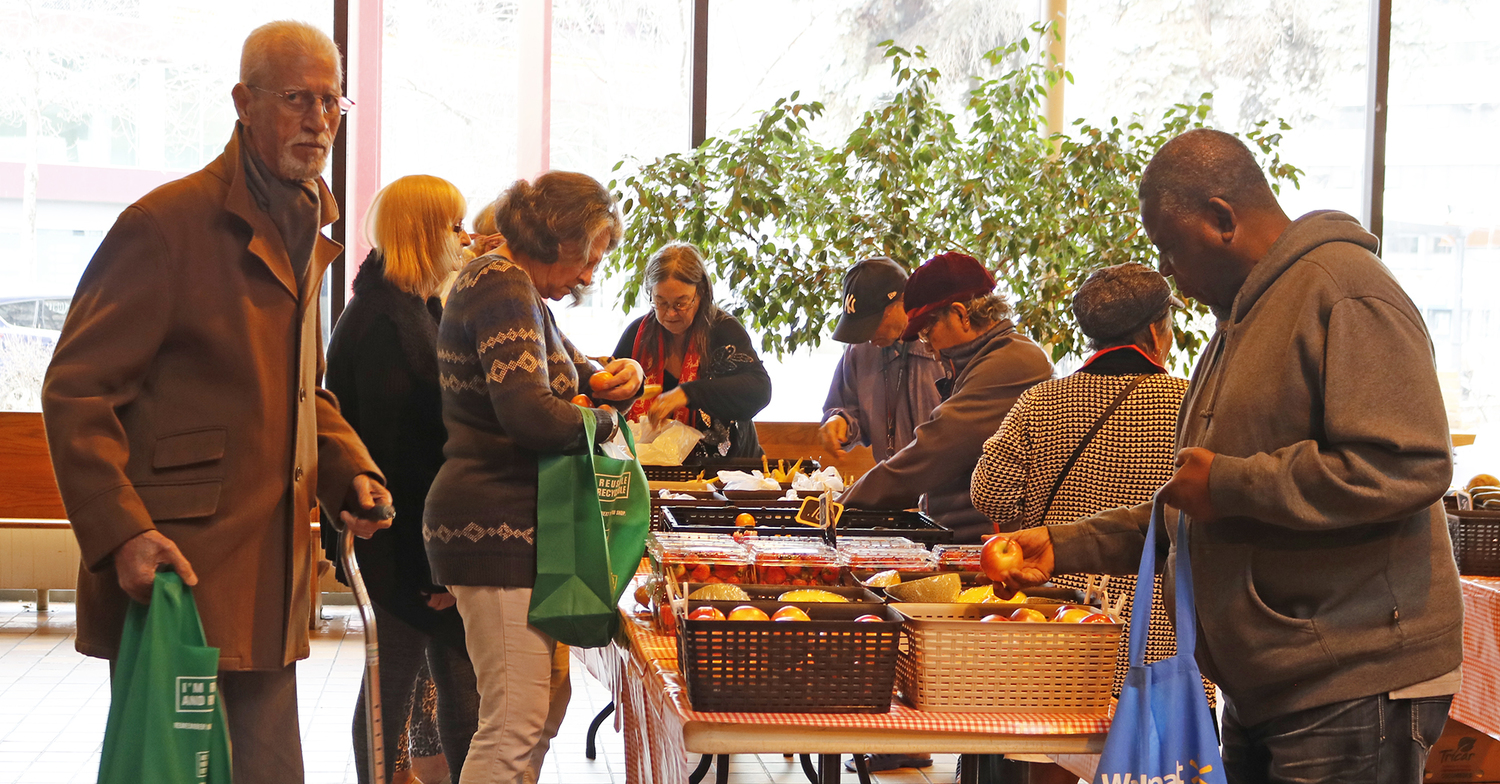 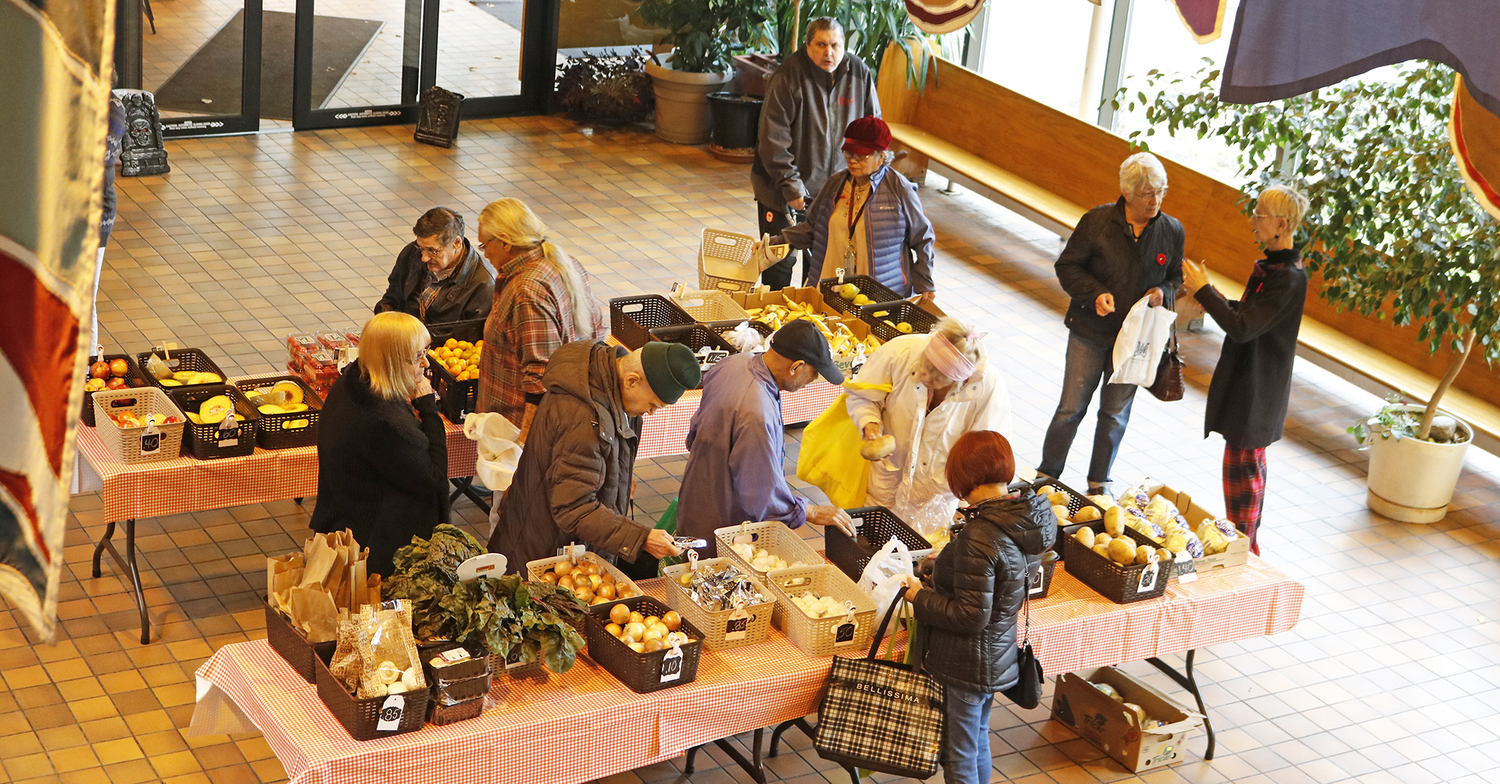 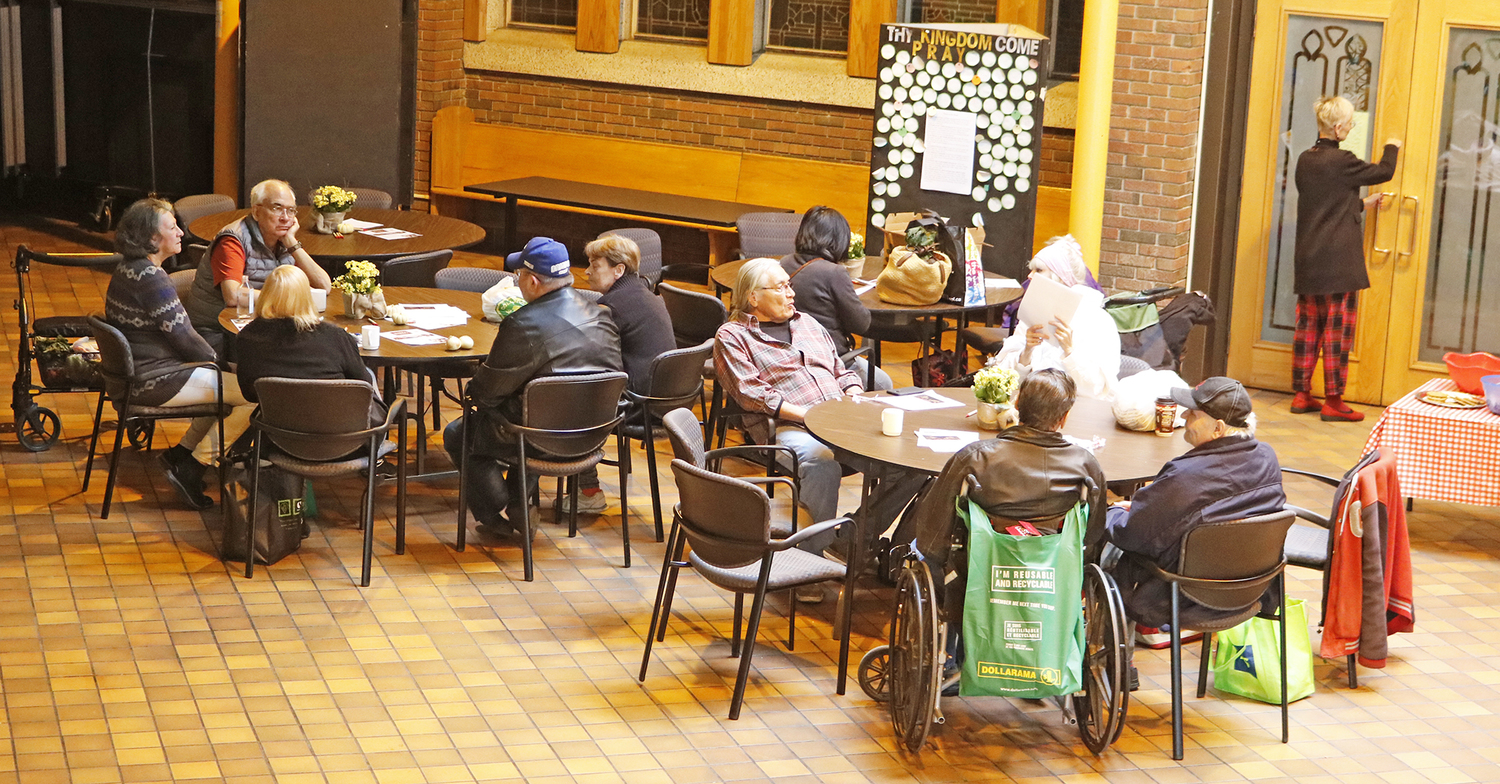 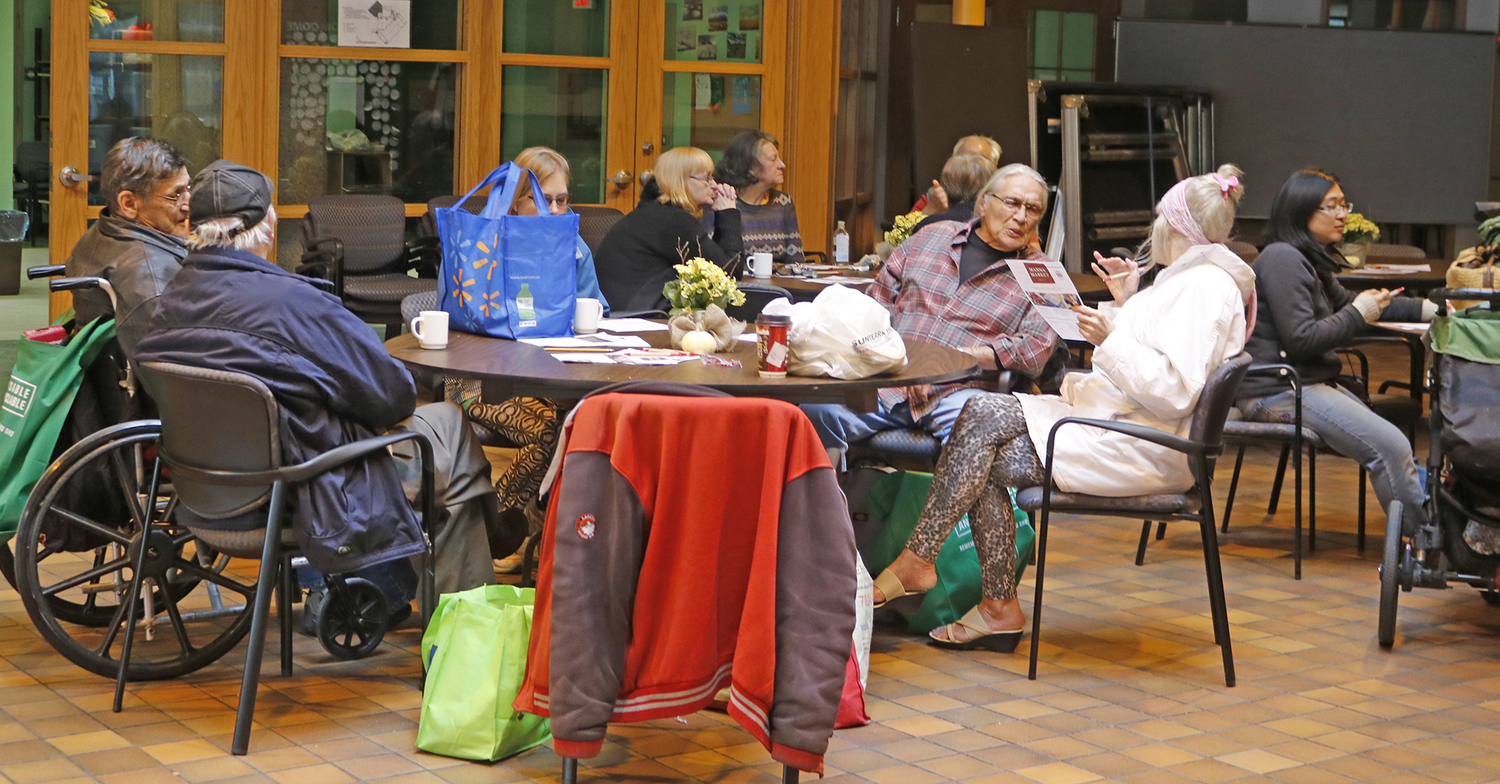 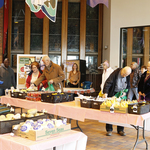 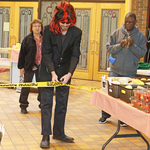 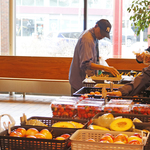 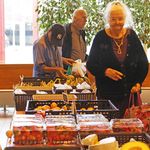 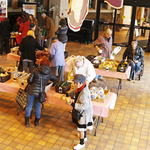 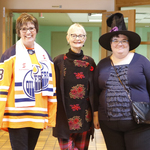 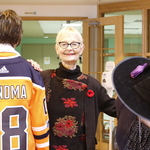 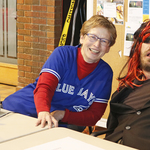 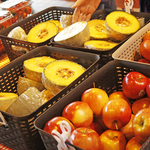 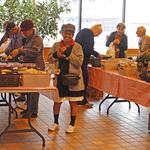 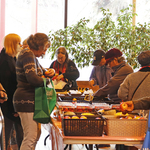 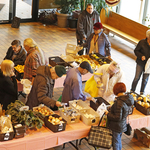 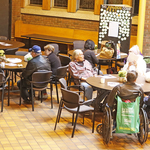 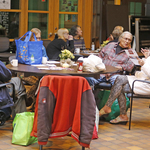 After an initial two-month trial period, All Saints' Cathedral held the Official Grand-Opening of Manna Market on Wednesday, October 31. Rock-star Rod Stewart (a.k.a. the Rev. Quinn Strikwerda) made a special appearance for the Halloween ribbon-cutting, as customers streamed through the door to get first pick at the fresh produce.

Fifty-seventy people have been coming each Wednesday between 2:00 and 5:00pm for the opportunity to purchase fresh fruit and vegetables at extremely low prices. Manna Market buys the food wholesale and sells it at cost, filling a need for greater food security in downtown Edmonton; a need especially felt by seniors and others on low or fixed incomes. Most customers are from the neighbourhood around the cathedral; many from low-income or seniors’ housing, including Cathedral Close, the subsidized apartments that are connected to the cathedral building and run by the Greater Edmonton Foundation. A few people have started coming because of connections with Inner City Pastoral Ministry.

Manna Market Organizer, Doreen Abbott, says a market like this gives people options they otherwise wouldn’t have. “It’s a way to maintain someone’s dignity while helping stretch their food budget,” she says. “Rather than handing them an apple, they get to choose for themselves between and apple and a pear.”

To get the market up and running each week, Abbott works with Rev. Quinn, Vicar of All Saints’, and about eight other regular volunteers from the parish. Plus, a strong connection has been established with an agency called ‘Lives in Transition.’ LIT helps women who are under or unemployed to learn or re-learn skills to get them back in the workforce. Two or three different women come from LIT each week to help mainly with set up: sorting, displaying and pricing the items. A few gardeners in the parish helped out this autumn as well, bringing in their surplus beets, potatoes, leeks and apples.

Manna Market is funded entirely by donations to the REACH campaign, although it hopes to become financially self-sustaining as time goes on. Finances, however, do not determine success. To the All Saints’ team, the market’s success is in the stories they hear from individuals, such as the lady who had raspberries for the first time in years because she couldn’t afford them at the supermarket and never got them at the foodbank. It’s how the same lady opened up to share her childhood memories of picking raspberries, making important personal connections.

Success is also the lady who told volunteers that her doctor had asked her why she’s so healthy. “It’s because of a good healthy meal (another service provided once a week at the cathedral) and being able to buy fresh fruit and veg that I couldn’t before.”

Along with the groceries, the coffee is always on while the market is open, allowing a chance for people to create new friendships. Abbott and Rev. Quinn are grateful for the sense of community that is developing among patrons. Some have come to consider the cathedral their own church and tell others so, even though they don’t come to Sunday services. One woman has expressed interest in coming on Sunday, though she will choose the service with the fewest people.

Manna Market began on the last Wednesday in August. The team had committed to carry on until the end of December, even if things weren’t going well. However, it’s clear that things are going very well and Manna Market is now a permanent fixture at All Saints’. Everyone is welcome to come and shop. Just be prepared to pay in cash and bring your own bag.