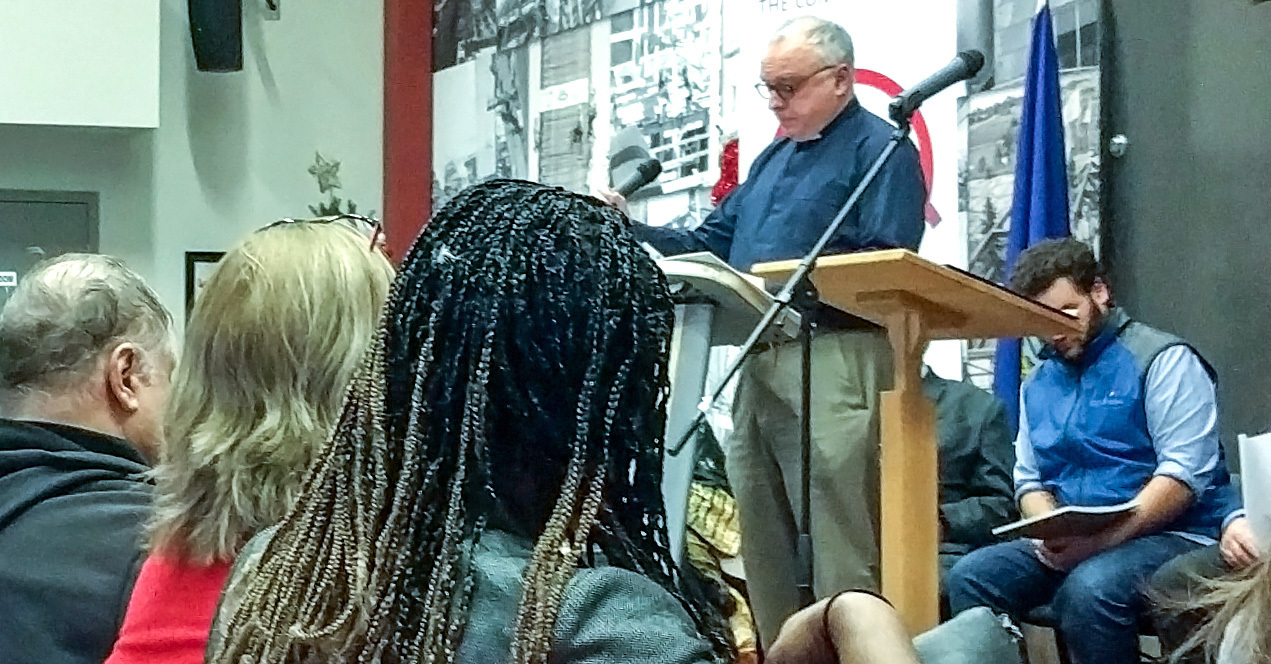 At a Greater Edmonton Alliance (GEA) Action Assembly on December 4, the Rev. John Gee thanked City of Edmonton representatives for their support of a recently adopted policy ensuring all contracted service providers pay a living wage. A living wage, he explained, is the amount of income deemed sufficient to meet a family’s basic needs – not luxuries, but the necessities like food, shelter, clothing, and transportation. Currently the living wage in Edmonton is $16.51 per hour.

Homelessness, poor health, failure in education and crime are all often the end-result of households struggling to earn a livable income, Gee said. “So many problems in our society are caused or compounded by a lack of money – not because we are a poor society overall, but because the wealth is so unevenly distributed.”

“A living wage benefits more people than the workers directly affected. It benefits employers through reduced absenteeism, reduced recruitment and training costs, and improved morale,” said Gee. “It benefits the community as a whole because workers have more time for community activities, they spend more money in the local economy, and they have better education and health outcomes.”

GEA is advocating for a set of policy measures designed to direct public funds to promoting livable incomes, social inclusion, and healthy communities. These measures include:

Edmonton City Council is expected to pass a social procurement policy this week. Councillor Mike Nickel, representing Mayor Don Iveson at the assembly, responded positively to GEA’s request for the City to change its tendering process as did Councillor Ben Henderson who expressed his support for the agenda.

Among the 85 people representing GEA’s 20 member organizations at the assembly, held in the Ironworkers’ union hall, were the Rev. Jonathan Crane and his children. The Crane family held up signs for the Diocese of Edmonton and St. Augustine’s of Canterbury Anglican Church.

Leaders of GEA - a coalition of faith, labour and community organisations dedicated to building leadership capacity amongst everyday citizens to advance the common good - are meeting this week at the synod office to discuss next steps. Photo: Jonathan Crane