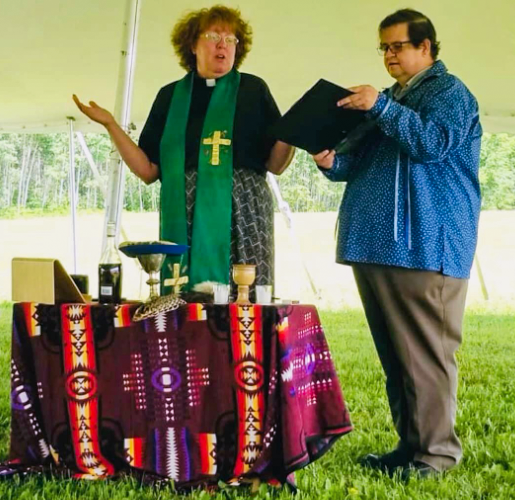 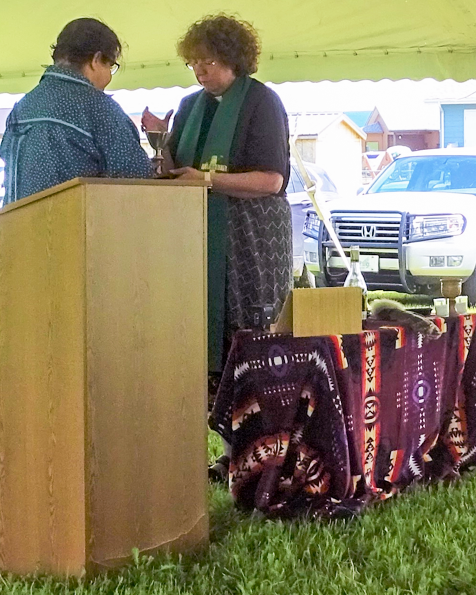 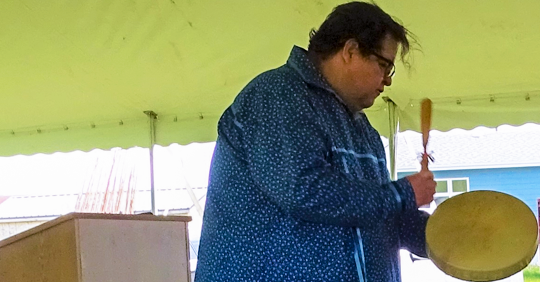 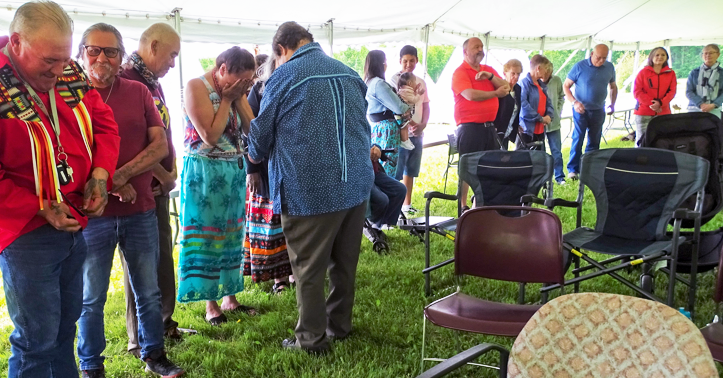 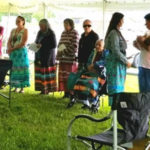 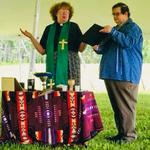 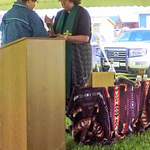 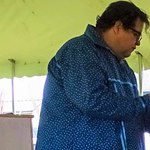 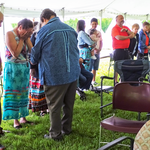 Gathering outdoors against a backdrop of four tipis, nearly 60 people from four neighbouring parishes met for National Indigenous Day of Prayer on the grounds of the Morning Sky Health & Wellness Society in Frog Lake, to experience an Indigenous expression of Anglican worship.

This service, held on Sunday, June 19, was an opportunity for the parishes of St. Mary's, Edgerton; St. Thomas', Wainwright; and St. Saviour's Vermilion to join the Church of the Nativity, Frog Lake in an act of Reconciliation and friendship.

The National Truth and Reconciliation Commission defines reconciliation in the context of the relationship between Canada, the Churches and Indigenous people as an “ongoing process of establishing and maintaining respectful relationships.” The events that took place across Turtle Island following the discovery of unmarked graves on the grounds of former Residential Schools were a testament to the need for the Church to continuously work toward repairing its broken relationship with the first peoples of this land.

Using the Standing Stones liturgy, the congregation learned how to smudge and listened to an Indigenous teaching story about reconciling relationships called “The Blind Hunter.” Gordon Hills, lay reader at St. Saviours, read Matthew 5:1-12 from the First Nations Version: An Indigenous Translation of the New Testament and led us in the prayer of the four directions. The Reverend Rachael Parker, rector of St. Mary’s, Edgerton and St. Thomas’, Wainwright, celebrated Holy Communion with an Indigenous expression of the Eucharistic Prayer, and bannock and berries in place of communion wafers. The worship music included flute songs and we closed the service with an honour song.

In his sermon, Fred Matthews, lay reader-in-charge of the Church of the Nativity, Frog Lake, posed the question: ‘how do we return to being in a good relationship with one another?’ As an illustration, he told the story of an encounter between a Cree warrior and a Blackfoot warrior at the place that came to be called witiskiwin spatinow or “the place where peace was made,” which led to a treaty and peace between two nations. This story was tied into the Beatitudes; how the Sermon on the Mount taught us the importance of being merciful, acting as peacemakers and loving our enemies. Love of God and neighbour, a central message of the Gospels, was shown to be central to many Indigenous teachings, such as the Cree teaching of Wahkotowin, the Annishnabe Seven Sacred Teachings, and the Haudenosaunee’s Great Law of Peace. The concept of love in the New Testament was explained using Paul’s words in 1 Corinthians 13. As we gathered in Sacred Circle as people of many nations, the sermon concluded with an expression of hope by Matthews that this day would be the beginning of a relationship between four parishes that will show the world what it means to be in a good relationship with one another.

Following the service, the congregation participated in a pipe ceremony led by local Elder Melvin Abraham, which was followed by a traditional feast. It was an opportunity for members of our neighbouring parishes to experience an important sacred ceremony, many for the first time. Following the blessing of the food through the smudge, the congregation also got to experience Indigenous hospitality and ways of being in good relationship through the sharing of food. The fact that no one went home hungry was an understatement.

National Indigenous Day of Prayer was a day in which we all came together as relatives to share our love for one another and our love of God. In a touching gesture of love and friendship, the Rev. Rachael Parker and Joann Mones, administrator of St. Saviour's were both gifted ribbon skirts by a new member of our parish. We hope we can continue to foster this new relationship and seek other opportunities to learn and worship together.

To help support Indigenous ministries in the Edmonton diocese, please go to the following link: Indigenous Ministries | What We Do | Anglican Diocese of Edmonton Submitted by Fred Matthews, lay reader-in-charge, Church of the Nativity, Frog Lake; Photos: Joann Mones