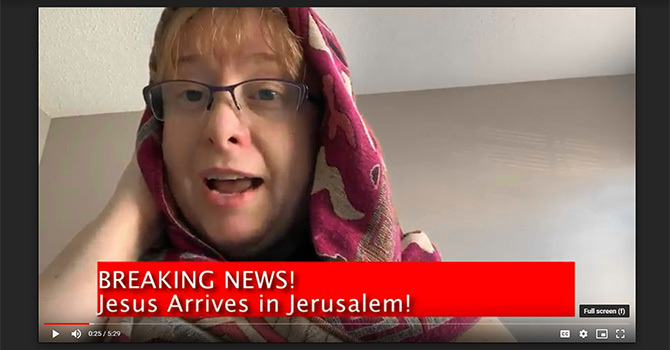 St. Michael and All Angels’ Anglican Church in Edmonton found a fun and creative way, on Palm Sunday, to share the Gospel story of Jesus’ entry into Jerusalem. St. Michael’s rector, the Rev. Colleen Sanderson says the video ‘news story’ was the brain-child of Sunday school teacher Catherine McPherson, who recruited other parishioners to make it happen. River Corvec helped write the script and edited the cell phone footage provided by parishioners who recorded themselves in their homes, from Edmonton to Quebec City.

“We literally came up with the idea at the beginning of the week, the script was written on Friday, the actors filmed themselves on Saturday, and the editing happened late Saturday night, and Sunday morning.”

One participating parishioner was Rev. Colleen’s former rector's warden, Andrea Perron who plays a citizen of Jerusalem. Andrea moved to Quebec City with three-month-old Emrys, to be with husband David (who plays Jesus), approximately two weeks before the Covid-19 situation struck. Andrea and David both grew up at St. Michael’s and were married there. Andrea’s parents, Marily and Clarence Bekolay, are current members of St Michael’s and the family loves the fact they can still worship together while the pandemic continues.

St. Michael’s hosts a Zoom worship service Sunday mornings, followed by an hour break and then a Skype Sunday school for kids. They are also planning another video for Easter Sunday. The script is written, and the characters being developed.

“We had so much fun.” says Rev. Colleen. “It brought such sunshine to our parish, in a time of darkness and struggle. I love the bloopers, they were so funny.”