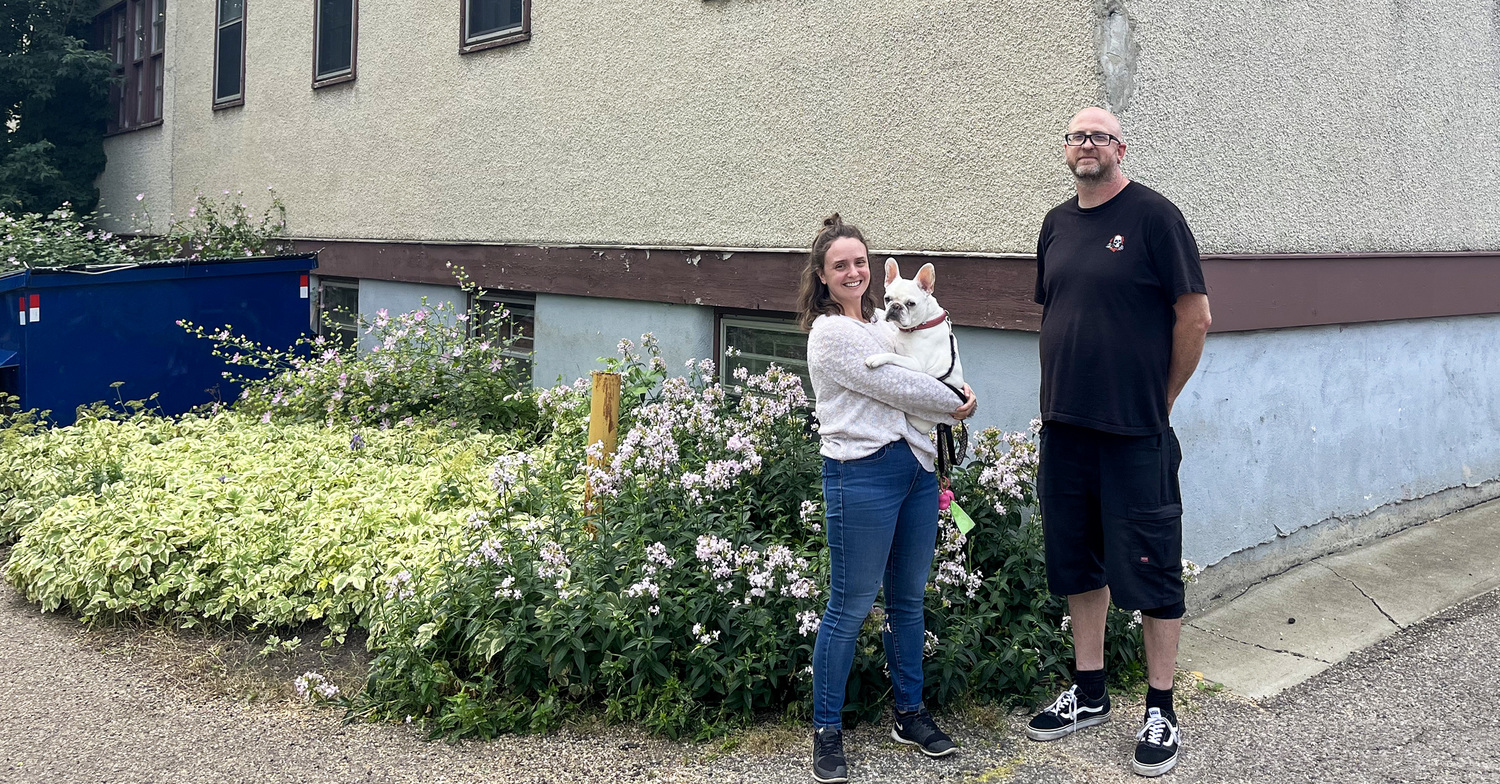 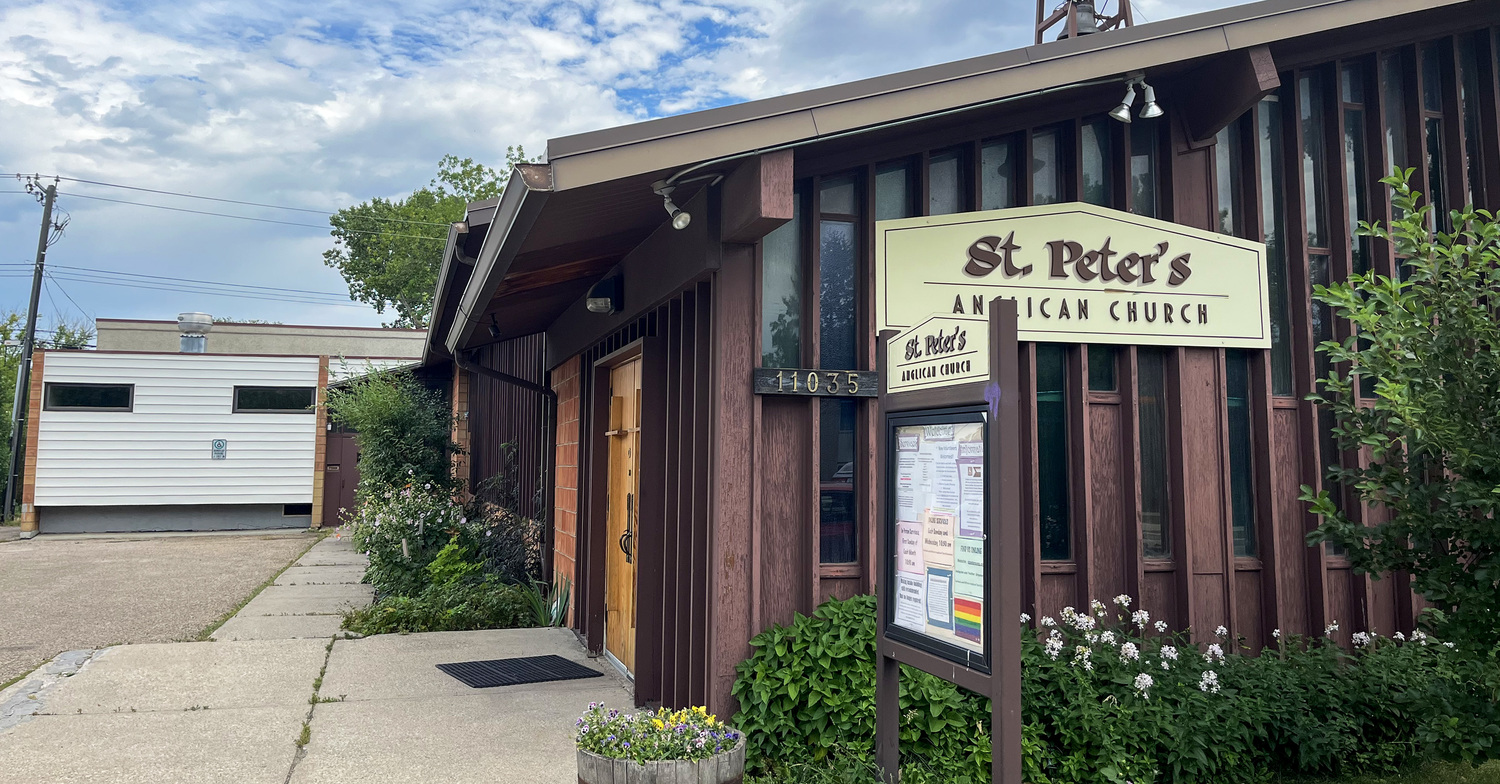 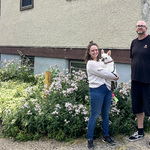 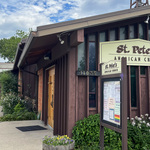 The Rev. Heather Liddell, rector of St. Peter’s, says members have been seeking ways to let their surrounding community know they are “a safe and welcoming space” for all.

While St. Peter’s is located just south of Edmonton’s busy 111th Avenue in the heart of the Westmount neighbourhood, the church building is often overshadowed by the condo complex next door.

“People keep saying to us, ‘oh, there’s a church there?’” says Liddell.

Although some Westmount neighbours may not be aware of St. Peter’s, she adds that “we’ve had new people every Sunday we’ve been open. We’re still not huge but we’re a pretty fun group.”

With a vision of raising the visibility of their church and furthering its mission, St. Peter’s applied to be part of the Mural Massive Festival, a collaborative initiative started by Grindstone Theatre and local art group Minbid. Along with their application, St. Peter's provided a copy of their parish Mission Action Plan (MAP). They designated to the mural project parish proceeds from the Edmonton diocese’s Reach Campaign for ministry and mission.

Liddell says it took time to hear back from the administrators of the Mural Massive project which since 2020 has paired local artists with community organisations to help beautify buildings in the city. Mural Massive creates and maps walking and cycling tours featuring the murals.

“This has been a two-year project and we really hit the ground running about a month ago,” she says. “We hope it will help us live into our mission and put St. Peter’s on the map.”

Once St. Peter’s application was approved, the parish was paired with local artist Jai. (Read his bio below). Liddell then reached out to Edmonton Bishop Stephen London for guidance. He suggested Steve Smith, a theological student “on loan” from the PrayerWorks’ community outreach at St. Faith’s, Edmonton, to help coordinate the mural project.

“It sounded like a wonderful project and I’m eager to help out, says Smith. “There’ll be fun things to do while observing the mural going up.”

Smith met with Epcor to determine which section of the church hall could be safely painted. He also formed a committee to plan eight days of free and inclusive events for community members to engage in as the mural is being painted.

The community festival will kick off on Saturday, September 3 with Morning Prayer, at 10 am, followed by a Smudge Ceremony. Children’s activities will be offered throughout the day. The Wildrose Fiddlers will perform, and local entertainers are invited to participate in the first of two open-stage events. The day concludes with Compline at 8 pm. A Prayer Bead workshop will be offered by a member of St. Peter’s on Sunday, September 4.

Complimentary refreshments, snacks, and programming will be offered to people throughout the week as the muralist is painting. As part of the week-day programming, which starts at 3 pm, Liddell will lead Table Talks similar to the informal Pub Theology conversations she has offered as the Edmonton diocese’s educational chaplain.

St. Peter’s will host a community barbecue (by donation) at noon on Saturday, September 10. All are invited to come out and watch the muralist and members of St. John’s Youth Group get creative by painting picnic tables to be auctioned off the next day for St. Peter’s and community outreach. The Saturday line-up will also feature musicians Dave Von Bieker and Emmet Michael, followed by a Movie Night.

The mural will be blessed on Sunday, September 11, following the 10 am Morning Prayer Service.

St. Peter’s has assembled a core team of volunteers, and they welcome the help of anyone who is willing and able to assist with the activities, or set-up and clean-up.

“You can never have too many volunteers,” Liddell says.

Amateur entertainers are encouraged to sign up for the open stage scheduled for Saturday and Sunday (3rd and 11th). If you are interested in joining the Mural Massive effort, please email Steve Smith at stpeters.muralproject@gmail.com . POSTER

St. Peter's has been paired with the artist Jai who currently lives in Edmonton and grew up in Ontario where he studied for his Bachelor of Fine Arts degree at Georgian College and Thompson Rivers University. “Jai explores the many connections between image and meaning, and the formal aspects of colour and composition in image making. He imagines a world where, while the artist acts from their own experiences, the viewer can establish their own connections between themselves, the artist, and the world around them. Where they can reflect on the effects and value of experiences and the systems by which we represent them. where he continues to develop his practice and enjoys inspiration from the city and its people.”