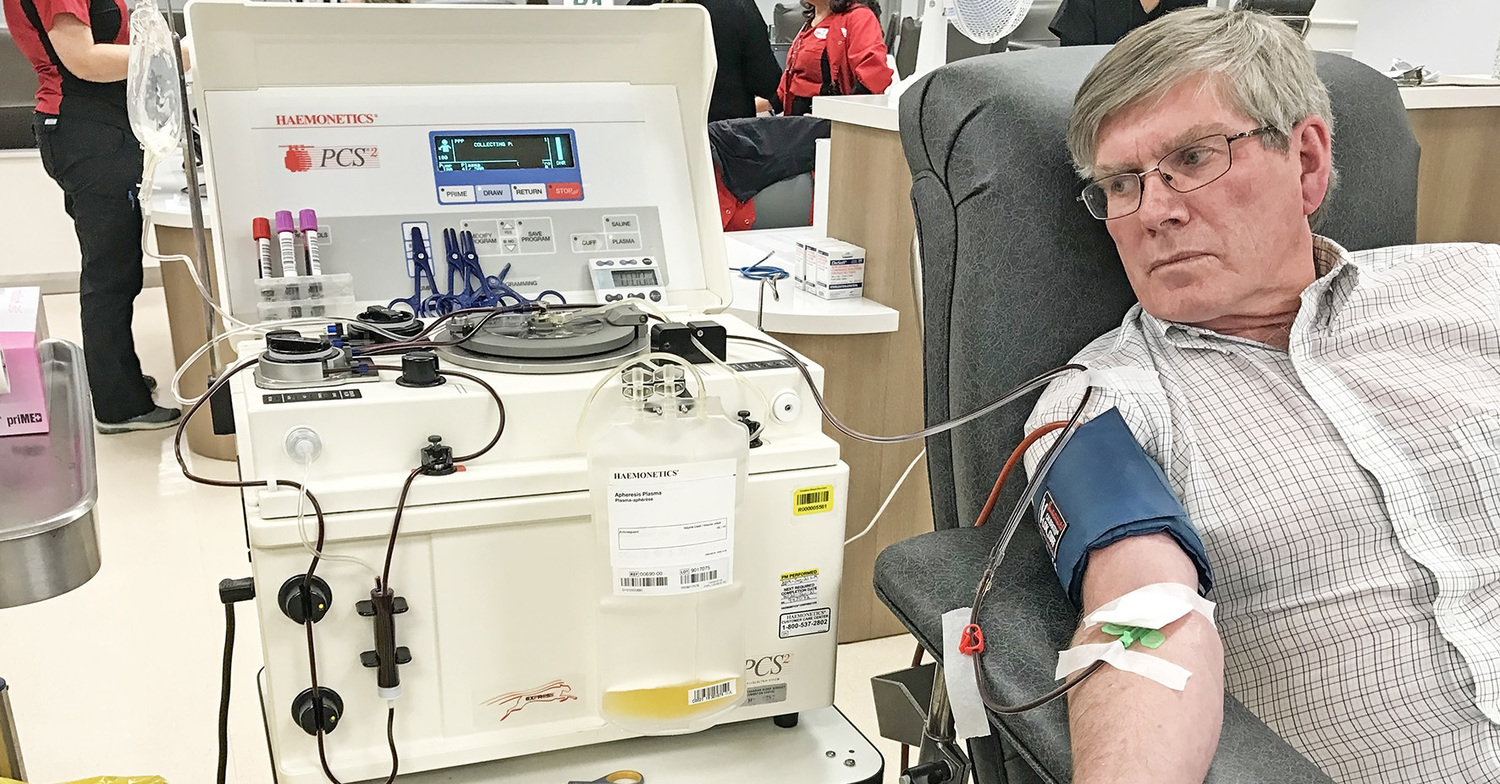 More than 50 per cent of the Canadian population will require a blood donation in their lifetime.

Harold Lake, a member of Good Shepherd Anglican Church in Edmonton, is no exception. While being treated for a peptic ulcer in the early 1980s, he needed two blood transfusions.

On January 31, 2019, Lake made his 205th donation through the Canadian Blood Services (CBS) Partners for Life program. To date, Lake who is a member of Team Anglican, has donated 71 units of whole blood and 134 units of plasma.

“Someone once asked me why I donate, and I said it was because of the cookies and the pop afterwards,” he jokes.

Regulated by Health Canada, CBS has been a lifeline to patients in need of blood, plasma, stem cells, organs and tissues since 1998.

A plasma donation can take anywhere from 20-25 minutes, as the centrifuge separates red blood cells from plasma and platelets, and returns the red blood into the donor’s body. Plasma donors can give as often as every week, while whole blood donors must wait at least 56 days (males) and 84 days (females) between visits.

Before his bi-weekly visits to the CBS main donor clinic, located west of the University of Alberta Hospital, Lake uses the CBS mobile app to complete the required donor health questionnaire. This program generates a QR code which is scanned by a CBS employee at check-in. While improving efficiency, the app also tracks data. For instance, Lake knows exactly how much time it takes his body to pump one unit of plasma each visit.

In preparation for his appointment, Lake says he makes sure to drink plenty of water and avoid greasy foods. Red blood cells are rich in hemoglobin which contains iron, so an iron-rich diet is advised for all donors. Before giving blood, a nurse takes his blood pressure and temperature, scans the QR code and asks whether any of the answers he provided have changed.

When he retired from his career as a boiler pressure vessel inspector, in the fall of 2016, Lake sought ways to give back to his community and to stay busy while his wife Kathy helped out at the church. In addition to donating blood regularly, he is a volunteer driver for the Drive Happiness seniors assisted transportation program. In the last three years, he has given more than 1,360 rides and is featured in a three-minute video.

“We are blessed with good health and fairly good income right now and a lot of the people I drive are not in that situation. And, of course, I hope someone will drive us when we can’t drive anymore,” Lake says. “Some of the ladies I drive like to take my arm or hold my hand. They also seem to enjoy my stories; especially the one about how I came to find my birth mother.”

Adopted as a baby by Al and Helen Lake, also longtime members of Good Shepherd, Lake struggled to answer two questions on the donor health survey: his biological mother’s and her mother’s place of birth. In 2008, he applied to the Manitoba government to find his birth mother and, hopefully, learn more about his biological family’s health history. He eventually discovered his birth mother still living in Winnipeg, but she was unwilling to have contact with him at that time.

“Six years later, in June, 2016, I received a call from Manitoba adoptions. They said ‘now your birth mother would like to have contact with you. I phoned her and drove to Winnipeg to meet her and other members of my family. I have a half-sister and three half-brothers.” Lake also has siblings from his adoptive parents, a sister also adopted, and two brothers. (Al Lake died in 2012 of kidney failure, and Helen died at Christmas-time in 2017 at the age of 95.)

The Anglican diocese of Edmonton joined the CBS Partners for Life program in 2016. This year we hope to donate 100 units of blood. Edmonton residents can donate blood at the Main Donor Clinic, 8249–114 Street, Edmonton, Monday through Saturday, or at one of many mobile clinics throughout the city. There is also a shuttle service that will transport donor groups (3-8 people) from any location in Edmonton.

Outside city limits, there are mobile clinics in communities throughout rural Alberta. The mobile clinic calendars can be downloaded from the diocesan website: https://edmonton.anglican.ca/our-partners/canadian-blood-services