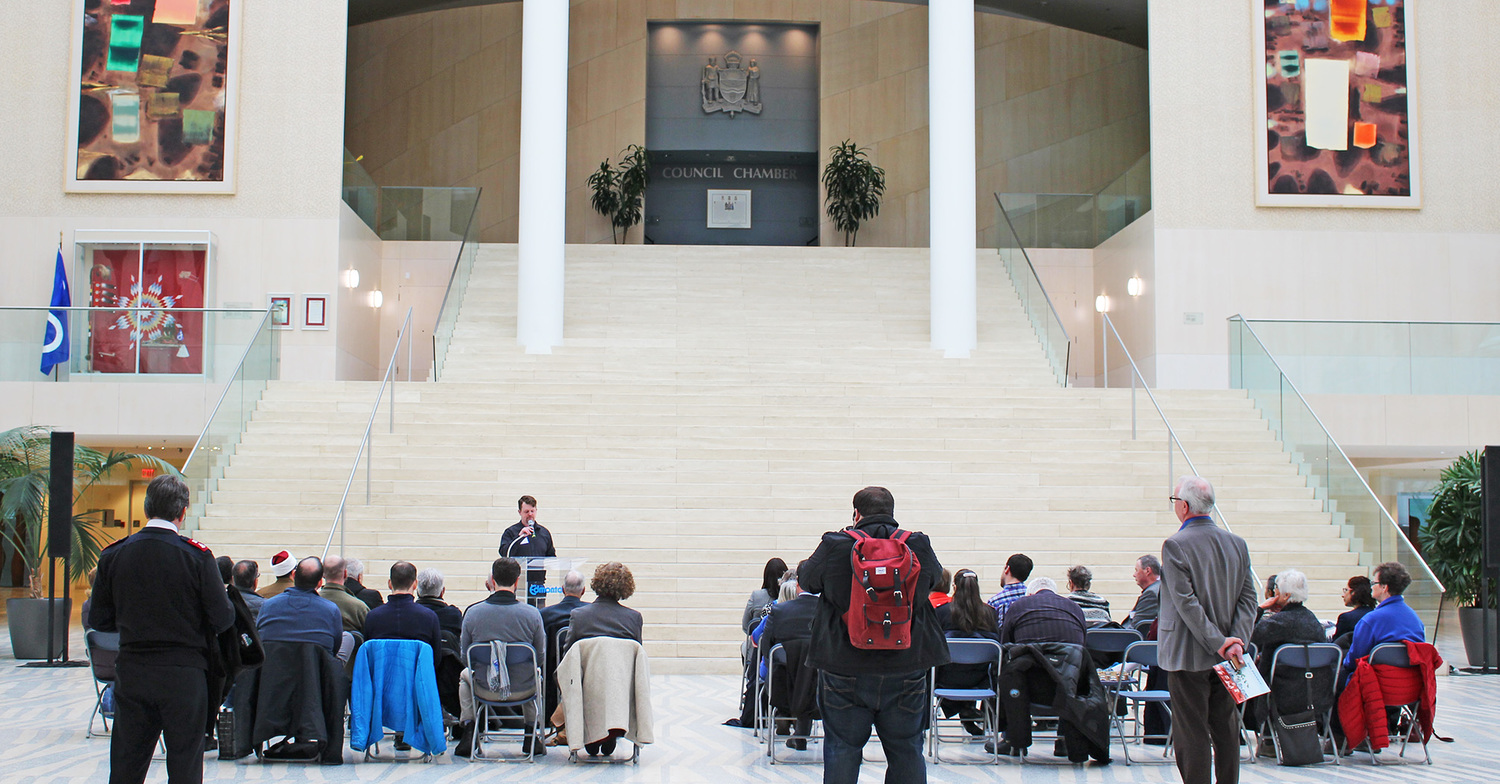 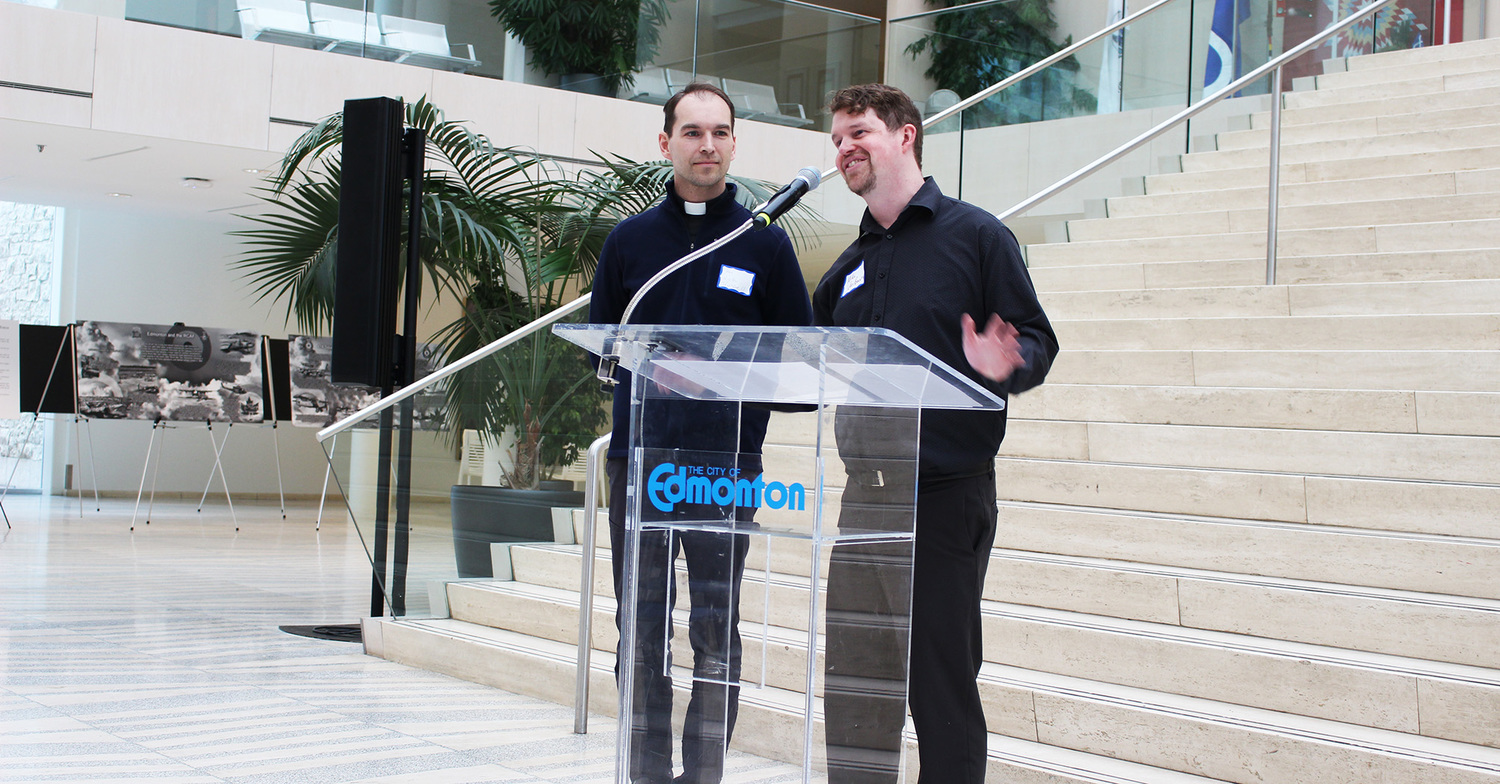 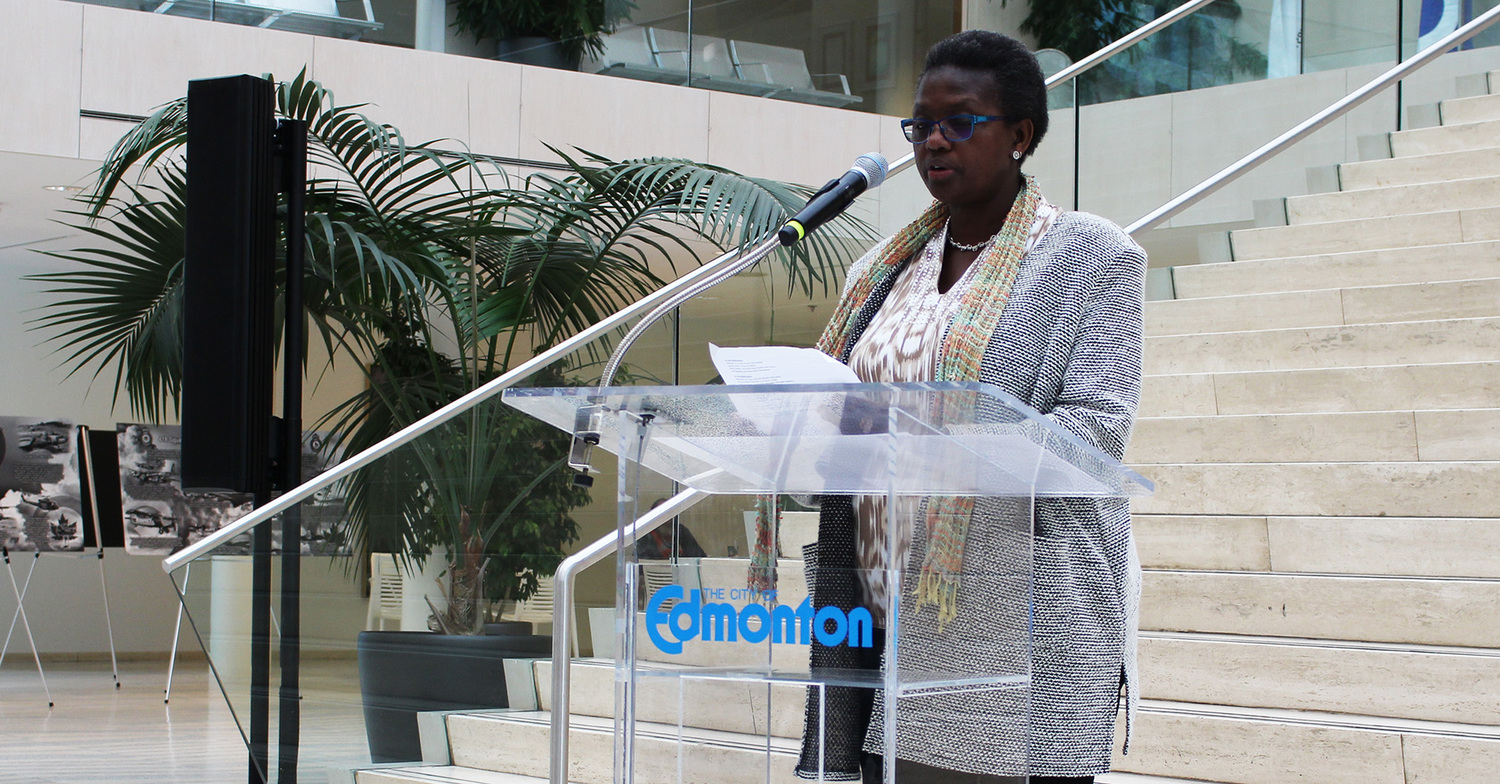 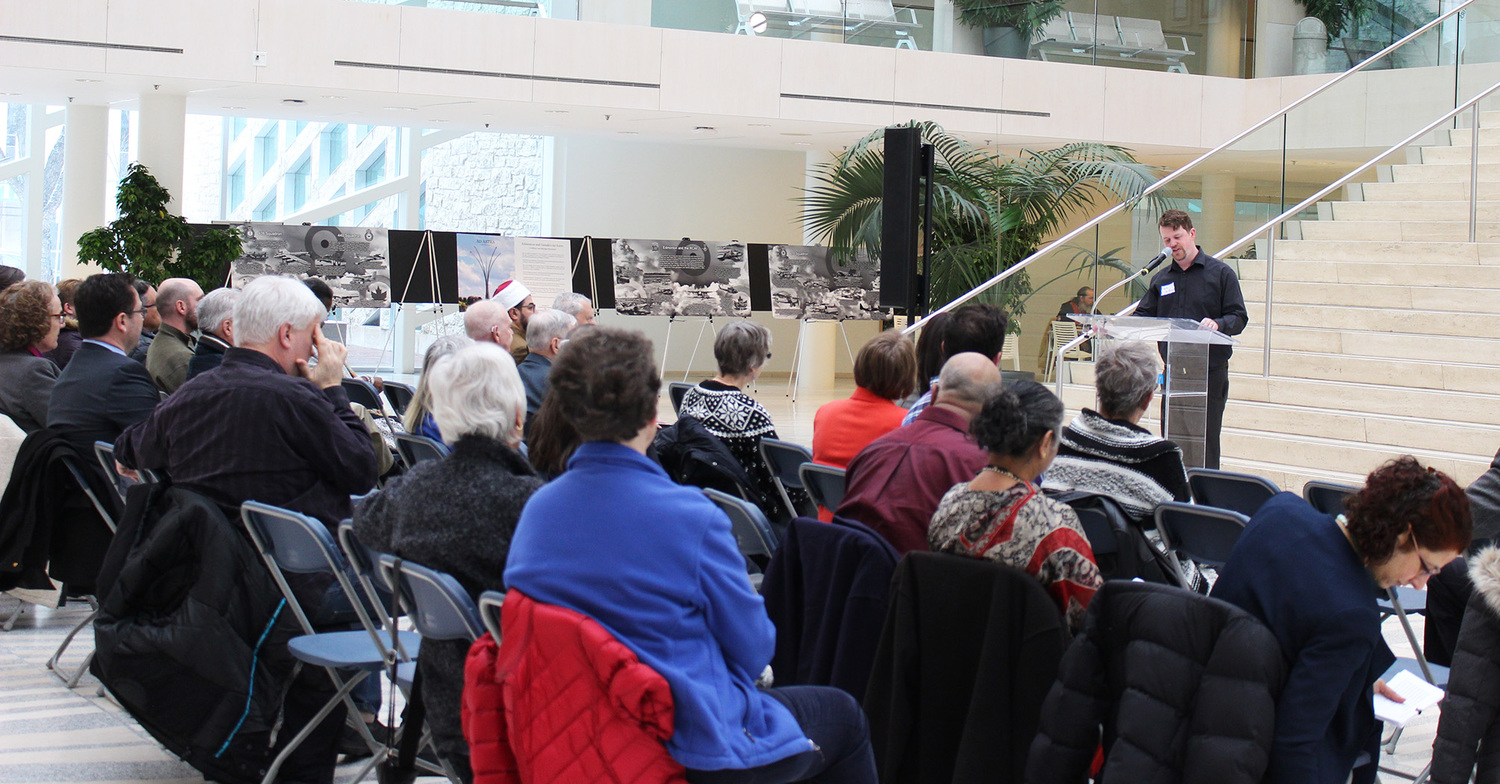 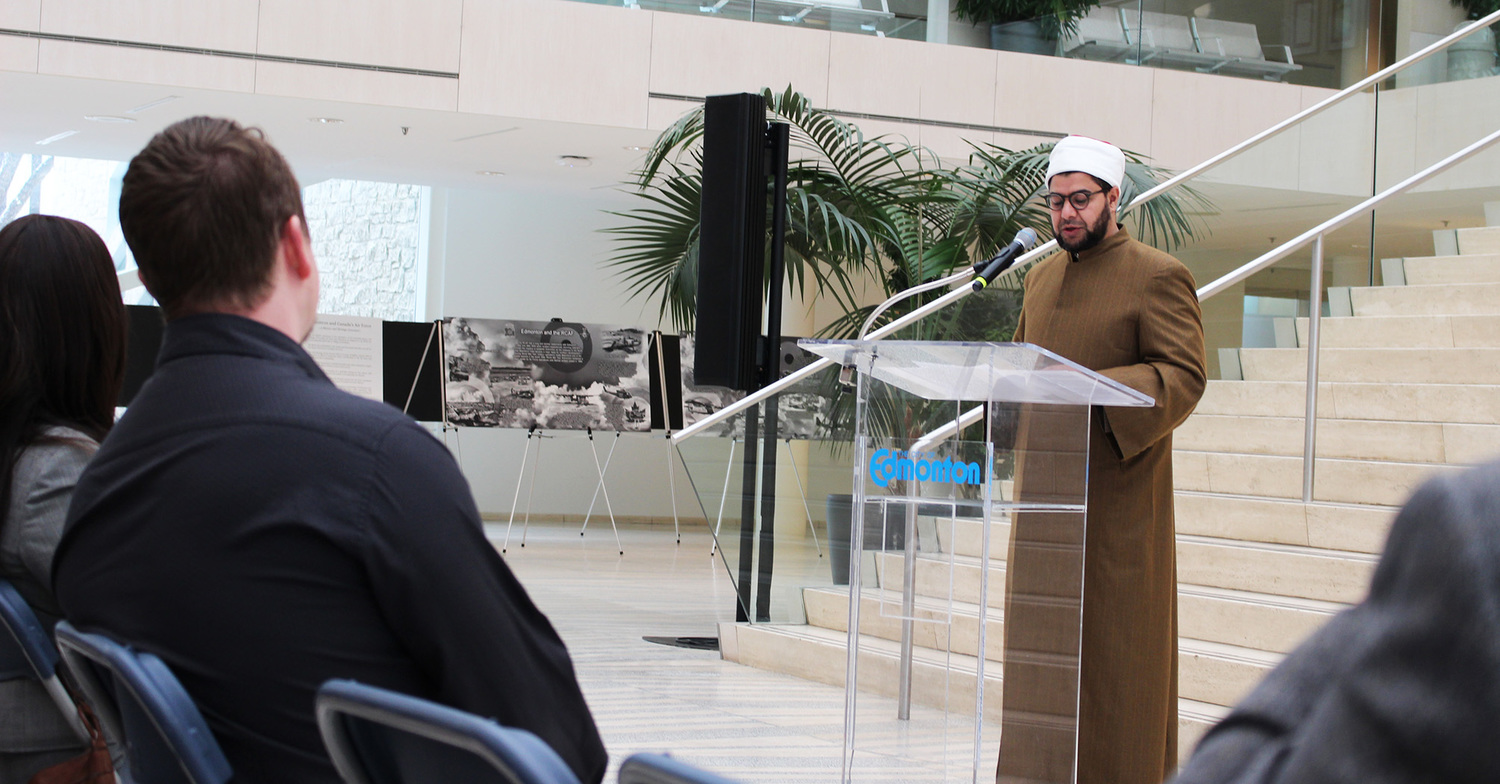 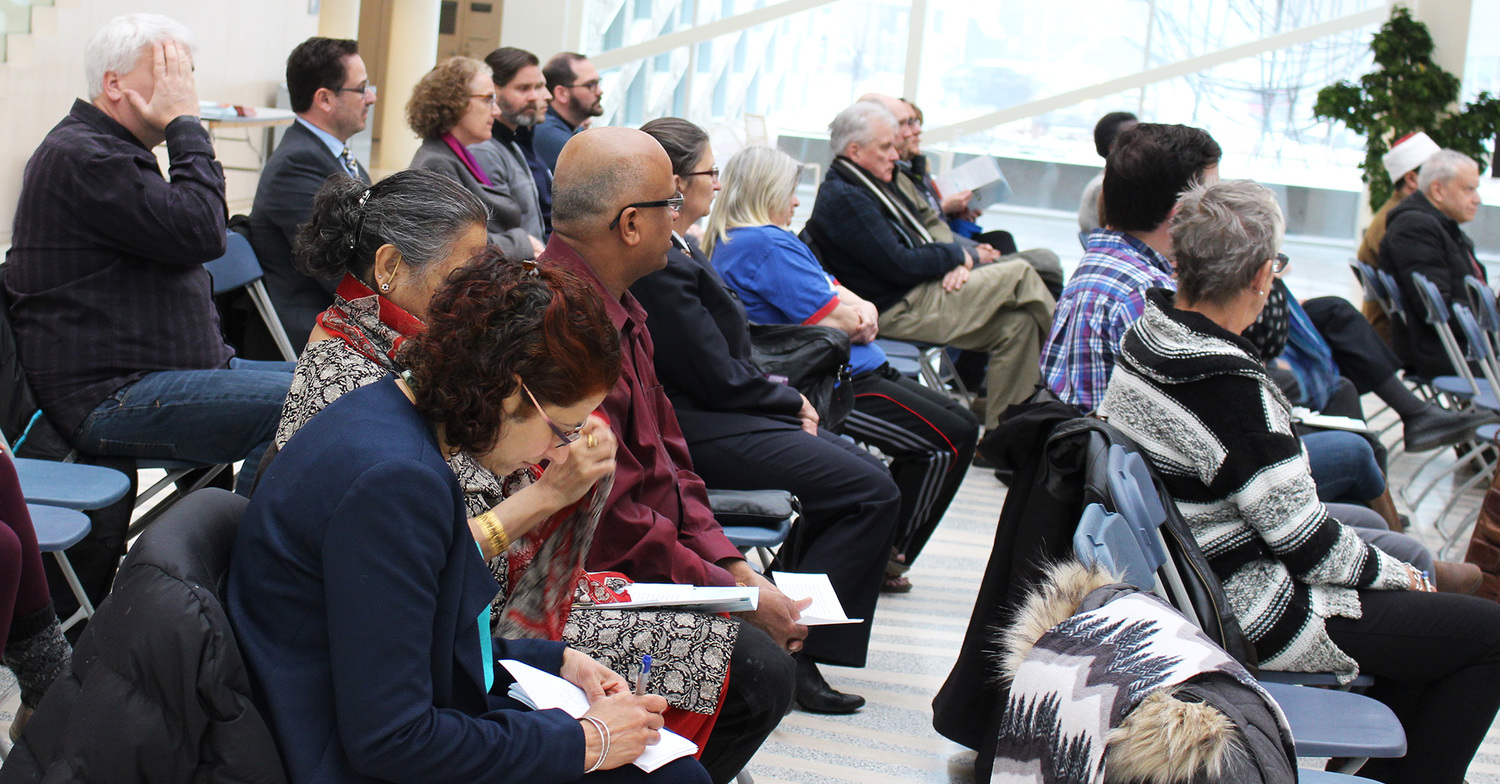 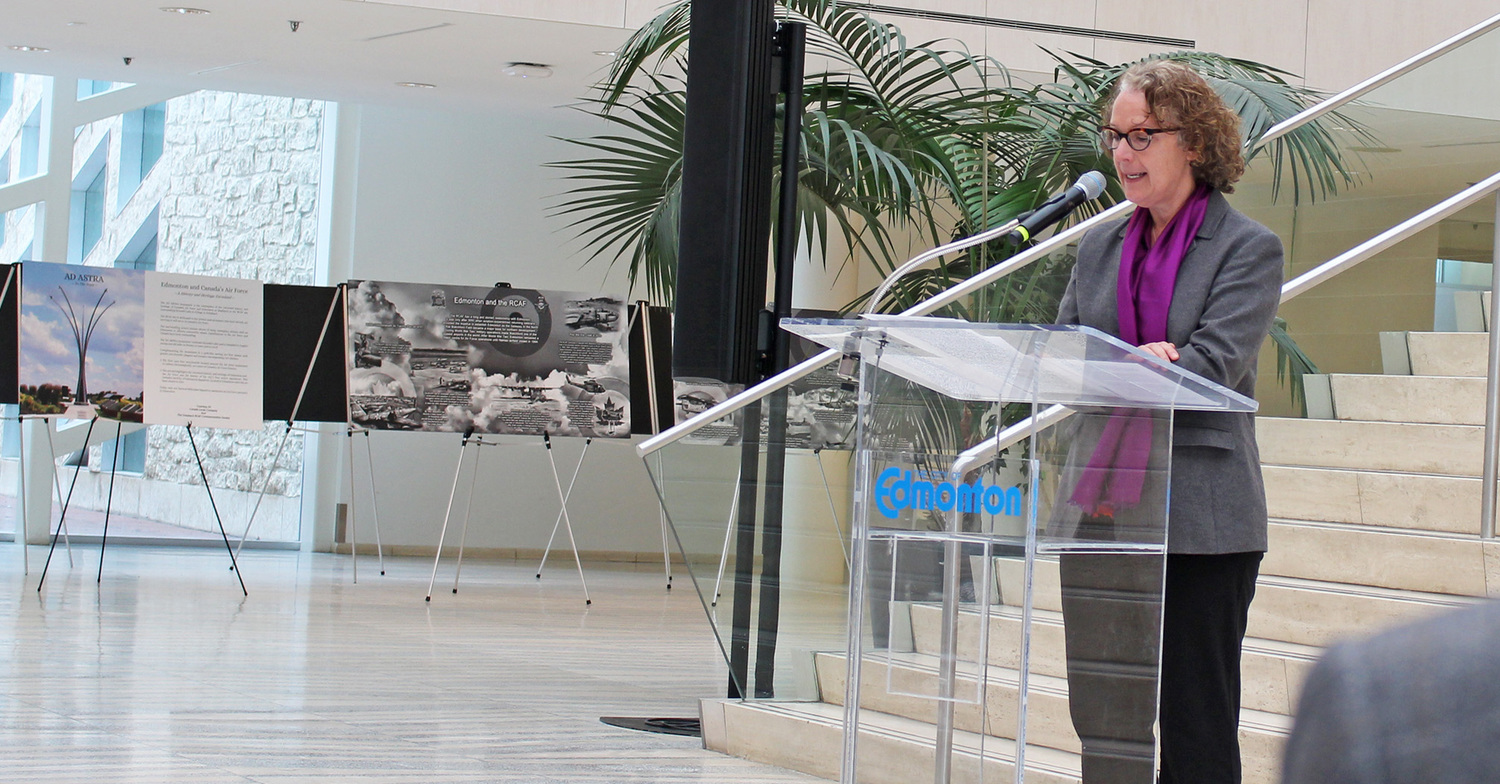 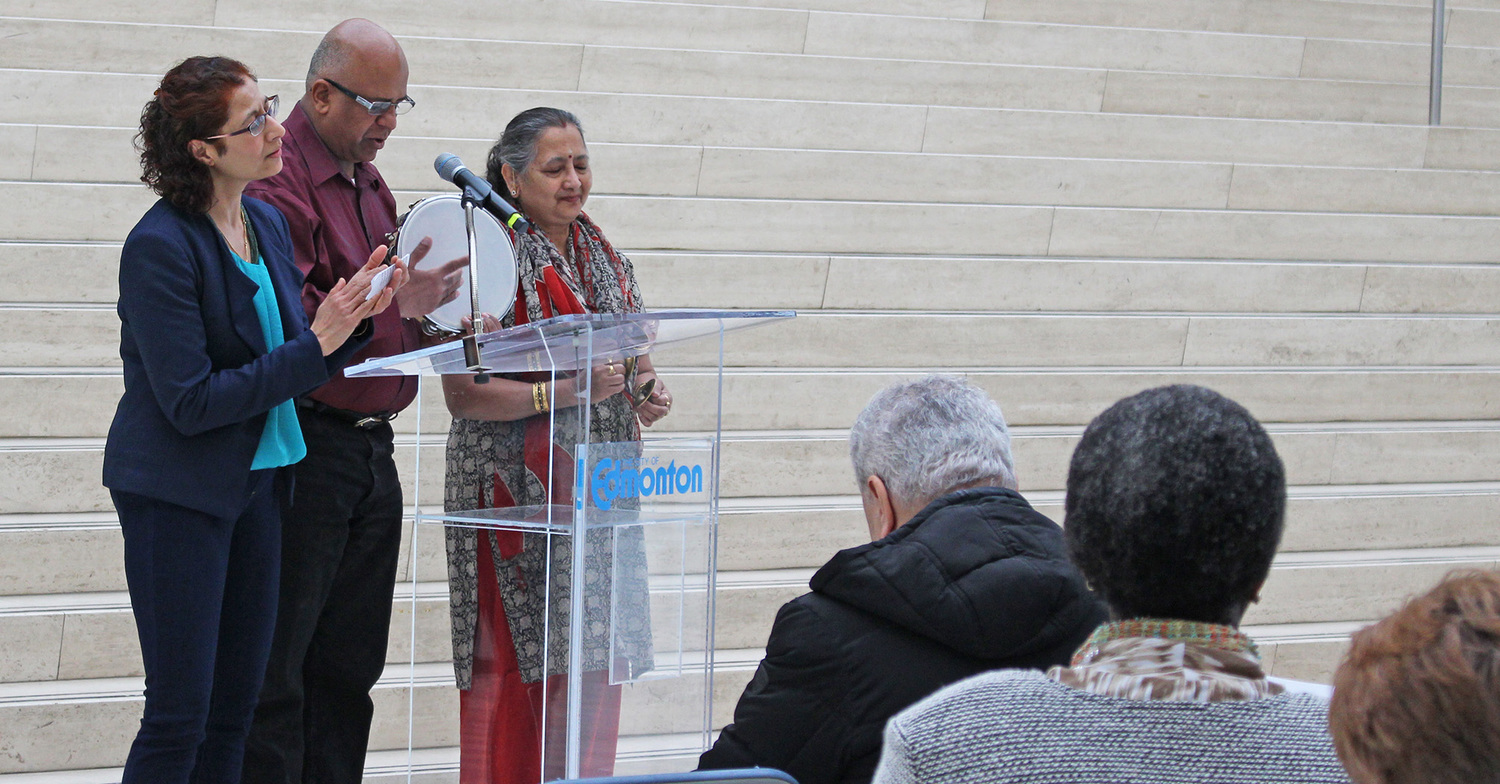 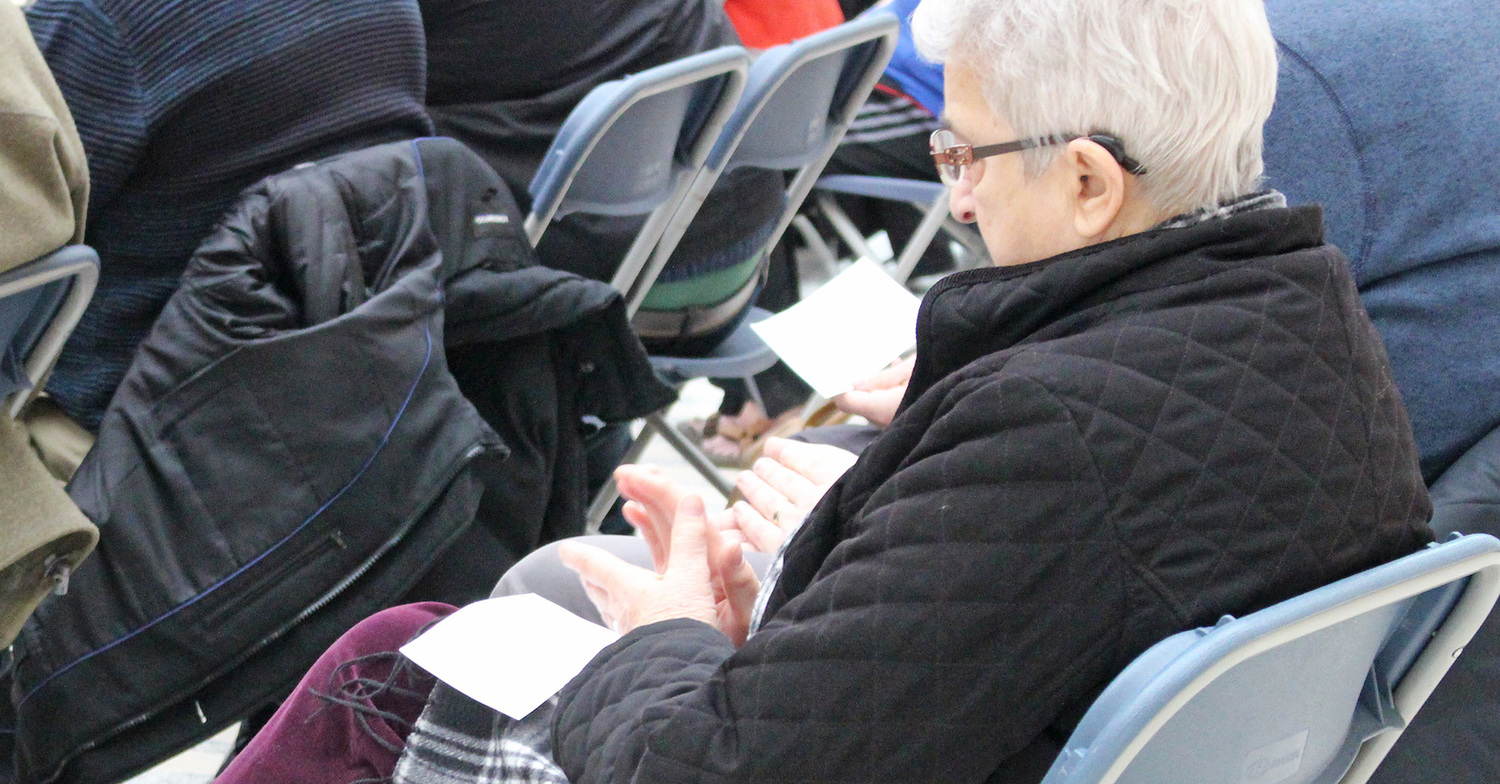 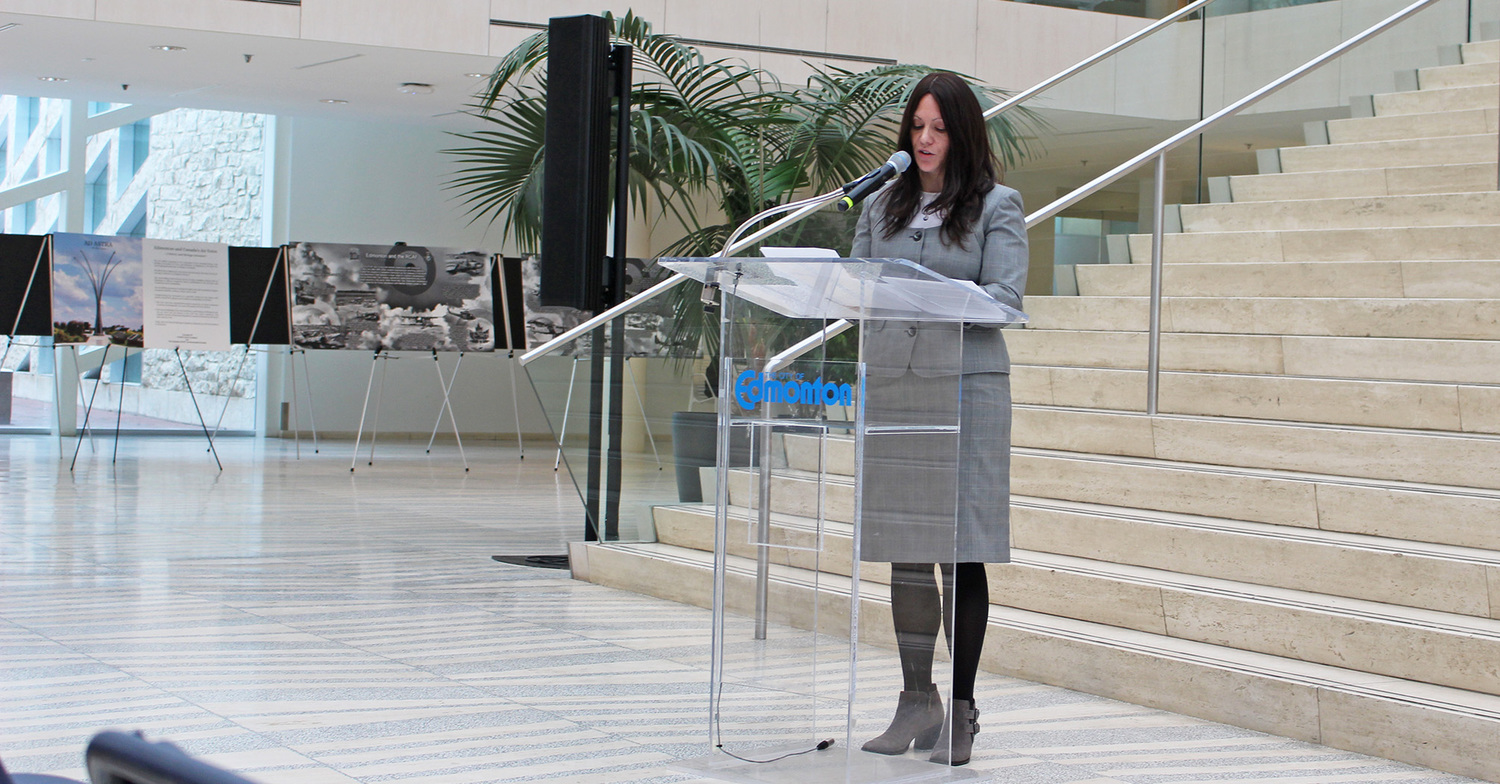 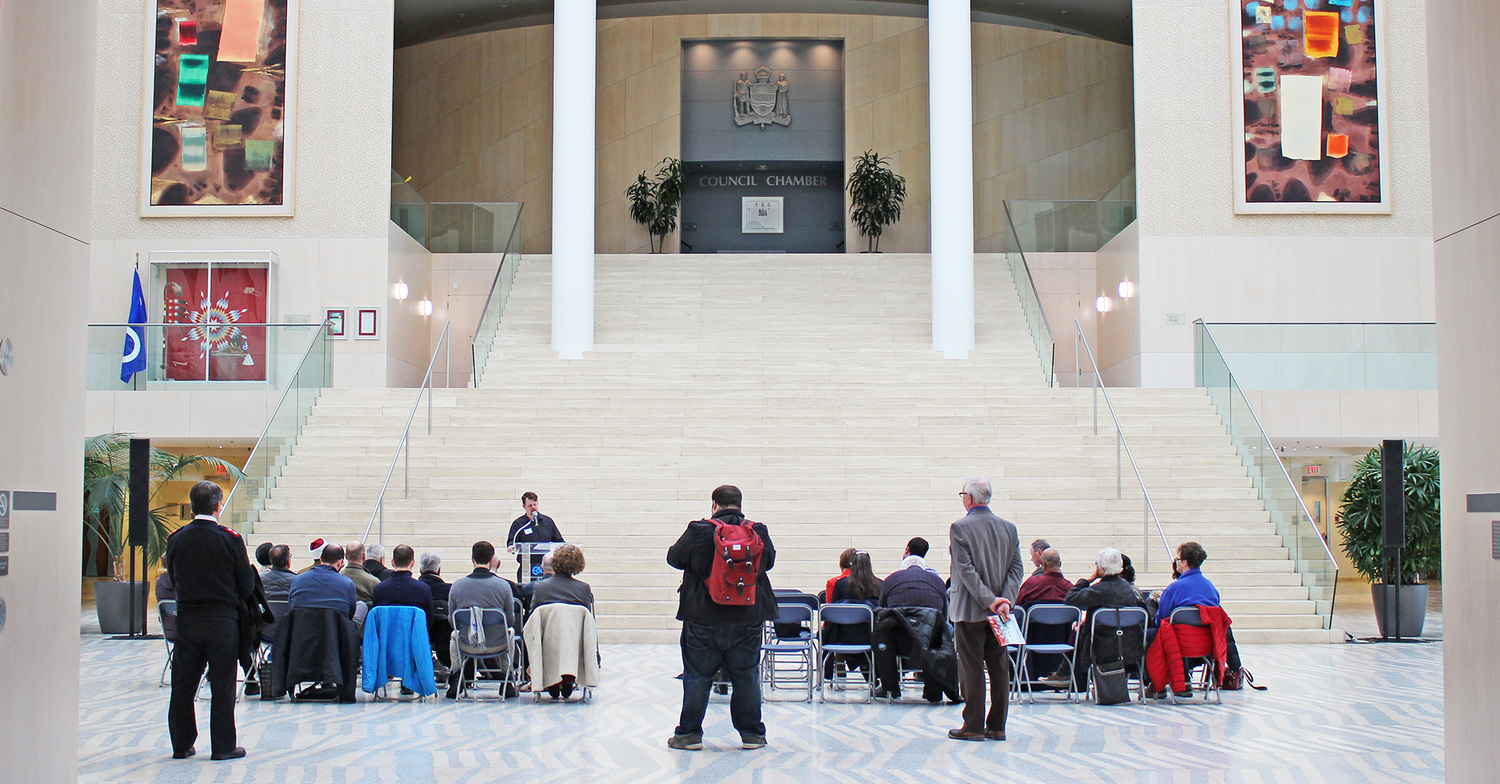 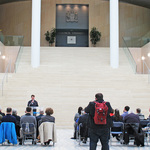 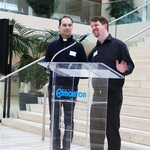 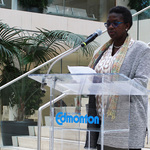 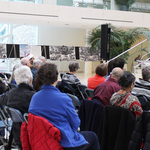 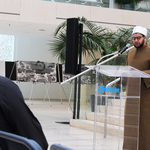 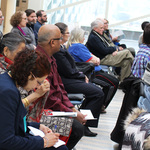 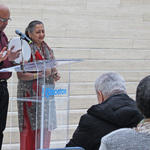 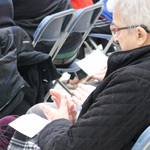 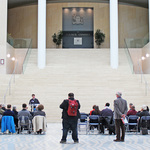 Tuesday, March 27th, on a snowy spring morning, about 30 members of the interfaith community gathered at City Hall to reflect on the past, present and future of their shared work to end homelessness in Edmonton and to join in prayer for its success.

Pastor Mike Van Boom, emcee for the event and Ambassador for the Capital Region Interfaith Housing Initiative (CRIHI), described how the idea for the gathering developed out of conversation with friends from the Moravian Church and with the Rev. Nick Trussell of Christ Church Anglican. Rev. Trussell noted how appropriate it is, from a Christian perspective, to hold such a gathering in Holy Week; that just as Jesus lamented over Jerusalem in the days before His crucifixion, so we may lament over our city and the tragic living situation of many of its people. And just as His resurrection brings hope, so we can look forward with hope to better things to come.

Lucy Kaakyo, representing the Catholic Archdiocese of Edmonton, led the way sharing prayers that may be used when a person or family moves into a new home, asking particular blessings for each room.

Van Boom then led a reflection on the past, remembering events of the past 10 years that have catalyzed the movement to end homelessness, as well as studies that shocked the community; studies that showed the cost to “keep a person alive on the streets” (including shelters, police intervention, trips to the emergency room, etc.) at $100,000 per person per year, while housing that same person might cost $35,000; studies that show 1 in 4 families continue to struggle, with 20,000 households spending more than 50% of their income on housing.

Even so, there have been changes for the good. In particular, Van Boom said there is now a new way of thinking about homelessness and a completely new approach to the problem since “housing first” has been adopted as a guiding principle. No longer are the homeless expected to “fix their problems" before they are helped into housing. Now it is understood that, instead, the stability of having a home enables people to deal with the issues that brought them to homelessness. As well, Van Boom described a great improvement in coordination between social agencies, greater connection and cooperation among faith communities, and new programs like Welcome Home that aim to provide the social support that people need to make a successful transition from living on the streets. There is also a growing awareness among faith communities, he said, that the land they own might be useful for housing, as demonstrated by the transformation of Westmount Presbyterian Church. Speaking of all the faith-based agencies on the front-lines of dealing with poverty, Van Boom said, “There are so many in the circle, we can’t name them all.”

Prayer followed, led first by Imam Dr. Amin, representing Rahma Mosque, Edmonton Council of Muslim communities and MAC Islamic Centre. Dr. Amin’s prayer included the thought that Edmonton is an “excellent shared space” that we cultivate for our children and the invocation that God “help us to prosper, share and work together.” Van Boom, of the Christian Reformed Church, then sang a prayer in the form of the song, Come Alive, based on the passage of the dry bones from the book of Ezekiel chapter 37.

Batya Ivry-Friedman, CRIHI Housing Coordinator shared more of what is presently happening in the struggle against homelessness. She explained how the 10-year-plan to end homeless, which was inacted nine years ago, called for 1,000 new housing units. Only 200 of those have been created. “Racism, classism and fear” exist in many communities where affordable housing has been proposed, she said. At the same time, however, there are “signs of warmth and willingness.” One of the ways in which the CRIHI is very active is in the facilitation of community conversations around affordable housing, and in those meetings they see “small fires burning, which can be fanned into a brighter blaze.”

The Rev. Jason Anderson of the Lutheran Church then led in prayer, followed by the Rev. Rebecca Craver of the Moravian Church. They led prayers for help and wisdom which were followed by the final reflection: looking forward to the future of the work.

Van Boom acknowledged the difficulties of bringing diverse groups together to tackle the problem of homelessness, challenges which require patience and wisdom but which can and must be overcome. He noted that the “quality of the partnerships involved” is often a condition now of government funding for new projects. The next challenge for the interfaith community, he said, is to get “boots on the ground.” There is a new push to move from looking at homelessness “from a broad, city-wide perspective (as has happened so far), to now energize local communities, to engage local temples, mosques, churches and gudwaras.” Along with that Van Boom said there must be a change from a “charity” approach of giving handouts, to a “community care” approach, supporting individuals to climb out of homelessness into stable, productive lives. In all these challenges, though, we can remember that the “future is in the hands of the Creator, who believes in our cause, wants us to succeed and is right in there with us.”

Prayers for hope and direction were led by the Rev. Ingrid Cramer-Doerschel, representing the Edmonton and District Council of Churches, and by the Rev. Brian Kiely of the Unitarian Church, who noted the location of the meeting, on the steps leading to City Council Chambers, as a clear indication that Edmonton is a place where local government is “not afraid of religion, but works with us.”

Three members of the Sathya Sai Baba Center of Edmonton, Nalina Kumar, Chandran Iyer, and Chummy Nageshwar engaged the audience in a song, and then Rabbanit Batya Ivry-Friedman of Beth Israel Synagogue led the final prayer, based on thoughts arising from the upcoming Jewish celebration of the Passover.

Plans are underway for what the CRIHI is calling “Phase Three” of its work to end homelessness. Watch for details in the fall of 2018.