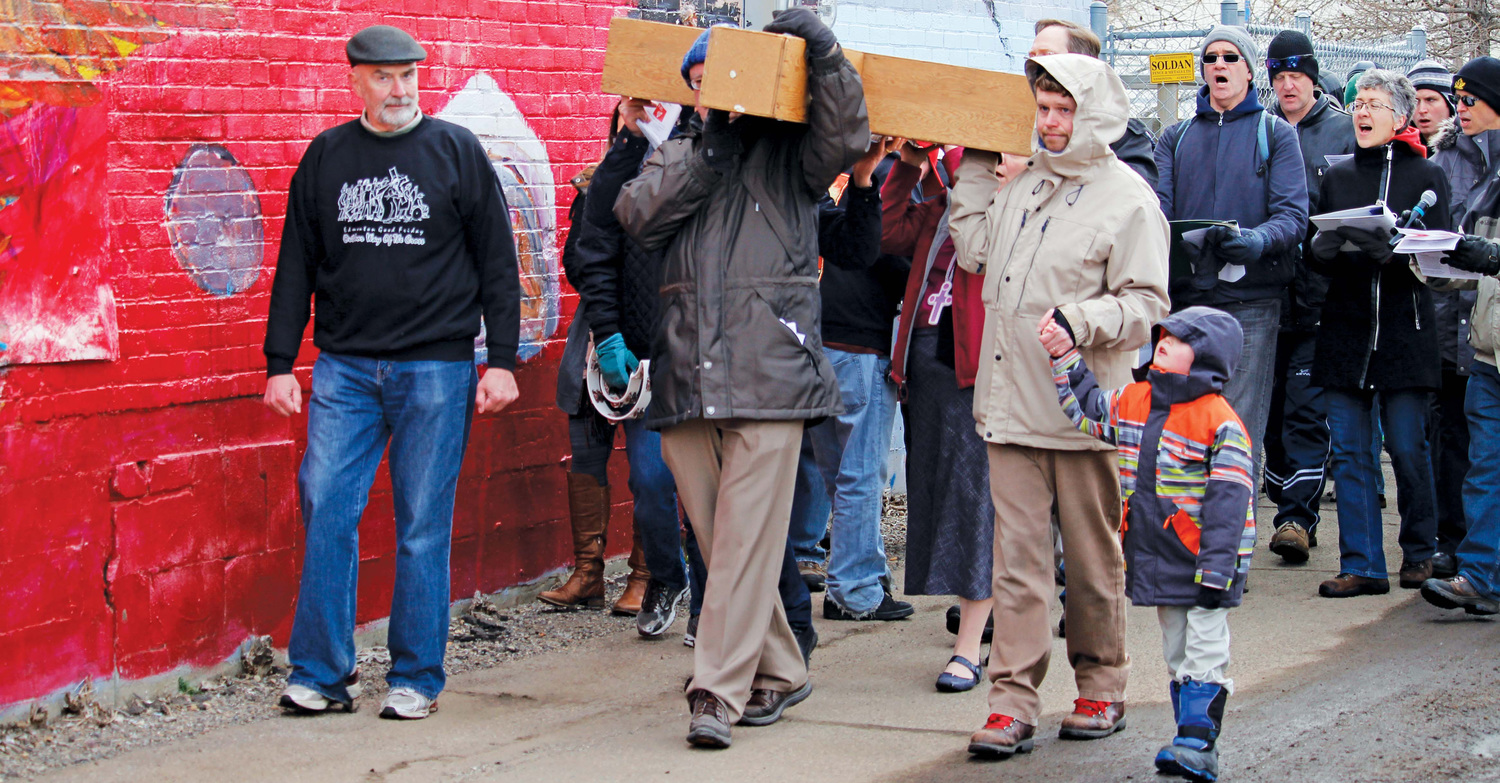 On Sunday, February 4th, Jim Gurnett (pictured left taking part in Outdoor Way of the Cross, 2016) was presented with The Rev. Marilyn McClung Memorial Award in recognition of his “outstanding contribution to the ecumenical landscape of Edmonton.” Gurnett received this award during the Annual General Meeting of the Edmonton & District Council of Churches (EDCC).

Jim currently works as a pastoral associate at Inner City Pastoral Mission and attends the Community of Emmanuel fellowship there. He is also a member of the Diocese of Edmonton Social Justice and Advocacy Committee. He was Director of Community Services at the Bissell Centre, Executive Director of the Edmonton Mennonite Centre for Newcomers and is the founding Executive Director of The Hope Foundation. He has been actively involved with the Good Friday Outdoor Way of the Cross for 20 years. Gurnett served as the Spirit River-Fairview MLA in 1985-86. He even has his own Wikipedia entry.

As written in the Annual Reports of the EDCC: “The Rev. Marilyn McClung Memorial Award for Ecumenism came into being to honour the life of Rev. Marilyn McClung, who passed away on February 7th, 2001. Marilyn had served as EDCC representative for the Anglican Diocese of Edmonton under the leadership of Bishops Ken Genge and Victoria Matthews. Marilyn served on the executive of the EDCC as Secretary and Vice President; tragically, however, because of health concerns, she was unable to take on the role of President. In her ecumenical endeavours, Marilyn served on several committees helping to organize dialogue days, prayer services and was a key leader behind the Jubilee 2000 “J2K Festival” in Edmonton. Marilyn also devoted her energies to continuing ecumenical education for herself and others…”

After receiving the award, Jim shared his thoughts about his long commitment to ecumenism:

“I grew up in a very small corner of Christianity, in a movement called the Christian Brethren. Unlike many Christian communities, we did not worship in a space with a front and a back, but rather in a circle, with the Host on a table in the middle. Those childhood years nourished my pleasure in ecumenism. The circle spoke of a whole world of diversity, no one more or less than another, each worshipping in their own way, but also linked to each other to create the whole circumference.

“As I got a little older I read about one of the people who began the Christian Brethren, a man named Anthony Norris Groves, and I took for myself some words of his in writing to a friend in 1836. Groves wrote, "... I would infinitely rather bear with all their evils than separate from their good." He wrote of his concern that Christian communities were more intent on being identified by what they witnessed against in the practices and theology of others, focussed on what they felt others were doing wrong, than in what they witnessed for-- the love of Jesus and the redemptive power of his message. In our commitment to ecumenism we are using the model of Jesus, who called a widely varied group of people to be his companions as they walked the roads of Israel 2,000 years ago. These people had nothing else in common but their commitment to Jesus.

“Today, still, there is joy and learning to be experienced in the commitment to ecumenism, a freedom and excitement in knowing that, for all our differences, all we stumbling followers of Jesus share a common reality, the life of the Comforter within. I experience this each year as we walk and pray in the streets during the Good Friday Outdoor Way of the Cross. And I pray that the call of ecumenism will grow and strengthen in every corner of Christian community.”