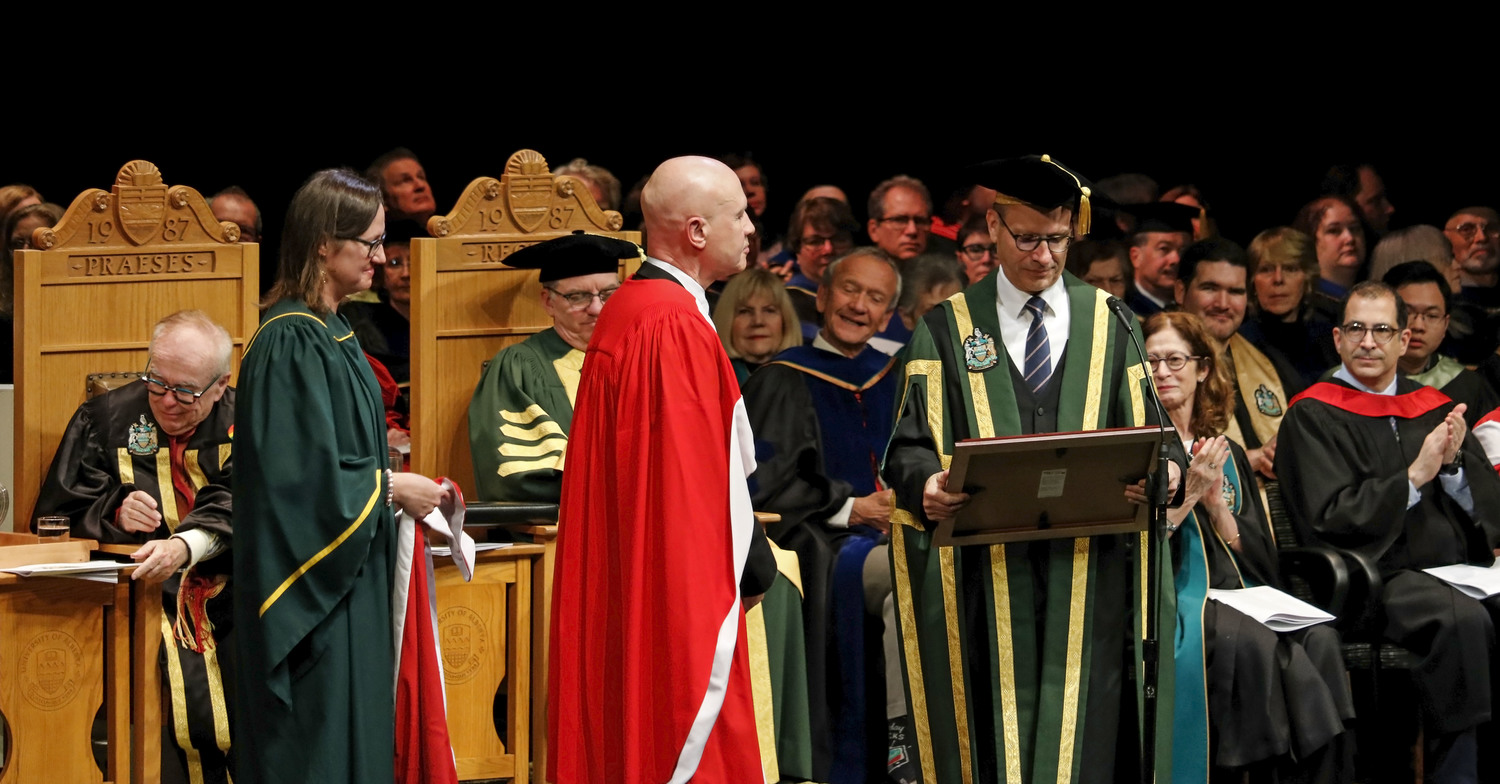 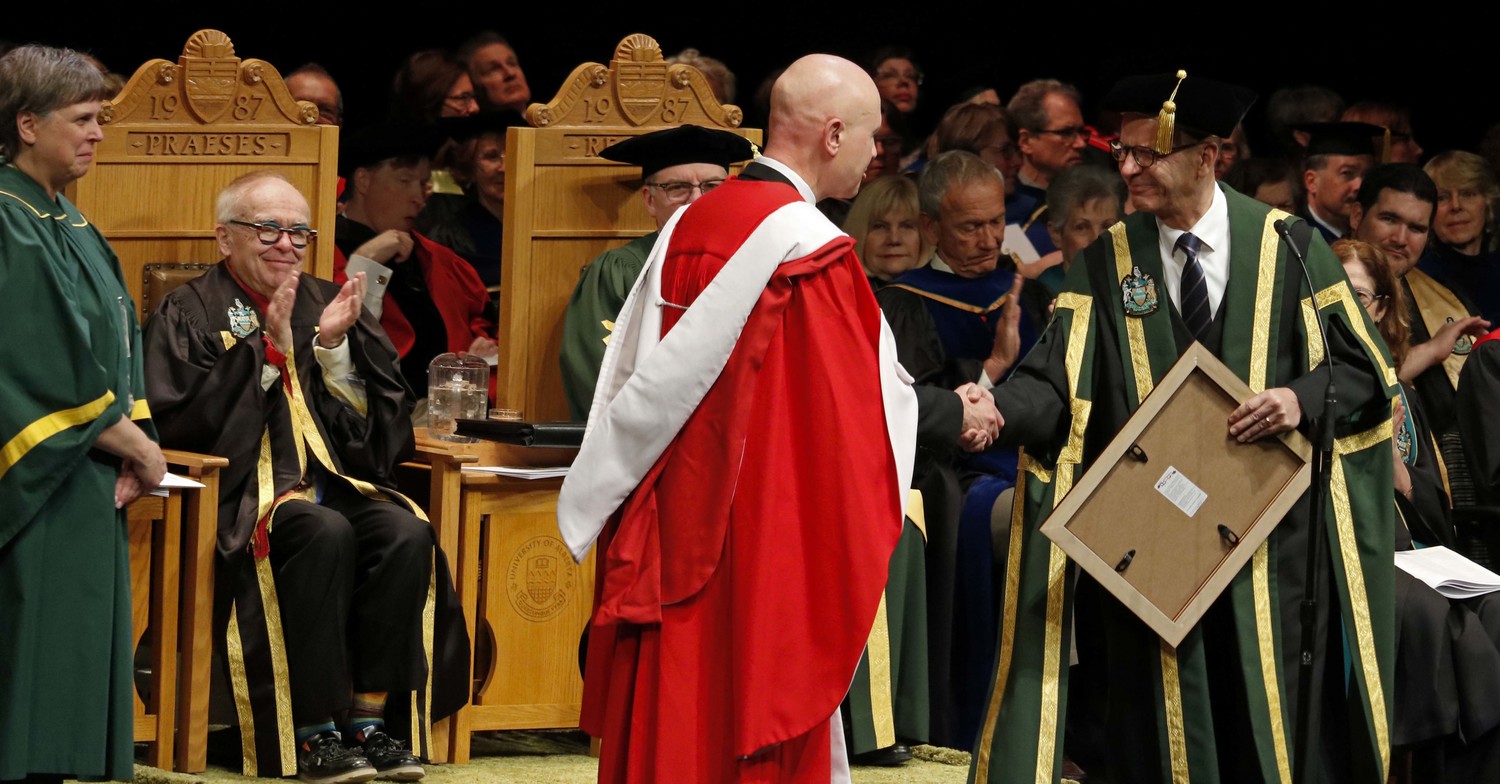 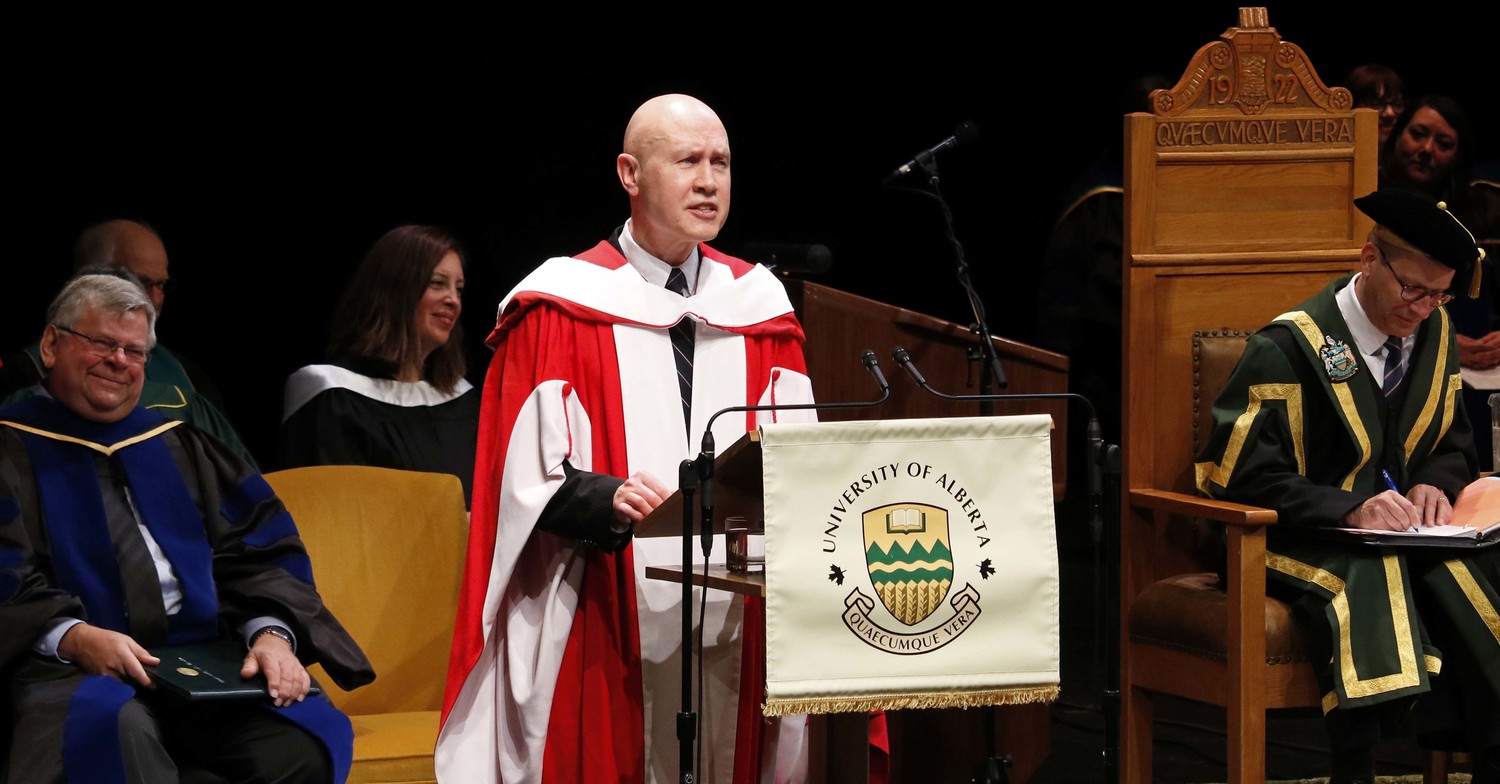 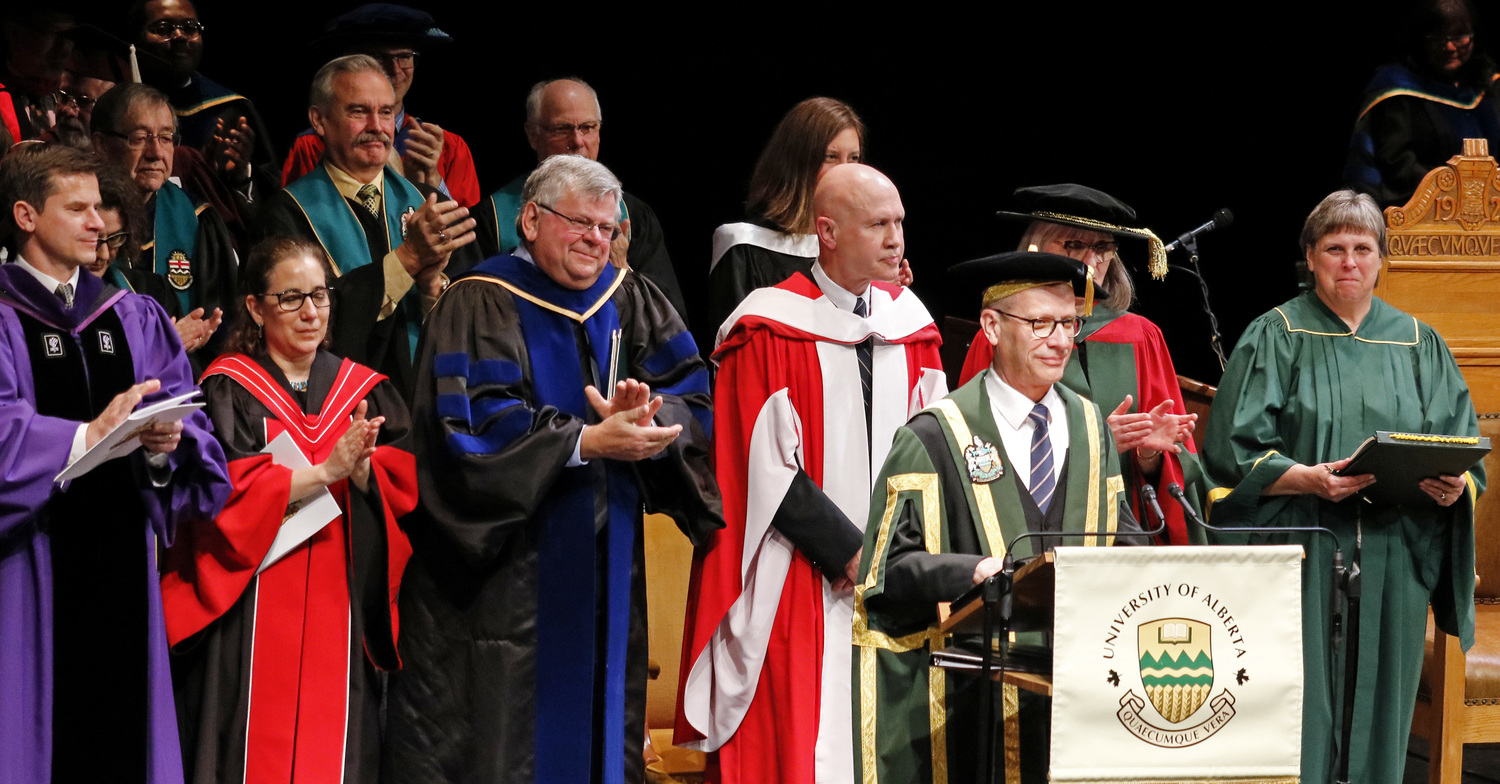 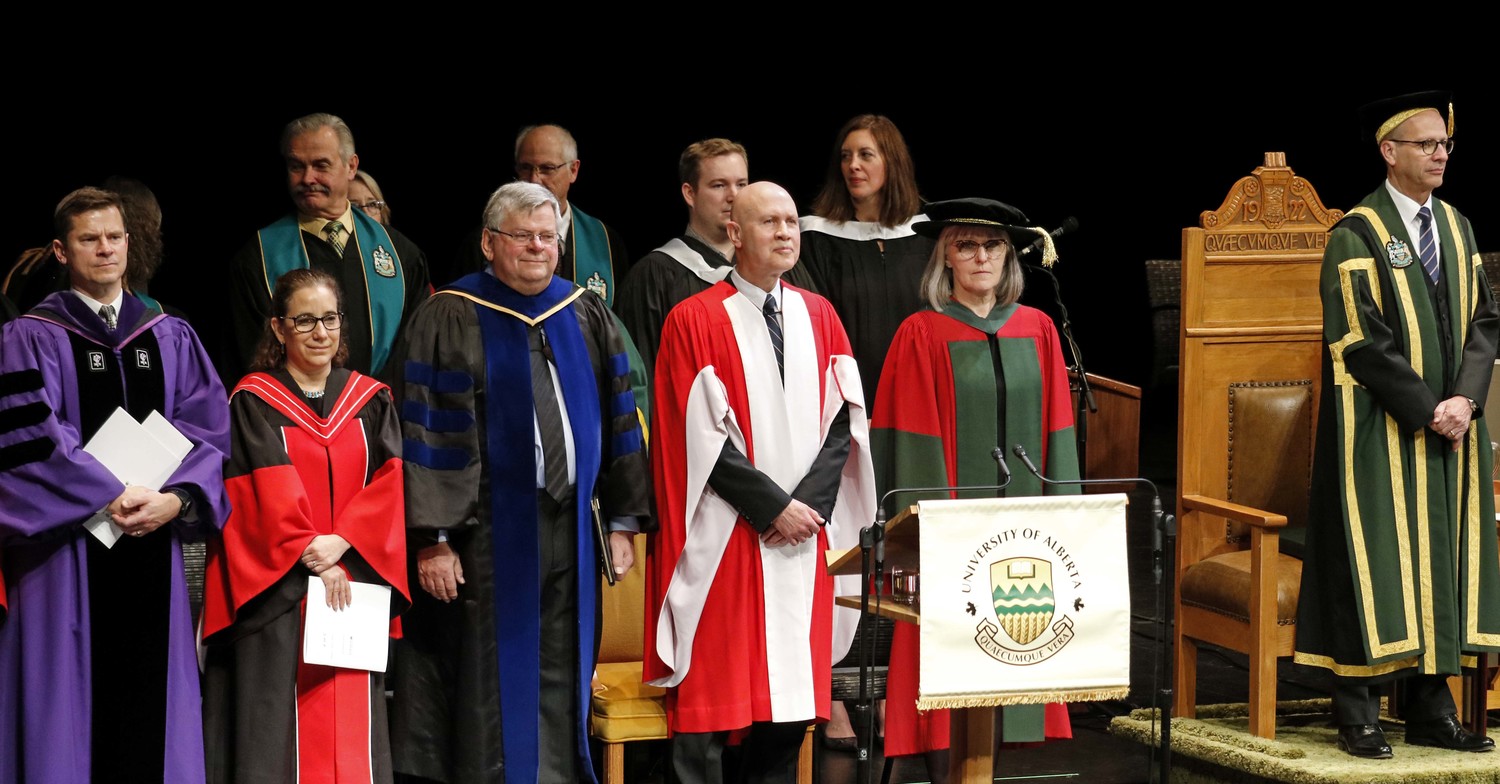 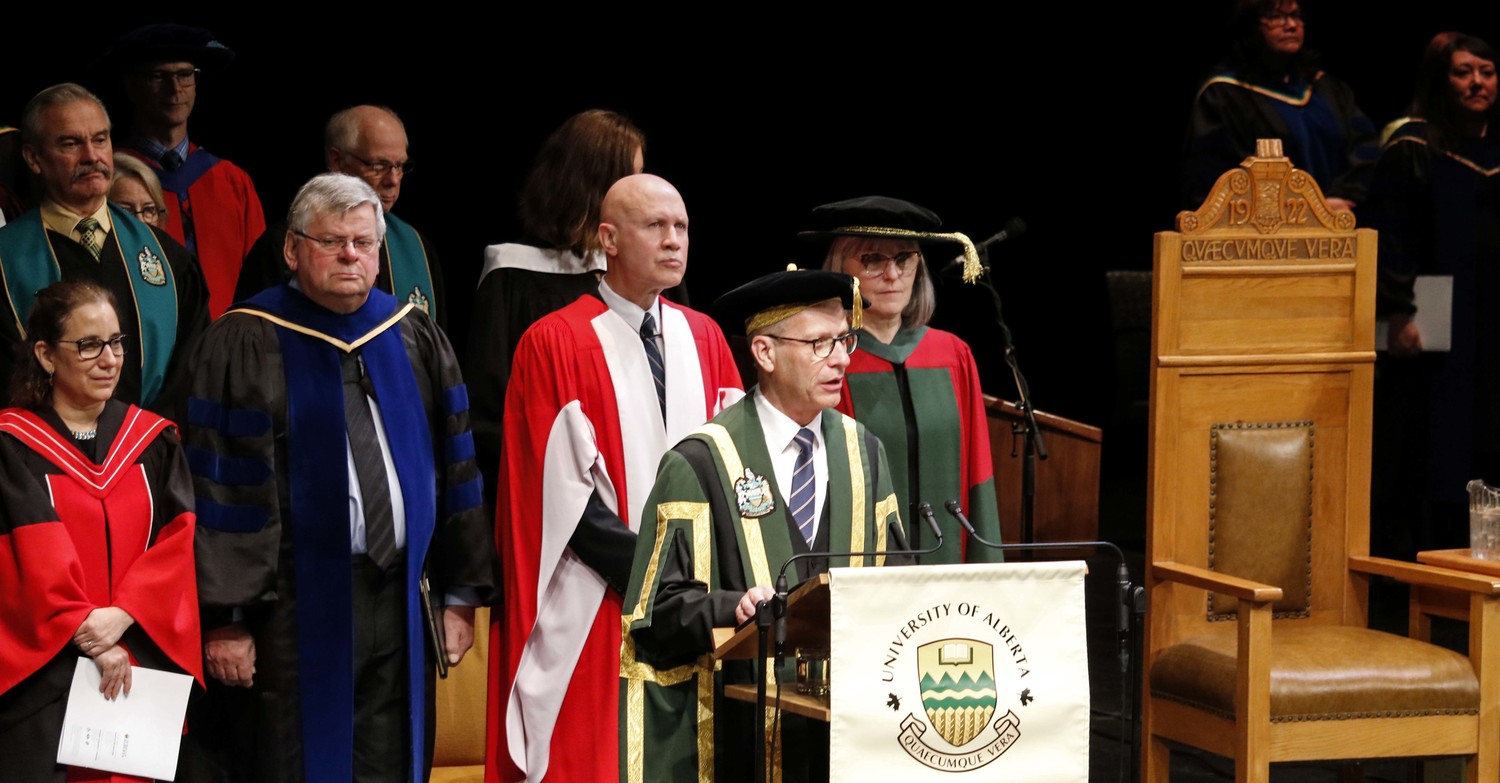 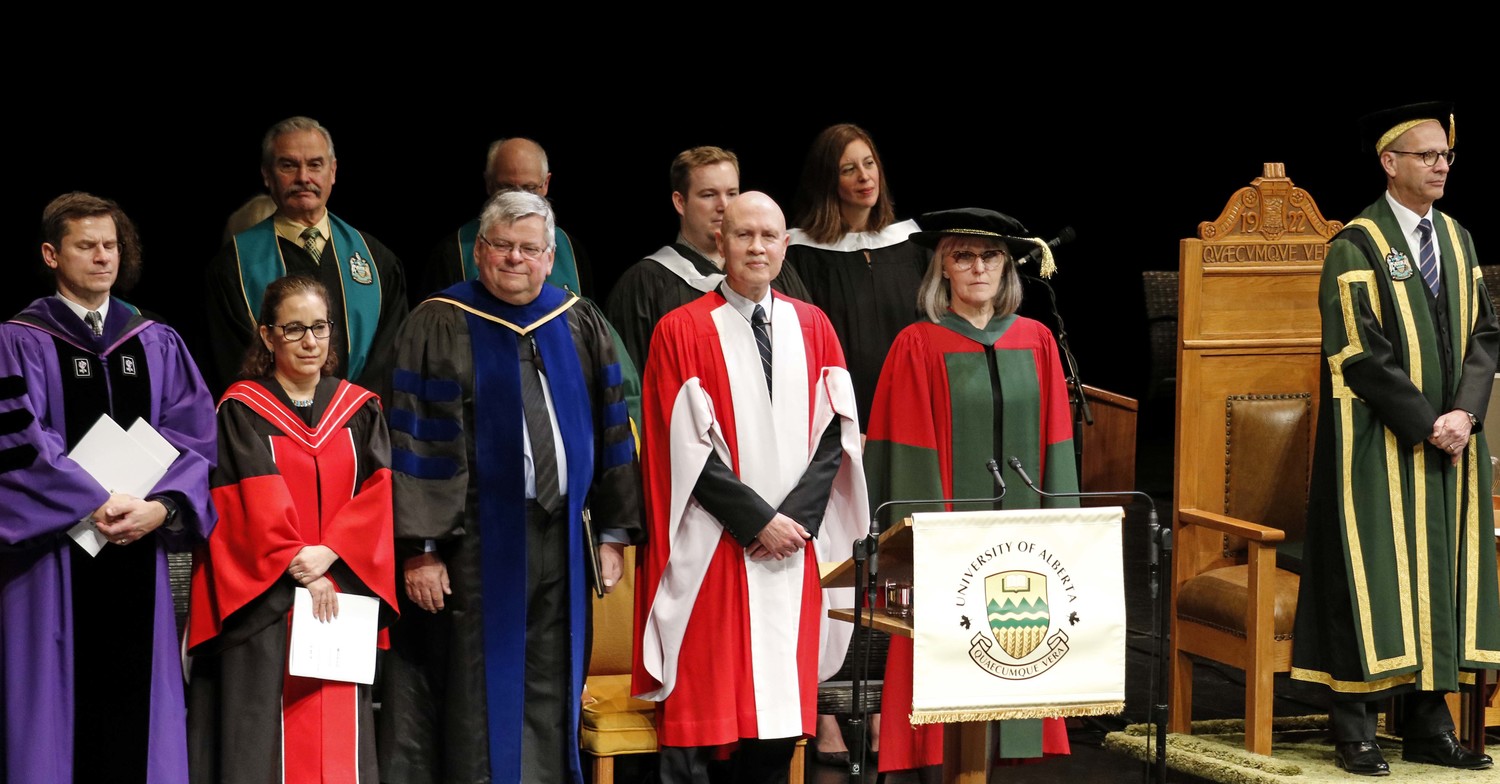 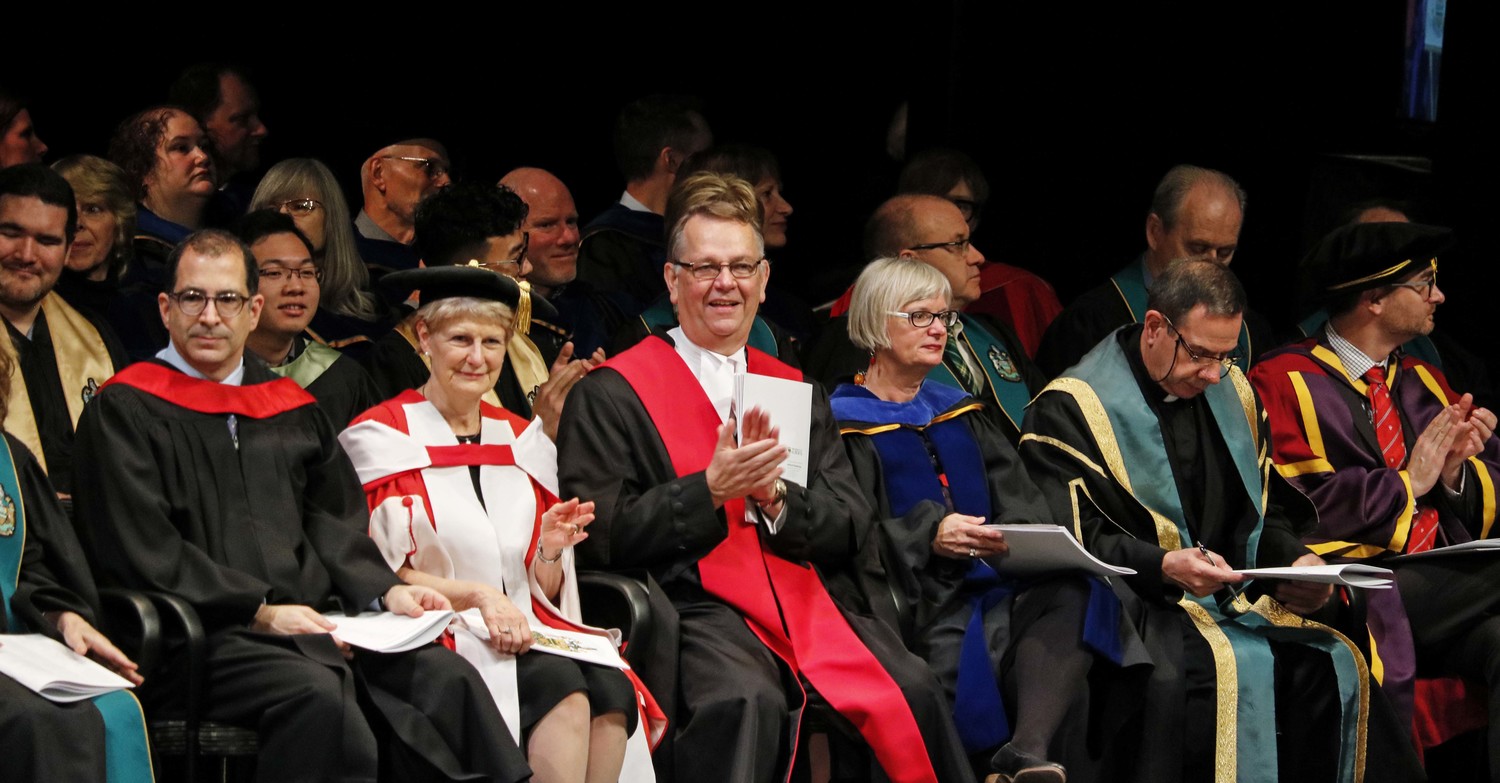 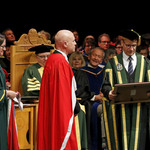 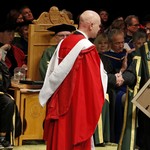 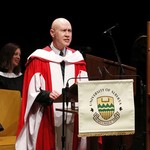 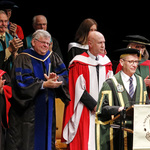 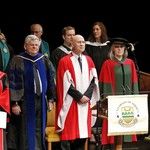 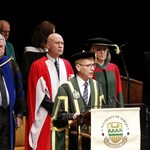 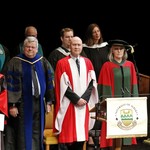 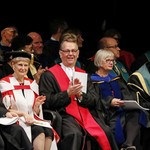 Jeremy Spurgeon, Director of Music at All Saints’ Anglican Cathedral, was presented an Honorary Doctor of Letters degree at the University of Alberta Fall Convocation Ceremony on November 21, 2018.

Many of Spurgeon’s friends and supporters, including the Rt. Rev. Dr. Jane Alexander, Bishop of Edmonton, and the Very Rev. Neil Gordon, Dean of Edmonton and rector of All Saints’ Cathedral, were present for the Convocation Ceremony at the Northern Alberta Jubilee Auditorium.

“Jeremy Spurgeon understands music’s universal beauty and voice more than most,” said Dr. Leonard Ratzlaff, Professor, Department of Music. “Growing up in Enfield, North London, he sang in the St. Paul’s Presbyterian Church Choir with his parents Mary and Thomas Spurgeon. From choir, to piano, to organ, Spurgeon’s talents have taken him to Westminster Abbey, London’s celebrated Wigmore Hall, the Geneva Conservatoire and our very own Winspear Centre and the Edmonton Symphony Orchestra. He first performed Handel’s Messiah with the Symphony in 1980, shortly after his arrival in Edmonton.

“He has a unique ability to combine outstanding ensemble awareness, musicianship and technical skills with a shared commitment to learning together. We celebrate Mr. Spurgeon’s dedication to his craft, we honour his enduring generosity of spirit as a performer, mentor and leader in the artistic community, and we celebrate the shared grace of a life devoted to music,” said Ratzlaff.

“In recognition of exemplary contributions to music as an enduring source of beauty, inspiration and grace, I desire to confer upon you the Honorary Degree of Doctor of Letters and to express the hope we shall continue to be enriched by your wise counsel for many years to come,” said University of Alberta Chancellor Douglas Stollery.

Spurgeon is also a recipient of the City of Edmonton Citation Award for Arts and Culture and, in 2015, was presented with the Music Excellence Award by the Anglican Church of Canada.

Upon accepting his degree, Spurgeon thanked his friends, colleagues and many teachers for their support and encouragement, especially his parents who enrolled their six-year-old son in piano lessons and, when he could reach the pedals, in organ lessons. Shortly after the age of 12, he became assistant organist of Enfield Parish Church and, while still in his teens, began to play on occasion for the Enfield choir at St. Paul’s Cathedral and Westminster Abbey.

At age 18, he won a place at the Royal Northern College of Music (RNCM), Manchester, where he gained scholarships to study both organ and piano accompaniment. He was organist at the Church of the Ascension, Hulme, and later organist and choir director at Bowdon Parish Church in the Diocese of Chester. After five years at the RNCM, he won a place at the Geneva Conservatoire to study organ with Lionel Rogg who, at the time, was arguably the greatest exponent of Bach’s organ music.

“I am humbled to be standing before all of you today and I must say that this is a somewhat overwhelming experience,” said Spurgeon, delivering the convocation address.

As a high school student in the UK, Spurgeon said his geography class studied western Canada through a whole semester. “I knew all about the railway measurements of the CN and CP lines, from the plains of Manitoba to the Kitimat Delta in BC,” he said.

At the Geneva Conservatoire, in 1979, a friend showed him an advertisement searching for a director of music at the Anglican Cathedral in Edmonton, Canada. “Was I interested? You bet,” he said. “I knew the area intimately and could perfectly place it on a dot distribution map.”

Upon completing his exam, Spurgeon boarded a plane to Edmonton where “wonderful opportunities have come my way for the last 38-plus years. These opportunities were enriched by the kindness, support and the encouragement of friends and colleagues that I gained through the Anglican Church of Canada and other church denominations, and the incredible arts community. I’m so grateful to have such magnificent people in my life.”

“Surround yourself with great people,” Spurgeon told the convocation. EM Forster begins his novel Howard’s End with a simple statement: ‘Only Connect.’ “What a captivating concept; connecting with those around you, forming the social infrastructure that weaves us all together.”

Spurgeon also reflected upon a quote by American writer Max Ehrmann that had been displayed on a wall in his childhood bedroom. It read: ‘Whether it is clear to you or not, the world is unfolding as it should.’ “With this in mind,” he said, “I would add ‘enjoy life’s journey and be open to unexpected opportunities. We all, every single one of us, can be important in the social infrastructure of this city, province, country and beyond. Think beyond yourselves and think beyond what you know, because there is a whole world to explore. And remember: always pay attention in geography class. You never know where life will take you.”

In commemoration of the presentation of Jeremy Spurgeon’s honorary degree, the University of Alberta Senate donated a book, The Box of Whistles, an Illustrated Book on Organ Cases, by John Norbury, to the Bruce Peel Special Collections Library.